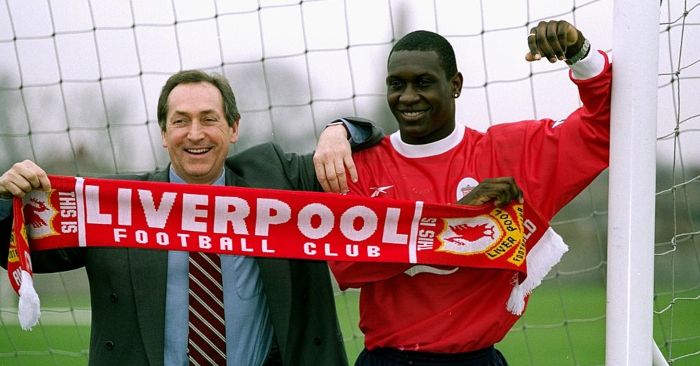 Emile Heskey doubted whether he had made the right choice in moving to Liverpool when he became their record signing.

Heskey was signed by Gerard Houllier in March 2000 after impressing for Leicester.

The striker became Liverpool’s most expensive signing at the time at £11m, but scored just three goals in his first 12 Premier League games.

His second season was a marked improvement, with 22 goals in 56 games contributing to Liverpool’s three trophies in 2000/01.

Heskey left the Reds in 2004 as something of an unheralded cult hero, but says his first period on Merseyside was his most difficult.

“It lasted six months” he told The Guardian.

“I had to grow up very quickly because I had kids, I had a girlfriend. I literally laid on the floor and started crying. I was like ‘What have I done? I don’t know if I have done the right thing’. But the weirdest thing was I’d go to training and I would be all right.

“Then like a drop of a hat I found a barber, I found friends, a routine. Yes, it was a tough time but it was weird, I was silly and, looking back, you think: why didn’t you just go and sit with mates?”