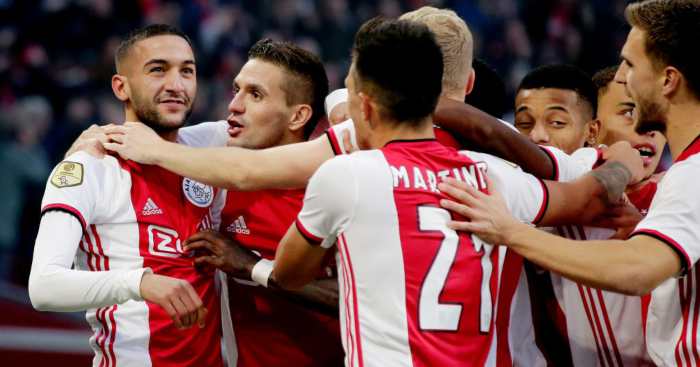 The Moroccan has five goals and five assists in ten Eredivisie matches this campaign to help Ajax move clear at the top of the table.

Working as a pundit on Studio Voetbal, Van der Vaart said: “I really hope he goes to Tottenham Hotspur. I sent a message today to Levy, I said ‘get Ziyech after this season’. I am convinced that he will become a sensation in London.”

Van der Vaart is not the first former Premier League player to recommend Ziyech as a good signing with Marc Overmars saying recently that Arsenal should sell Mesut Ozil and buy the Ajax midfielder.

Overmars told Voetbal International: “I am a bit surprised that it is still so quiet around Hakim.

“I think he has played better every year and his statistics are exceptionally good.

“Many clubs are increasingly looking at that. They look more at the numbers than at what he shows and what is happening around him.

“I think Hakim Ziyech is better than Mesut Ozil. I would tell Arsenal: sell him and you will get Hakim for half the price. But they didn’t listen to me. So it could just be that he stays with Ajax.”

In June, De Telegraaf claimed that Ajax had stuck a tempting €35m (£31m) price tag on the Moroccan’s head, with Liverpool and Arsenal the frontrunners for his signature.