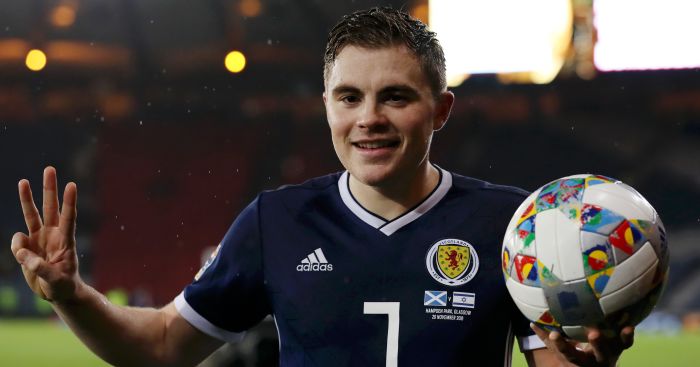 James Forrest scored a Nations League hat-trick as Scotland beat Israel 3-2 at Hampden Park to book a place in the 2020 European Championship play-off.

Alex McLeish’s side, who needed to win to leapfrog Israel to the top of Group C1, fell behind to former Celtic midfielder Beram Kayal’s stunning 30-yard opener.

But Hoops winger Forrest, who had scored his first two Scotland goals in the 4-0 win over Albania on Saturday, notched twice in the first half before grabbing a third in the 64th minute.

Israel’s Eran Zahavi reduced the deficit in the 75th minute and – amid a nervy finish – only a great save from Scotland goalkeeper Allan McGregor denied the visitors a late equaliser.

Portugal, already assured of their place in the Nations League Finals by finishing top of Group A3, drew 1-1 with Poland.

Arkadiusz Milik’s second half penalty cancelled out Andre Silva’s opener for Portugal and ensured Poland avoided slipping into the second seeded groups for Euro 2020 qualifying. Germany and Iceland both dropped out.

Manchester United defender Victor Lindelof and Marcus Berg fired Sweden to the top of Group B2 and promotion in a 2-0 home win against Russia.

Lindelof and Berg struck in either half in Stockholm as Sweden leapfrogged Russia into top spot.

George Tucudean fired the only goal in Romania’s 1-0 win in Montenegro, but it was not enough to gain them promotion.

Serbia clinched top spot thanks to a 4-1 home victory against Lithuania, but unbeaten Romania’s third group win was enough to lift them over Montenegro into second place.

In Group D3, Kosovo’s 4-0 home win against Azerbaijan saw them promoted after finishing five points clear at the top, while Malta drew 1-1 with the Faroe Islands.