The best of the PL under-21s features a keeper without a game and a striker with a better goal ratio than Thierry... 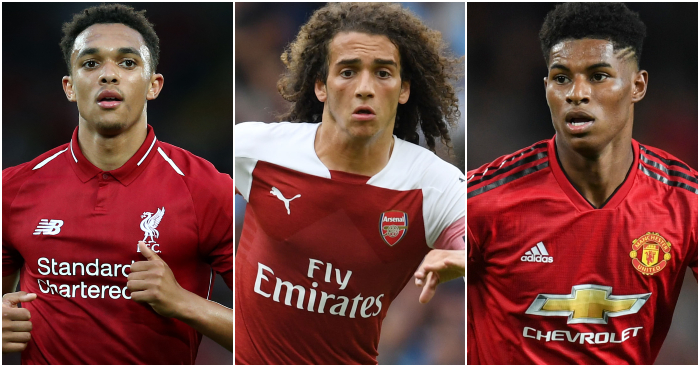 Premier League sides have named their 25-man squads, but they can include as many under-21s as they wish. There are at least 11 good ‘uns…

GK: Freddie Woodman
The 21-year-old World Cup winner has bags of potential but it’s hard to tell just how much given he hardly ever gets his gloves dirty. Woodman is currently fourth-choice at Newcastle, behind Martin Dubravka, Karl Darlow and Rob Elliot so a loan move would have made sense. He went to Aberdeen in January but only played five games, taking his total of senior appearances to 36 across the SPL, League Two, Scottish Cup, League Cup and FA Cup. He can’t live on that Under-20 World Cup Golden Glove forever, but it’s enough to get him in this XI.

RB: Trent Alexander-Arnold
Unlike Woodman, Alexander-Arnold does not lack experience having played more senior games just in the Premier League and Champions League despite being only 19. The Liverpool right-back spent his summer marking Cristiano Ronaldo in the Champions League final before heading off to Russia to play in the World Cup finals with England. Still, many aren’t certain this is even Alexander-Arnold’s best position…

CB: Ethan Ampadu
Some Chelsea fans were hoping that Ampadu would start the season in Chelsea’s first XI but the teenager who doesn’t turn 18 until next week hasn’t yet featured in any of Maurizio Sarri’s Premier League matchday squads. Still, there was little chance of Ampadu joining the loan exodus this summer, with the Europa League and domestic cups likely to give him plenty of time to shine in Sarri’s side.

LB: Ryan Sessegnon
The Fulham flier has only recently turned 18 but Sessegnon already has almost 90 senior appearances under his belt. He netted 15 Championship goals last season while furrowing up and down Slavisa Jokanovic’s left flank and it won’t be long before he’s doing the same for Gareth Southgate.

CM: Matteo Guendouzi
The Arsenal midfielder has been “a very big surprise” to everyone, not least Unai Emery. The 19-year-old was signed from second-tier Lorient in the summer with the future in mind but Guendouzi has started all four of Arsenal’s Premier League matches so far this term, taking the spotlight off Lucas Torriera somewhat.

CM: Phil Foden
Like Sessegnon, the Man City midfielder was said to be in Southgate’s thinking for the England squad named last week, despite only having played 51 minutes in the Premier League. Pep Guardiola is determined not to rush the 18-year-old, especially when his other options mean he has no need, but Foden’s time is coming.

LW: Ademola Lookman
Everton’s plan for Lookman isn’t entirely clear but what is apparent is their desire to keep the 20-year-old. RB Leipzig were desperate to bring the winger back permanently after a successful loan spell from January but £25million wasn’t enough to tempt the Toffees. Now let’s see what they do with him…

AM: Richarlison
The most expensive player in this XI, Richarlison can rotate positions with Lookman, whose route to the Everton first team he seems to be blocking. The £40million attacker has three goals in three games since moving to Goodison Park in the summer, which went some way to securing his first Brazil call-up.

RW: Marcus Rashford
The forward already has 125 senior appearances in the Manchester United first team and he’s still only 20. All of which seems to be forgotten when pundits suggest he needs to leave his boyhood club. If Ed Woodward sells Rashford, United fans will give him more to worry about than banners in the sky.

CF: Gabriel Jesus
If Guardiola had to choose between Jesus and Sergio Aguero, the Man City boss would probably pick the Brazilian over the 30-year-old City goalscoring record holder. That should tell you all you need to know about the 21-year-old, but if you need more convincing, his record of a Premier League goal every 119 minutes is only bettered by Harry Kane, Mo Salah and Aguero.