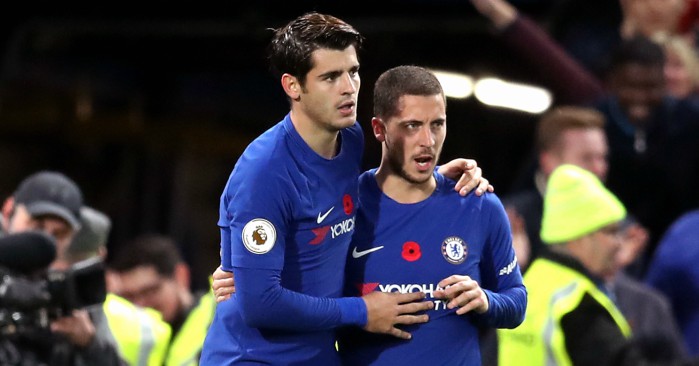 A real struggle this week, not to get everyone in their right positions, but finding 11 players to make the team. No strong full-back or wing-back performances, and a lot of in-and-out running in attacking midfield. It’s a 3-2-3-2:

Centre-Half: Mamadou Sakho (Crystal Palace) A superb game in defeat. Did all you could ask, including some decent passing on the counterattack. A couple of sub-par clearances, one ill-judged pass, but repelled everything thrown at him. Could he have got out to his left quicker on the sequence leading to the goal? Not sure. But he was so good otherwise, he gets the benefit of the doubt.

Centre-Half: Cesar Azpilicueta (Chelsea) The complete defender (for carpers out there, he’s won 65.3% of his aerial duels this year). Beaten once well away from goal by Romelu Lukaku, but otherwise impeccable. And oh, those crosses!

Centre-Half: Ben Mee (Burnley) The ultimate no-frills defender, he’s been very solid in recent weeks, and did everything right in helping to keep a clean sheet against Southampton. Jan Vertonghen (right now the best centre-half in the league along with Azpilicueta) was an equally good choice, but he’s already made the team once. Others in consideration were Andreas Christensen (good, but left Lukaku and Fellaini loose for United’s two best chances) and Ahmed Hegazi (very good, but when Huddersfield had a man sent off he had nothing to do for the last half hour).

Deep Midfielder: Isaac Hayden (Newcastle) A supremely assured performance in the middle of the park. Excellent in the air, secure in his passing, stayed composed even when the game opened up in the second half. Essentially a defender, but has the knack of getting forward and making himself useful a few times per game. Tired a bit at the end, but did more than enough to make the team. A former England youth international, and if he continues to develop, might get a senior England cap or two.

Deep Midfielder: Cesc Fabregas (Chelsea) Started out like he was going to run the show completely, then settled in for a worthy, although not exceptional game. Actually defended a bit too, although the most telling stat is the six key passes, four more than anyone else in the match. Both N’Golo Kanté and Nemanja Matic (no lie) came into consideration here, but Fabregas was more influential. Abdoulaye Doucouré was in the running until the Everton-Watford match went berserk.

Attacking Midfielder: Eden Hazard (Chelsea) Never found the net, and didn’t create many chances himself, but found lots of space, and was at the centre of everything that Fabregas wasn’t.

Attacking Midfielder: Richarlison (Watford) The only player that survived the Everton match with even a modicum of dignity. Was sometimes good, sometimes not good at all, and didn’t get the better of Jonjoe Kenny until the second half. But he finished one chance well and earned a late PK, and that squeezes him in.

Attacking Midfielder: Rajiv van La Parra (Huddersfield) And speaking of squeezing in, VLP becomes a VIP. Barely. He likes to run at people, and on Saturday caused a fair amount of havoc in the West Brom defence, forcing a yellow card foul in the process. But it looked like classic no-end-product stuff until his wonder strike late in the first half. Removed when the side went down to ten men, but in a surprisingly spare week he crashes the party. Christian Atsu deserves a mention for Newcastle.

Striker: Alvaro Morata (Chelsea) Was mostly ordinary in the first half, very good in the second, although he let a late chance get away. Really a pleasure to see a centre-forward do centre-forward things: his link-up play is as good as his goalscoring.

Striker: Mohamed Salah (Liverpool) As was noted in the Early Winner column, you can’t teach pace. Now that he’s started taking his chances, there’s no reason he can’t contend for the Golden Boot. Roberto Firmino and Sadio Mané also had good games, but Salah was the man.