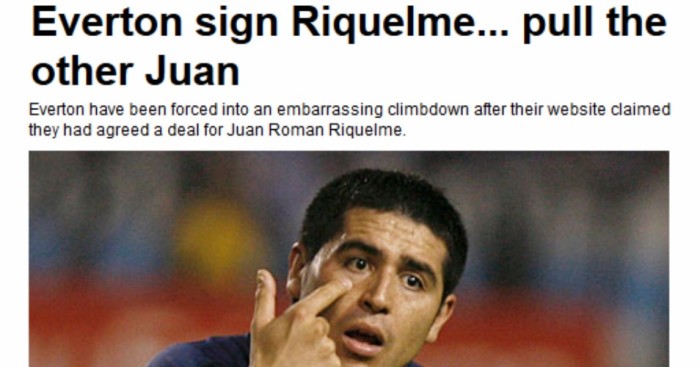 Juan Roman Riquelme
We’ve had a transfer rumour that managed to dupe a video game, but a link which has tricked even the official website of the club involved? Well that’s just bloody hilarious and wouldn’t ever happen.

It has, of course. In the summer of 2007, Juan Roman Riquelme was so regularly linked with Everton that the club decided enough was enough, announcing the deal via their official website. Within an hour the story was pulled, with a club spokesman providing the following explanation:

“During the process of uploading the new home page designs for the website some test data was displayed for a very short period of time and was immediately removed after it had been identified. Example data had been used during the testing process and this was unfortunately missed by our appointed web development company during the final upload.”

The dog had eaten their appointed web development company, basically.

The Daily Mail poked fun at the club’s ’embarrassing climbdown’, before claiming one month later that the Villarreal playmaker had ‘flown into Merseyside’ for last-minute talks. There was no ’embarrassing climbdown’ as their claim sank without a trace, and the Everton faithful instead lamented the retirement of a club legend who had stepped foot on the Goodison Park turf just once despite joining eight years ago.

Joao Moutinho
Spurs were perenially linked with then Porto midfielder Joao Moutinho from 2012, but the Toffees boast an even longer infatuation with the Portuguese star.

Back in June 2008, The Sun first reported of interest from David Moyes in Sporting Lisbon prodigy Moutinho. Then dubbed as a ‘£16m-rated’ star, the tabloid claimed just two months later that the Toffees would ‘up their bid’ to £13million, thereby getting their maths horribly wrong.

Moutinho came remarkably close to signing for Everton that summer, but there was little consensus over the eventual fee that the Toffees offered. The Daily Express went with both £18million and £13m within a month, the Daily Star reported of an £18m bid then later claimed it was a £12m one, while the Daily Mirror (£16m), The Guardian (£15m), the Daily Telegraph (£11.8m) and the News of the World (£18m) bickered amongst themselves.

The Daily Mirror resurrected the deal the following February, and in keeping with Moutinho tradition, reported that Everton were ‘lining up a £10m summer move’ for the midfielder. Two months later, they were merely ‘making inquiries’.

Alan Smith
Whether Alan Smith was at Leeds, Newcastle or Manchester United, Everton were interested.

David Moyes himself confirmed the Toffees had made a “substantial offer” for Leeds striker Smith in May of 2004, reported by Sky Sports to be around £7million. Smith had joined Manchester United for the same price by August.

Three relatively successful years at Old Trafford followed, before The Sun claimed in June 2007 that Everton would battle Aston Villa, Middlesbrough and Spurs to sign Smith. Despite naming four Premier League sides, the tabloid managed to get Smith’s next destination completely wrong; Newcastle signed him within a month.

Yet the story doesn’t end there. ‘Everton hope to complete the signing of Newcastle striker Alan Smith in a £3million deal on Monday,’ reported the Daily Mail in September 2008. ‘Smith is expected at Goodison Park on Monday morning for a medical after Newcastle agreed to let the former Leeds and Manchester United player leave.’
He stayed at St James’ Park for another four years.

Stephen Appiah
There are two key eras in sports reporting: pre-Sky sources and post-Sky sources. Before everything was ‘according to’ those famed sources, we instead had ‘Skysports.com understands’, which is where this link gained notoriety. A report in August 2007 claimed David Moyes was ‘weighing up a move’ for the then Fenerbahce midfielder. Rather delightfully, and surely non-coincidentally, The Guardian reported interest from the Toffees the day before.

The rumour actually originated from the Ghanaian press way back in 2005, and they were responsible for it resurfacing once more in 2009. Even The Metro turned their nose up at that time.