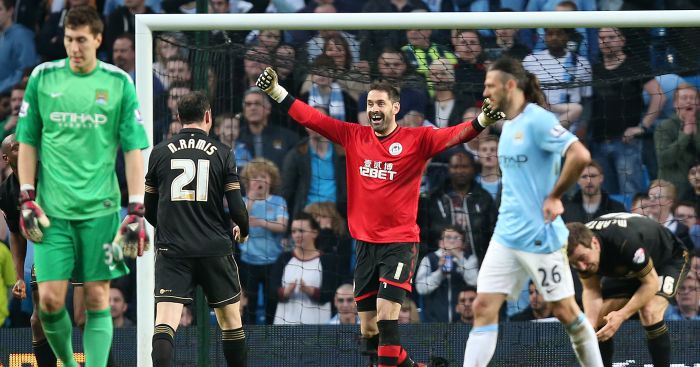 Winning the Quadruple is pretty hard, it turns out. Manchester City’s bold effort fell short at the hands of Tottenham, but which other English teams have had their eye on all the prizes and who denied them? The answers to the first part of that question are unsurprising; the answers to the second part are less predictable…

Spurs’ previous Manchester Quad-scuppering only became clear in hindsight. Nobody was even talking about Manchester United winning a treble, never mind a quadruple in December 1998 when Spurs beat them 3-1 in the League Cup quarter-final at White Hart Lane.

SPOILER ALERT: Manchester United would quite memorably go on to complete The Treble. As a fairly dreadful Spurs side went on to win the Worthington Cup by beating Wimbledon in the last four and Leicester in the final, it’s fair to think Fergie’s lads would probably have got that particular job done as well given everything else they were up to.

Bit harsh maybe to discuss an unbeaten Premier League season with “What if?” chatter, but Arsenal’s season really was a few moments here and there away from being something even more spectacular. The Gunners really should have won at least one of the cups that year, but somehow contrived to win none.

It was Middlesbrough who landed the first knockout cup blow in the last four of the League Cup, before old rivals Manchester United prevailed at the same stage of the FA Cup.

Chelsea got all the way to May with the Quad still possible having pocketed the League Cup and reached the FA Cup final – which they would win – while battling with Manchester United for the league title. Liverpool awaited in the Champions League semi-final.

Chelsea led 1-0 after the first leg at Stamford Bridge, but Daniel Agger’s goal levelled the tie at Anfield and sent it to penalties where Arjen Robben and Geremi misses left Liverpool 4-1 winners.

In an unwanted omen for City, Chelsea then drew their three remaining Premier League games – making it five league draws in a row – as Manchester United took the title.

Ten years after being denied by Spurs in their previous quad hunt, United got revenge – it was all anybody could talk about in the build-up – by beating Tottenham on penalties in the League Cup final.

It all went tits up in April, though, when United failed to recreate that shootout success after another goalless 120 minutes against Everton in the FA Cup semi-final.

United did win eight of their last nine games to secure the Premier League title, including that weird week where Federico Macheda became the most important footballer in the country, but failed to defend their Champions League crown after getting schooled by Barcelona in the final. Not for the last time.

Sunderland had been dispatched in the League Cup final a week earlier, and City would go on to pip slippy Liverpool to the league title with five straight wins at the end of the season. But the quad dream came crashing down a week after the League Cup win as Wigan stunned the Etihad with a 2-1 victory in the FA Cup quarter-final before Barcelona completed the formalities of a last-16 Champions League win with a 2-1 victory at Camp Nou having won the first leg 2-0 in Manchester.

What witchcraft is this? Wigan again denying the League Cup winners and record-breaking Premier League champions in the FA Cup. Fifth round this time.

As this season, the Champions League tilt would come unstuck in a mad game against domestic opposition miles beneath them in the Premier League table. Still, at least Pep has avoided any more Wigan-based heartache this time around.