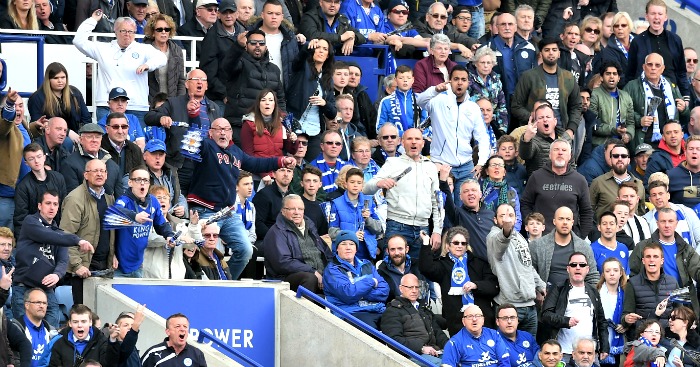 West Ham co-chairmen David Sullivan and David Gold have complained of being targeted for abuse by Leicester supporters in Sunday’s draw at the Walkers Stadium.

The 2-2 result came as a blow to Leicester’s Barclays Premier League title ambitions, with only a late penalty from Leonardo Ulloa sparing the Foxes from defeat.

Leicester led through Jamie Vardy’s goal, but the striker was later sent off and Andy Carroll’s penalty drew the teams level before Aaron Cresswell fired West Ham ahead. Carroll’s challenge on Jeff Schlupp was punished with the stoppage-time penalty from which Leicester forced the draw.

Sullivan told the Daily Mirror: “We didn’t stay to applaud our own players off as we felt threatened. We’ve spoken to Leicester and they’ve told us they would look into it.”

Gold wrote on Twitter: “Elderly Leicester fans turned into monsters when WHU went 2-1 up then returned to nice old people when LCFC equalised.”

He added on Tuesday: “I want Leicester to win the PL and I am pleased for their fans but their behaviour towards us was unacceptable.”

Gary Jacob reports an exclusive in The Times on the behaviour of Leicester fans at the King Power Stadium on Sunday, claiming that certain sections of the support ‘threw drinks’ at referee Jon Moss after the match.

Moss was also ‘subjected to verbal abuse from club officials in the players’ tunnel’ post match, writes Jacob, who adds:

‘The Times understands that Moss allegedly suffered further abuse as he headed into the players’ tunnel after the game, with home supporters said to have thrown water and other drinks on him, while at least one Leicester player and a member of the club’s staff angrily criticised his performance and his ability to referee.

‘The FA is investigating the incidents in the tunnel, which it is understood Moss intended to include in his report that led to yesterday’s charges. Leicester declined to comment last night when asked about the conduct of their supporters and employees.’