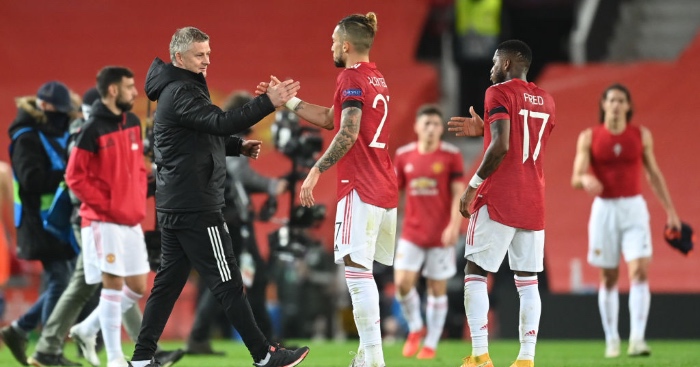 Manchester United take on Manchester City this weekend as they look to put their Champions League disappointment behind them.

With the way things have gone this season, you certainly wouldn’t put a win past United – no matter how bad things are. That was definitely the feeling when Mark Smith and Sarah Winterburn discussed this fixture on the latest episode of the Big Weekend on YouTube.

Sarah said: “Some think that Man United will win. This is how this stuff goes at the moment. This is Man United in 2020 – just as they were in 2019 and 2018. Just doing enough. Constantly just doing enough. Having a massive blow and then coming back, pulling something out of the bag. Sometimes it happens – quite often it happens in one game. First half bad, second half not so bad.

“Tuesday night they were terrible for three quarters and then turned it on for a quarter. As long as these fractions keep changing this could be disastrous. But this is Man United. People talk about Man United coming back to the way Man United were – I’m afraid that’s a long, long time ago now.

Things are looking rather bleak for United at this moment in time, but a win over City could take Solskjaer’s men within two points of the top of the Premier League table.

Sarah and Mark also discussed the importance of a good start to Saturday’s derby. Winty said: “As we found out against RB Leipzig in mid-week… you can’t give two goal leads away to good teams. They go behind against Manchester City on Saturday, I don’t think that’s going to work. They’re going to have to play a different game. Now can they play a different game? I’m not sure.”