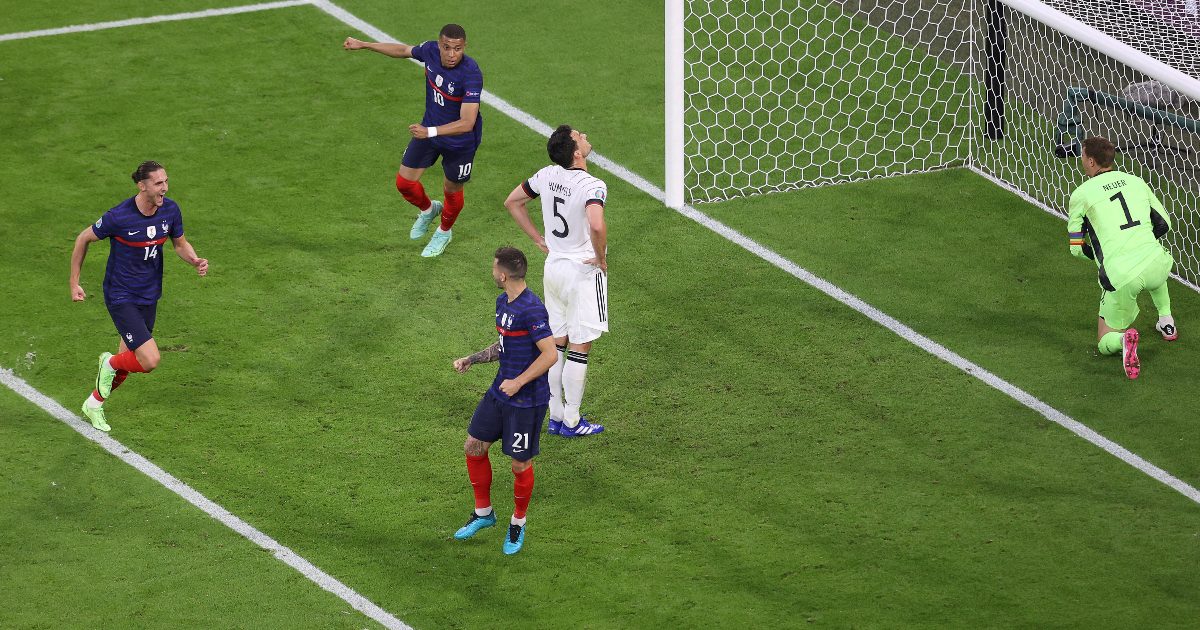 A first half own-goal from Germany defender Mats Hummels secures all three points for France in their opening game in Group F.

Hummels could not adjust his feet quickly enough, turning a Lucas Hernandez cross past Manuel Neuer after 20 minutes of the Group F clash.

Kylian Mbappe and Karim Benzema had goals ruled out for offside in the second half but it mattered little in the end as the world champions took a precious three precious points at the Allianz Arena.

Ahead of one of the most anticipated matches of the competition there was a bizarre incident just before the kick-off when a protestor parachuted into the stadium and almost crashed into supporters before landing heavily on the pitch and being led away by security.

With Portugal beating Hungary 3-0 earlier on in the other Group F game, it already leaves Germany with plenty of work to do to qualify for the knockout stages.

France started much the more assured team and deservedly went ahead. Paul Pogba stretched Germany’s defence as he found Hernandez with a ball over the top on the left, the full-back volleyed the ball back across goal and Hummels could only clumsily shin it past his own goalkeeper.

Germany grew into the game, with Thomas Muller and Serge Gnabry seeing half-chances flash wide, but France went into the interval a goal up.

The parachutist was not the only odd incident caught on camera as Antonio Rudiger appeared to bite Pogba on the shoulder blade late in the first half. The France midfielder complained to the referee but nothing was done about it.

Germany were much improved in the second half and put the France defence under pressure, with Gnabry wasting a presentable chance by firing over from a cross when unmarked.

Mbappe thought he had scored a brilliant second goal after twisting and turning down the left side of the penalty area to finish across Neuer and in off the far post, only for a delayed offside flag to deny him a tremendous goal.

For all of Germany’s pressure, Hugo Lloris was never really tested and France went closest to the next goal as Benzema’s tap-in was ruled out by VAR for another Mbappe offside.

Substitute Leroy Sane wastefully fired over the crossbar from a free-kick on the edge of the area as the hosts saw their last chance pass them by.

The result leaves Germany facing a huge game against Portugal on Saturday, while France will look to all-but seal their place in the last-16 with victory against Hungary in Budapest.