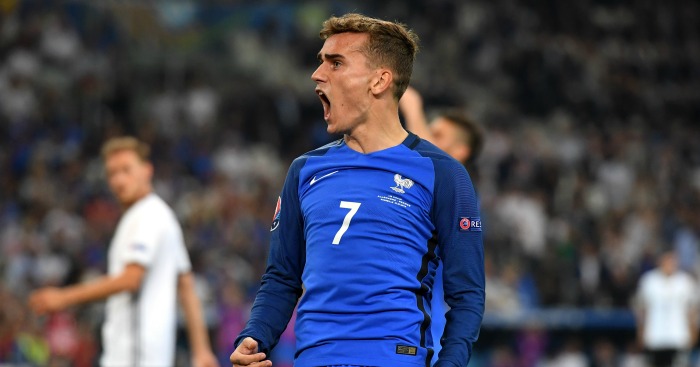 Antoine Griezmann scored both goals as France beat Germany 2-0 to book their place in the Euro 2016 final.

The 25-year-old Atletico Madrid forward became the highest scorer at a single European Championships since the great Michel Platini scored nine for Les Bleus in 1984.

They won the tournament on home soil that year and, having also lifted the 1998 World Cup in Paris, the omens are all pointing towards another domestic triumph against Portugal at the Stade de France on Sunday.

Griezmann’s first came via a controversially-awarded penalty in first-half added time but there was no debate about his second – and sixth of the tournament – 18 minutes from the end.

It was the first time any host nation had prevailed over the Germans in tournament football since England at the 1966 World Cup as France registered their first victory over their fellow European heavyweights since 1958.

The game was a tale of clinical finishing triumphing over territorial advantage as Germany bossed play for the majority of the game but struggled to create anything in the way of clear-cut chances.

They enjoyed almost 70 per cent first-half possession in a performance of control and dominance which was lacking only a goal – and that proved to be their undoing.

Griezmann’s early weak effort after cutting inside extended Manuel Neuer down to his left but did not seriously trouble the German goalkeeper, but aside from a couple of comfortable free-kicks the play was predominantly in one direction.

Hugo Lloris saved from Emre Can, making his first appearance of the tournament, and Bastian Schweinsteiger while centre-back Samuel Umtiti just managed to hack the ball off the toes of Thomas Muller on edge of six-yard area as the world champions produced the type of football worthy of the title as their movement and passing left France chasing shadows.

Without the defensive cover of Leicester’s Premier League-winning midfielder N’Golo Kante, Blaise Matuidi and Paul Pogba – for whom Manchester United have reportedly opened negotiations over a potential world-record £100million transfer from Juventus – were almost overwhelmed in the centre of the park.

France’s one clear chance fell to Olivier Giroud but the Arsenal striker’s lack of pace when clean through allowed Benedikt Howedes to get across and dispossess him.

Then came the controversy when Patrice Evra’s header from a corner hit the raised arm of a jumping Schweinsteiger and, virtually unbeknown to the teams and rest of the stadium, Italian referee Nicola Rizzoli awarded a penalty which Griezmann subsequently slotted home.

Having tried to start the second half positively France were soon pushed back as Germany quickly re-established their dominance still without actually threatening too much.

France coach Didier Deschamps delayed introducing Kante until 20 minutes from the end, removing the more attack-minded Dimitri Payet, but the midfielder’s job was immediately made easier by France’s second.

Joshua Kimmich’s mistake inside his own penalty area presented the ball to Pogba, whose cross was palmed away by Neuer straight to Griezmann who stabbed home.

Germany persisted, with Kimmich almost making up for his error by shooting against the post, substitute Leroy Sane nearly scoring with his first touch, Howedes heading over and Kimmich denied by a brilliant Lloris save at the death as their lack of ingenuity in the final third proved their undoing.