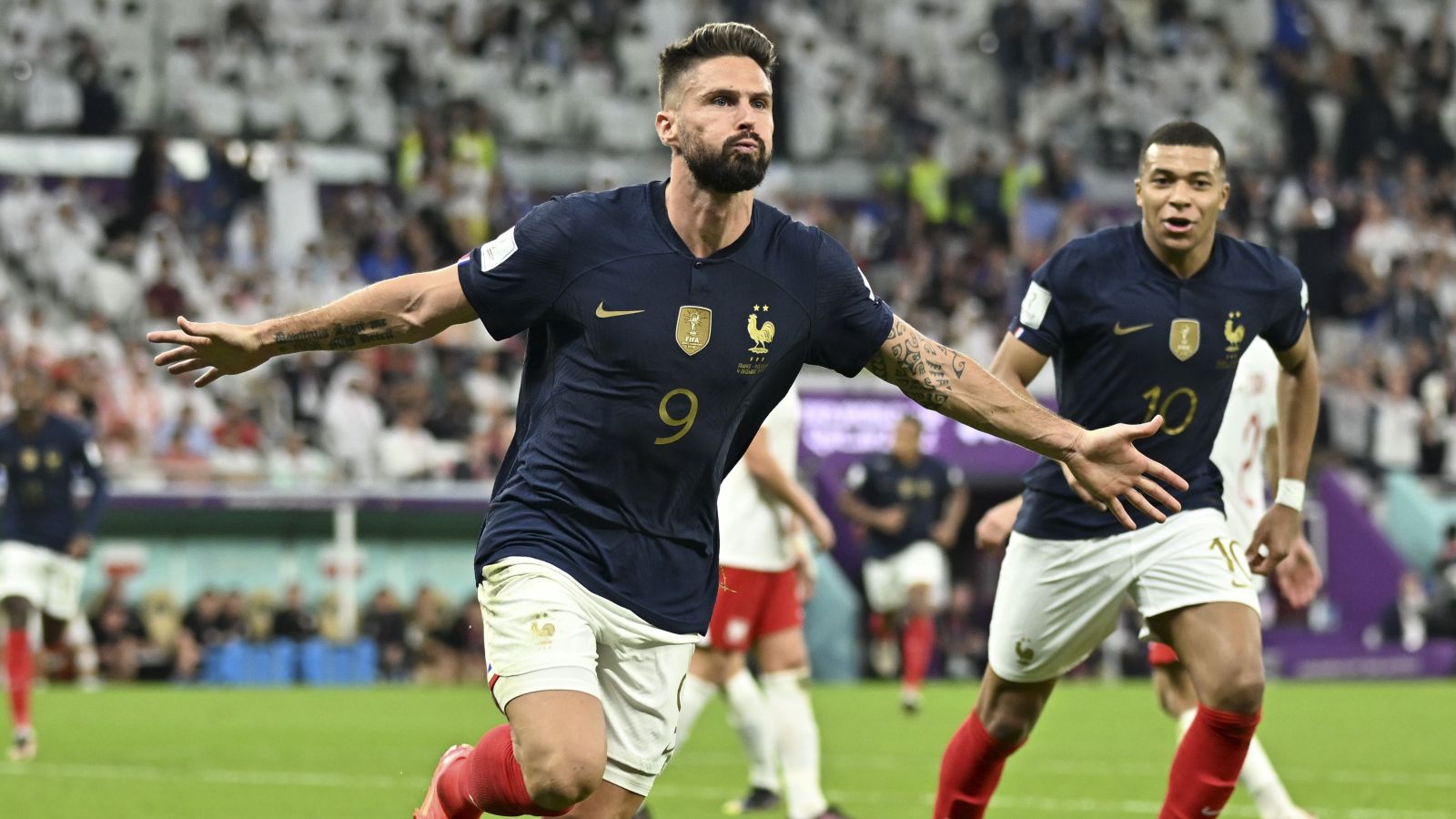 Giroud’s goal makes him France’s outright top scorer with 52 goals. He is now one clear of Arsenal legend Thierry Henry.

Poland had their moments and Robert Lewandowski scored a stoppage-time consolation from the penalty spot for his nation but the night belonged to Mbappe.

It was the Paris St Germain attackers’ fourth and fifth goals of the tournament that set up a last-eight clash with England.

France boss Didier Deschamps restored his big-hitters after resting a number of players for their final Group D fixture with Tunisia, which ended with a shock loss.

Captain Hugo Lloris returned in goal and made a record-equalling 142nd appearance for his national team but saw the majority of the early action at Al Thumama Stadium occur down the other end of the pitch.

Raphael Varane sent an early header wide before Kamil Glik was a whisker away from putting through his own net.

Aston Villa defender Matty Cash was tasked with trying to stop Mbappe, who looked in the mood from the off, and Poland goalkeeper Wojciech Szczesny had to be alert to deny Aurelien Tchouameni and Ousmane Dembele during the opening exchanges.

Lewandowski was being forced to bide his time but showed his intent with a fierce left-footed strike midway through the first half that sailed a few inches wide.

Giroud slid an excellent chance wide at the back post soon after before Poland, who were playing their first knockout clash at a World Cup in 36 years, enjoyed their best spell of the last-16 tie.

Lewandowski hit a free-kick into the wall and Cash scuffed a shot wide but the golden opportunity for the underdogs in Doha arrived with seven minutes of the first half remaining.

Bartosz Bereszynski’s cross found Piotr Zielinski but he fired straight at Lloris from inside the penalty area and after his follow-up effort blocked, Jakub Kaminski saw his effort poked away off the line by Varane.

With Poland still dwelling on that moment, France scented blood and Giroud provided the breakthrough with 44 minutes on the clock.

Mbappe played into the feet of Giroud, who ran away from Przemyslaw Frankowski and drilled into the ground and beyond Szczesny.

Giroud had the ball in the net again not long after half-time but the whistle had already blown for a foul on Szczesny, who required brief treatment alongside Cash and Varane for a coming together.

It felt a matter of time before France moved through the gears and Mbappe added the decisive second goal in the 76th minute.

An Antoine Griezmann clearance turned into the perfect long ball for Giroud, who plucked it out of the sky and combined with Dembele.

In a flash Dembele had recycled the ball to Mbappe, who took a touch and whipped an effort into the roof of the net from 16 yards.

A fifth goal at this World Cup for the PSG attacker arrived soon after.

Substitute Marcus Thuram passed into Mbappe, who got in front of Arkadiusz Milik and opened up his body to curl into the top corner with Szczesny’s hand not strong enough to stop the effort.

Poland were out bar the shouting but they did have the final say on proceedings when Lewandowski scored from the penalty spot in the ninth minute of stoppage time.

Dayot Upamecano was penalised for handball and Lewandowski had two bites at the cherry from 12 yards after his first effort – saved by Lloris – had to be retaken for an infringement.

But despite the late spot-kick, it was France and Mbappe’s night.

READ MORE: France will need more than Mbappe moments if they’re to retain the World Cup