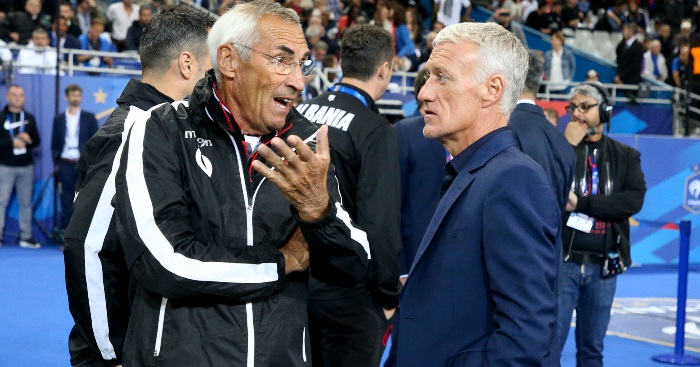 France coach Didier Deschamps offered a public apology after the wrong national anthem was played for opponents Albania before kick-off in Paris.

A mix-up saw the national anthem of Andorra played by mistake, resulting in a seven-minute delay as Albania would not start the match without the error being rectified.

“I apologised to the bench and the coach,” Deschamps told a press conference.

“It’s something that should not happen, but it happened. I understand the position of the Albanians and it is logical that we waited until the Albanians could have their anthem before that match.”

Once the Euro 2020 qualifier started, France eased to a 4-1 victory that keeps the world champions top of Group H on goal difference.

Just when you think you've seen it all…🤦‍♂

In an embarrassing mix-up, the wrong national anthem was played for Albania before they played France in their #EURO2020 Qualifier on Saturday! 😬

“When you have a Kingsley Coman in this form, it’s hard to stop him,” Deschamps said.

“It’s been a while since he’s been with us. He has always had his qualities but he is more decisive and effective.

“When he is like that, it’s hard for his opponents. It’s nice to see him on such a level.”

Chelsea’s Olivier Giroud and debutant Jonathan Ikone were the other scorers before goalkeeper Hugo Lloris conceded a late penalty which was converted by Sokol Cikalleshi.

Deschamps believes his side have improved from their last round of qualifiers and he is looking for them to further strengthen their position against minnows Andorra on Tuesday.

“There were a lot of very good things tonight. But we could have been more efficient,” he added.

“From the start of the second half we lacked the finish on some beautiful moves.

“We did the right thing, even though we relaxed at the end. It’s rare that we made a match with so many passes, I think over 900 – and not just easy passes.

“There is a lot of cohesion, something we did not have a few months back.”

His side may only be a year on from winning the World Cup but Deschamps is looking to the future and believes Ikone could play a significant part.

“That’s also my role. It’s about incorporating young people, looking to the future, and when there is quality they will have game time,” he said.