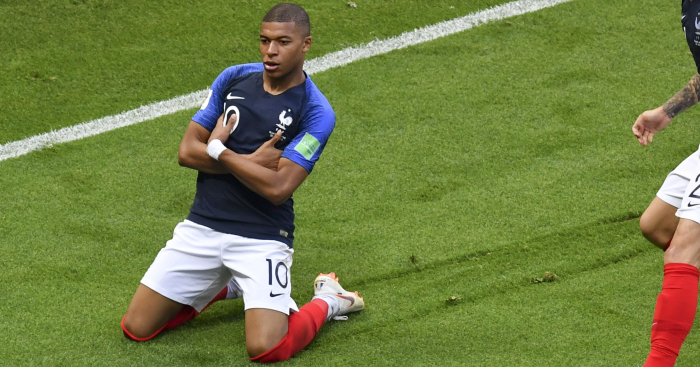 Allez les blur! That was all Argentina saw of Kylian Mbappe in Kazan where one all-time great probably left the World Cup stage while an up-and-coming superstar truly announced his presence on it.

In the end, not even Lionel Messi could drag this Argentina rabble any further. The Barcelona star will be 35 at Qatar 2022 and though you would not bet against him being there, surely even his superpowers are no match for the passing of time.

As Messi takes his team home, Mbappe leads his to Nizhny Novgorod. And despite the competition for status in this France side, the youngster truly is its main man.

Paul Pogba has spoken of his desire to be France’s leader, while Antoine Griezmann would also stake a fair claim to a chunk of the acclaim. But Mbappe is the talisman. Pogba and Griezmann can define the biggest matches; Mbappe, like Messi, has the potential to define an era.

That’s some pressure to heap on a 19-year-old, but there is no sign yet that the Parisian cannot handle it. After France stuttered through the group stage, they needed a kickstart against Argentina, who had already received theirs in the final moments of their previous game.

Mbappe offered that kick from the start. The Argentina players, with an average age of 30, could not stop the teenager by fair means, resorting to foul instead. His pace and power, which drew comparisons to the all-time greats, drew two free-kicks on the edge of the box before the 10th minute, just prior to a 75-yard run though the Argentina midfield and defence which earned France their opener from the spot.

Phenomenal run from Mbappe. Reminds me so much of Brazilian Ronaldo.

In Mbappe’s case, those comparisons are not hyperbole. He has been doing similar things for two years since bursting on the scene at Monaco before becoming the world’s second-most expensive player ever. If the first, Neymar, does want to leave PSG, with Mbappe ready to take his crown, it is hard to see how in the long run they will be much worse off without the star Real Madrid are said to be willing to pay over £300million for.

Like his burst to earn the spot-kick, Mbappe’s two goals in the second period were Ronaldo-esque. The first, a three-touch finish while finding and exploiting the only space in a packed box, rivals Messi’s on Tuesday for majesty, and his double was completed by a clinical strike after a sprint to complete a move which started with Hugo Lloris.

Despite his prodigious talent, as Messi has highlighted in recent weeks, Mbappe still needs the environment to perform. That is the coach’s job.

Despite setting a new record for games in charges of Les Bleus, Didier Deschamps hasn’t impressed. He’s the analogue coach in a digital age, according to Daniel Storey, and given all the talent at his disposal, it is hard to fathom why, after 79 matches at the helm, he was still to settle on either a formation or the personnel to fit into it.

Deschamps is not entirely to blame. The big names have too often failed to justify their reputations – Pogba, Griezmann et al have certainly never succeeded at shining in unison. But, at the 80th time of trying, perhaps the coach has stumbled upon the winning formula.

It may not curry favour with Griezmann and Pogba. Griezmann started the tournament at the head of the front line, with Mbappe and Ousmane Dembele flying either side of him. It was there he thrived most when making his name at Atletico, and France gave him that platform during the Euros two years ago to win the Golden Boot. Now, however, Deschamps’ men look more balanced with a centre-forward to pivot around.

Pogba would prefer to be further forward too. The Manchester United enigma has tried almost every position between defence and centre-forward at Old Trafford and none have seemed to satisfy him. Jose Mourinho’s exasperation with his record signing is entirely understandable. He bought Pogba to play in the same position Deschamps employed the 25-year-old against Argentina – as one of the two deeper midfielders, alongside a retriever.

It should be perfect for him. His energy, if matched by his desire, should allow him to get forward without the ball, while starting from deeper means he can get on the ball, facing the opposition goal, to carry it through lines or pass beyond them.

France’s fourth goal, a sublime move from back to front, highlighted how Pogba can make a positive impact in that position without being directly involved. When N’Golo Kante turns in possession on the edge of his own box, Pogba’s presence drags Argentina’s screener Javier Mascherano well into France’s half, creating the passing line directly into Griezmann. His pass around the corner into Blaise Matuidi is the trigger for France’s attack, and Mbappe on the opposite side, to fly.

Pogba, though, appears to believe he is a No.10. Deschamps, for all his faults had that sussed almost three years ago.

“I know he’s not a No 10,” he said while Pogba was at Juventus. “Not a second striker, and I always leave him the freedom to go forward, but a midfielder has to do defensive work. Maybe it’s not what he likes most, but it’s important for the team.”

That’s the message Mourinho has been trying to convey without much success. If Pogba chooses to listen to both of his managers then it may well lead to all the honours, individually and collectively, that he craves.

If he susses that then of course there remains room for Pogba to be a key leader in this team. But the future of France belongs to Mbappe. So too, very soon, could the world.