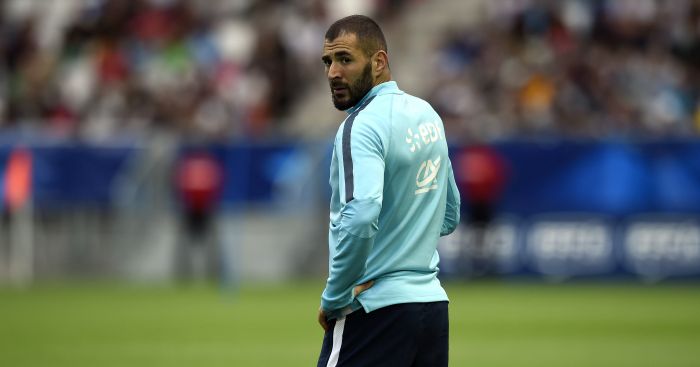 Karim Benzema will not be selected for France’s Euro 2016 campaign, the country’s football federation (FFF) has announced.

Benzema pleaded his case for a recall to the national side by posting a video on Facebook, but has today been told by the FFF that he will play no part in this summer’s tournament.

The Real Madrid frontman has not played for his country since being questioned by police in November in connection to an alleged blackmail attempt against France team-mate Mathieu Valbuena, over a sextape reportedly showing Valbuena and his partner.

And concerns over Benzema’s reintegration into the squad have led to the decision to rule a recall.

“The president of the federation and the coach would agree that athletic performance is an important but not exclusive criteria for selecting the France national team.

“The ability of players work towards unity, in and around the group, are also taken into account.

“As a result, Noel Le Graet and Didier Deschamps decided that Karim Benzema will not participate in Euro 2016.”

Benzema posted on Twitter: “Unfortunately for me and for all those who have always supported me. I am not selected for our Euro in France…”.

Ahead of the decision, Benzema wrote on his Facebook page: “Whatever happens… Once a Blue, always a Blue!”

The post was accompanied by a four-minute video showing a selection of Benzema’s 27 international goals and featuring prominently his selection as captain for last year’s friendly against Brazil.

It was soundtracked by the 1971 hit ‘Peace Train’ by Cat Stevens, now known as Yusuf Islam.

Benzema has won the Primera Division and the Champions League with Real as well as twice lifting the Copa del Rey.

He won four Ligue 1 titles and a Coupe de France with his previous club Lyon and was part of the France side which won the European Under-17 Championship in 2004.