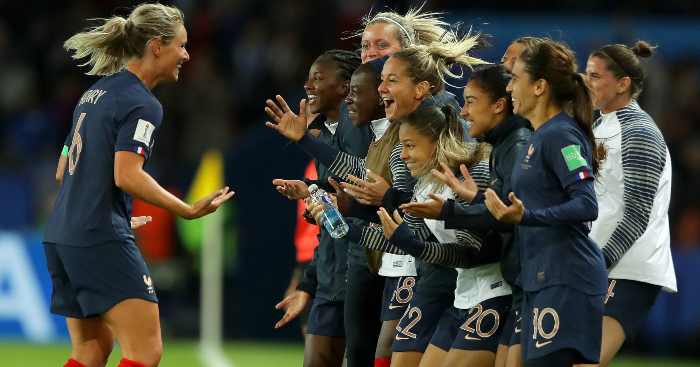 Boss Corinne Diacre stressed the need for France to keep their feet on the ground after the hosts’ 4-0 victory over South Korea in the opening match of the Women’s World Cup.

Diacre said in the post-match press conference: “We’ve won tonight’s match but this is just one step on the road and we have six more steps to take if we are to go all the way with regard to our ambitions.

“We are playing well at the moment but we need to keep our feet on the ground and we need to continue working.”

France had the ball in the net between Le Sommer’s ninth-minute opener and Renard’s brace, but Griedge Mbock Bathy’s volley was ruled out for offside following a VAR check.

Diacre added: “I think we started the game well. We didn’t lose track of things after that goal was disallowed.

“What was important was scoring a second goal before half-time, and we even did better than that because we found a third goal as well. We’d made things easy by half-time.”

Renard, who converted from corners in the 35th minute and first-half stoppage time, said: “We knew that it was going to be a very emotional evening, but I think we managed it well.

“When you have more than 45,000 people singing the French national anthem obviously it does drive you forward.

“I think we started the game very well and we really made the most of the crowd’s support.”

South Korea gave France very little to worry about, with Lee Mina dragging a shot wide in the second half when they were presented with their best scoring opportunity.

Boss Yoon Dukyeo said: “France is the host of this event and they are potential winners. They showed how strong they are.

“Most of the players are well experienced. They showed a great harmony amongst the midfielders.

“I know Renard gets a lot of goals at set-pieces, so we prepared for that, but in the end we conceded goals in such situations. I believe that is the strength of the French team.”