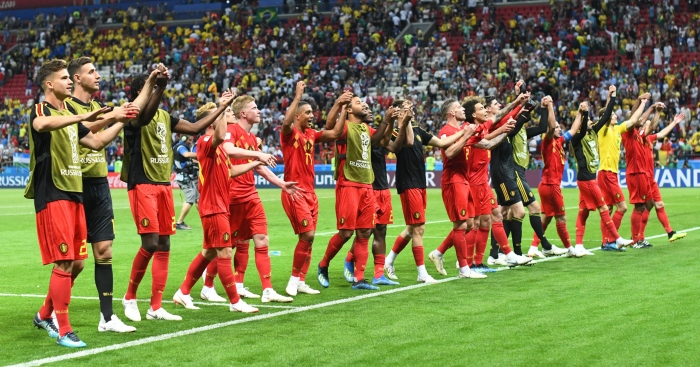 Life’s greatest driver isn’t wealth or love or fear or pain, but the knowledge that there is the potential for something better. Without potential, acquisition of wealth is meaningless, love is miserable, fear is all-consuming, and pain is unbearable. We need to know there is potential in order to keep going, and while achieving that potential doesn’t necessarily lead to happiness, failing to achieve our perceived potential is the surest path to recrimination and regret.

Potential is the reason we keep coming back to football time and again, despite the constant heartbreak involved in supporting any club or country. And it’s the reason tonight’s World Cup semi-final is about as good as this game gets. Well…potentially.

Both Roberto Martinez and Didier Deschamps travelled to Russia with incredibly talented squads, myriad selection headaches, and plenty of doubts about how to squeeze maximum capability out of their undoubtedly brilliant players. Neither man has entirely answered those questions, but both have suggested there is more in their bag of tricks than they had been given credit for, boldly making tactical switches for the knockout phase after breezing sleepily through their respective groups.

The Round of 16 ties involving these sides were the most captivating and scintillating games yet at this fabulous World Cup, with both semi-finalists come from behind to win in blistering style. Kylian Mbappe’s revelatory coming-of-age performance inspired France back from 2-1 down to 4-2 up with three goals in just 11 minutes against Argentina in a match that would finish 4-3. Two days later, Belgium snatched injury-time triumph from a disastrous two-goal deficit after finally waking up in the last 25 minutes against Japan to win 3-2.

Should either France or Belgium go on to win the tournament, it is those encounters that will go down in folklore as the crucial moment that a collection of enormously talented individuals turned into a cohesive world-beating team; the moment they were shocked awake, thought “no, we are better than this”, and vowed to turn mistakes into vital experience by learning from them.

Belgium have been the greatest entertainers of all at a World Cup that has so rarely dipped below fevered frenzy, but after Martinez’s long-beloved 3-4-3 came so close to spelling elimination at the hands of Japan, the Spaniard opted to switch to a 4-3-3 against Brazil.

It worked: the change allowed Belgium to reinforce the fine silk of Eden Hazard, Kevin De Bruyne and Romelu Lukaku with the raw steel of Nacer Chadli and Marouane Fellaini, who were rewarded with the place in the starting line-up after turning the Japan game on its head after coming in in a double substitution and both scoring. Repeat that Brazil performance to claim victory tonight, and credit will need to go to the much-maligned Martinez for finding a way to make it work and avoiding Belgium’s Golden Generation from befalling the same fate as the identically-dubbed England side of last decade.

Likewise, should France earn a place in their second successive major tournament final, their manager may be owed a few apologies from his long-standing doubters. Given how closely these two sides mirror one another, it is utterly unsurprising Deschamps has reached similar conclusions to Martinez on how to overcome the tyranny of choice.

After using the group stage to dabble with both formations and personnel, Deschamps has seemingly settled on what is often described as a 4-4-1-1 or 4-2-3-1 but is in fact neither. Blaise Matuidi – who was suspended in the quarter-final against Uruguay but available again tonight – is nominally the left-winger, but in practice plays as third central midfielder alongside N’Golo Kante and Paul Pogba, allowing right-winger Mbappe to join Antoine Griezmann and Olivier Giroud in attack with much greater regularity and potency. This effectively makes it a lopsided 4-3-3 (a formation with decent pedigree in this competition: it’s how Brazil won the World Cup in 1962) that has been Deschamps’ best attempt yet at getting the most out of his side.

It is possible that neither France nor Belgium are destined for greatness this year, and the fates have already decided in England or Croatia’s favour, in which case both sides – and the two managers – will likely forever remain the nearly men, the underperformers who had all the tools but never quite cracked it. But time may also prove that this game represents the penultimate and most challenging step in achieving redemption, fulfilling potential, and creating a legacy that will last for generations.

But most excitingly, as we near the end of the end of a chaotic, magical summer of football, this is the most unpredictable game yet – and the one with the most potential to enthral.