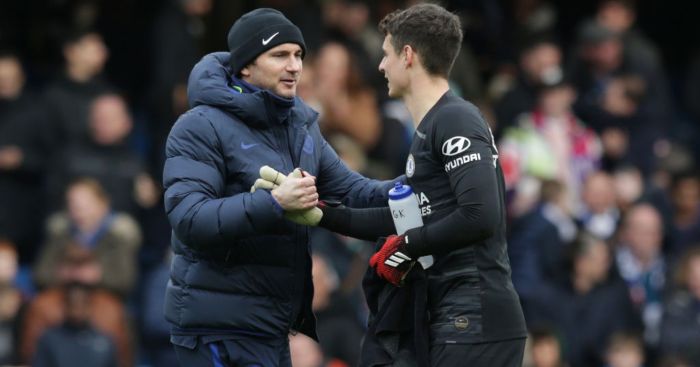 Frank Lampard has explained exactly what he wants from a goalkeeper and hopes Kepa can step up to the challenge at Chelsea.

Kepa came under fierce criticism from some fans and pundits after he was blamed for a couple of Sheffield United’s goals in the Blues’ 3-0 loss at Bramall Lane earlier this month.

The Spain international was dropped midway through the season after a number of costly mistakes, with Willy Caballero – who started Chelsea’s last match against Man Utd in the FA Cup semi-final – filling in.

Kepa showed an upturn in form on his return to the team before the Premier League was halted, but since the restart his form seems to have dipped again.

When asked what he wants from a keeper, Lampard told reporters: “What do I value in a goalkeeper? I think clearly you want them to be able to be as talented to keep balls out of the net, it’s old school but obviously the first and foremost job of what a goalkeeper keeps close to their heart, the idea of clean sheets.

“It’s not always solely on them, of course. For a keeper to have a real desire and talent to produce that. But in the modern day they are even more involved in the play than ever, to use their feet to be a personality, to be an all-round goalkeeper which you see with top level goalkeepers in the world.

“We are fortunate at Chelsea where we can certainly say goalkeepers were part of huge eras at the club.

“That has to be Kepa’s desire to be that person for this club and be goalkeeper in his own right and he can say he is a huge part of a successful team. It’s not just on Kepa that. But in his own way that’s what he has to believe and work towards.”