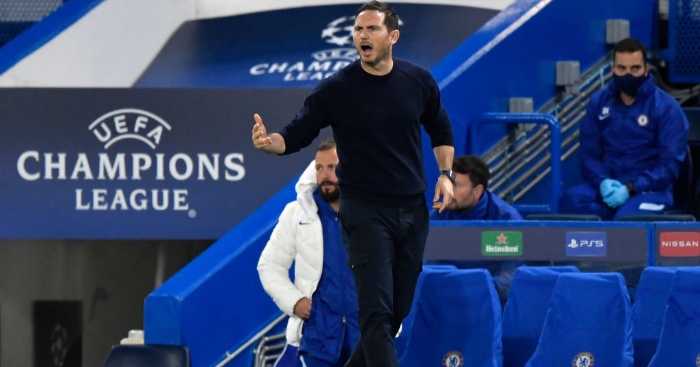 Chelsea manager Frank Lampard seems to be content with gaining a point after his team failed to score at home against Sevilla in the Champions League.

The Blues had moments of exciting play but were unable to break the deadlock in a tense night at Stamford Bridge.

Defender Kurt Zouma came closest to scoring with a header that was ultimately deflected and missed the target.

Speaking about the match, Lampard told BT Sport (via BBC Sport): “It feels good to get the clean sheet, it’s something you always strive for. Thiago Silva was excellent, he has experience and quality. Edouard Mendy had one save to make and he made a good save, he was good with his feet. Against a good team, it was a very organised performance from us.

“Sevilla pose a lot of threat – the crosses and balls into the box, they played really well and they’ve got quality. We had a few moments in the game, it was cagey and the two teams seemed to be cancelling each other out in the first half which was understandable. We take the point and move on.

“Both teams seemed happy with the point I think. We conceded a goal in the last minute the other day so when you have that feeling fresh in your mind it’s not nice. So this game will give us confidence but we haven’t had the personnel in training regularly and the more we have that the better we will get.

“When you play in the Champions League sometimes you rely on a moment but for us tonight it didn’t quite come. The last bit wasn’t there today, but we can’t complain, we’ve scored a lot of goals in the Premier League so far so we have to be happy with the clean sheet.

“We have to build, it’s a long season and we’re in the early stage of it – it’s a good start in a difficult group.”

Chelsea play Man Utd at Old Trafford in their next Premier League fixture.