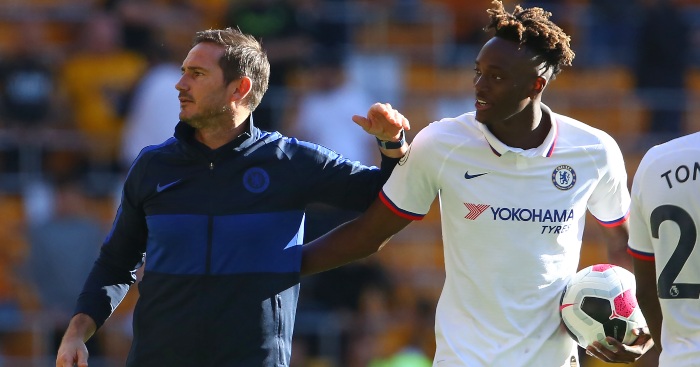 Chelsea boss Frank Lampard said that he was “delighted” with the display of his young stars as they helped Chelsea to a 5-2 win over Wolves on Saturday, picking out Fikayo Tomori for special praise.

The Blues took half an hour to break the deadlock through Tomori’s stunner but then raced into a 3-0 lead before the break, with Tammy Abraham’s hat-trick rounding off a fantastic afternoon for the club.

Speaking to reporters after the match, Lampard said he is proud of his youngsters coming into the squad and taking their chances.

“Very happy, I think we have had some performances where we have not got results we have wanted but to come to Wolves and win well is important. We need to continue now,” the manager said.

“[I’m] delighted for them all but particularly for Fikayo Tomori. He has worked so hard from where he started to now it’s superb. Also Tammy Abraham and Mason Mount – we are trying to give chances to the youngsters and they are scoring, taking their chances and showing us why we should keep putting them in the team.

“They deserve it, they have the quality but they also have a love for the club because they have come through the ranks. It’s not just the youngsters though – players like Willian are having fantastic performances that are just as key.”

Chelsea will look to build on their performance when they host Valencia in the Champions League on Tuesday.