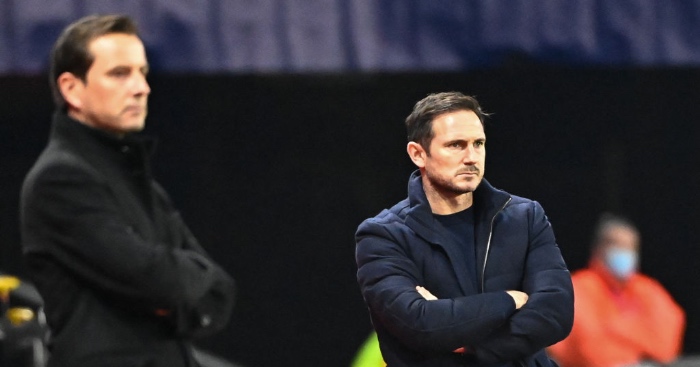 Chelsea boss Frank Lampard revealed he was ‘happy to qualify with games to spare’ as his side beat Rennes in the Champions League.

The Blues ensured their progress to the next stage of the Champions League with a 2-1 win, although it wasn’t always guaranteed.

Callum Hudson-Odoi scored in the 22nd-minute to put Lampard’s side ahead.

MAILBOX: The Muzzy Izzet stat that proves De Bruyne is nothing special

He received a brilliant through ball from compatriot Mason Mount and then slotted the ball into the bottom corner.

They led until the 85th-minute when Serhou Guirassy headed home from a corner. That put a Chelsea win in doubt until Olivier Giroud popped up to score the winner in stoppage time.

Timo Werner’s shot was saved by the Rennes keeper to put the ball high in the air. Giroud reached the header with a massive leap to send the ball looping into the net.

Speaking after the victory, Lampard said: “I’m very happy to qualify with two games to spare. It was a really tough match, they’re a very good team. Their recent form doesn’t reflect how good they are, it was a tough hard-fought win.”

When asked about Giroud, the Englishman said: “He does things like he does tonight, he’s great. It wasn’t just his goal when he came on but his hold up play and physicality.

“I have a problem because Tammy [Abraham] is playing well and Olivier in the restart was incredible. I have two players fighting for the position, but it’s a good problem. He’ll get his minutes because of the amount of games, you saw the reaction to his goal, and that wasn’t just because it was a late winner, it shows what he does day to day and what he means to the team.”

Lampard will now be looking ahead to the weekend when Chelsea face Tottenham. Lampard said about this: “We have to prioritise the game in front of us but we’re aware of where we are in the league and that Sunday is a big game.

“It always will be because of the rivalry and they are a great team and now it’s just about preparing well. They’ll have a day off tomorrow and then come Thursday morning we’ll start thinking about Spurs properly.”