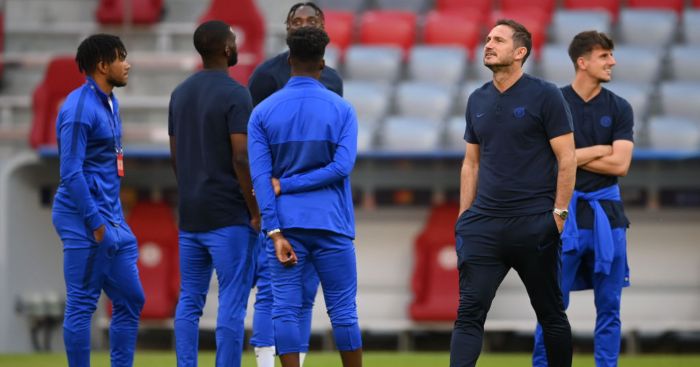 Robert Lewandowski struck his 52nd and 53rd goals of a stunning season and laid on two more as Bayern saw off Chelsea 4-1 to reach the Champions League quarter-finals.

The German outfit flexed their muscles as one of the tournament favourites once again, securing a 7-1 aggregate victory over Chelsea in the last-16 tie.

Peerless Poland striker Lewandowski converted a penalty and thumped home a header, while also teeing up Ivan Perisic and Corentin Tolisso as the Bavarians cruised past the Blues at the Allianz Arena.

Tammy Abraham tapped in his 18th goal of the season amid a promising showing from Callum Hudson-Odoi, with the teenage England winger laying on an assist and seeing a fine 20-yard strike ruled out for offside.

However, it was James who Lampard picked out for special praise during the loss in Munich.

“I want to focus on the resilience and the performance levels of a lot of players in the team,” Lampard told journalists.

“I think it was a good exercise for us today to look at a team like Bayern Munich and the Champions League experience they have in their ranks. Hundreds of appearances through their team and we had young players, debut seasons.

“Reece James going toe-to-toe with top players with an incredible individual performance, and some others within that. And I can see where I want us to go, for the good and the bad.”

When asked if the players will have learnt from the experience, Lampard replied: “Yeah without a doubt. A game against this high-level opponent is going to stretch you and strain you and it will be an experience for Reece and Callum and Tammy and Mason.

“But what I saw was young players there staying in the game, showing their qualities, fighting until the end. ‘N’Golo Kante, who has played 50% of our games this year – we’ve missed him badly – and then showing why he is the player that he is, with his level of performance during the game particularly the second half.

“So the result isn’t nice. Probably most people expected us to lose anyway, but we went in with the absolute right intentions and we competed against them.

“I’m never going to be happy with a defeat, but when you match up the two teams and I think about where we want to get to, it will take time. It’s not overnight. We know the position we’re in. So we take a rest which the players richly deserve and we look forward and we want to improve.”