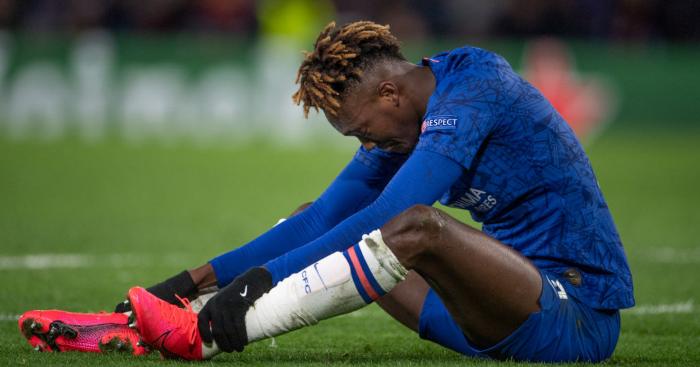 Chelsea boss Frank Lampard insists he has no major worries over the troublesome injuries affecting Tammy Abraham and Christian Pulisic.

Lampard has revealed Abraham was “relatively positive” after jetting to Barcelona for a second opinion on his ankle problem.

But the Blues manager remains unable to provide a clear return date for either England hitman Abraham, or USA forward Pulisic, who has not played since New Year’s Day due to an adductor problem.

Asked if he has any idea when Abraham will be back in action, Lampard said: “No. He went to Barcelona to get another set of eyes on it, and has come back relatively positive.

“Unfortunately he’s unwell at the moment, he’s off for a couple of days with a bit of a bug, so there’s no further update on the injury.”

With Pulisic’s injury proving just as tricky as Abraham’s, Lampard admitted both attacking stars are itching to get back into action.

“It’s certainly frustrating for them, particularly Christian who has had a big phase out now and is desperate to get back,” said Lampard.

“But (it is) only the concern I have every week when they are not fit, it’s no greater than that. I’m hoping when I’m not giving an answer it’s not like I’m looking into the distance and I can’t see the answer.

“I’m hoping they might be fit over the next week or two, I just can’t say that with clarity because they’ve both had their issues. It’s a difficult one and my concern remains the same as always with any injury.”

Chelsea host Liverpool in FA Cup fifth-round action on Tuesday night, with defender Andreas Christensen likely to miss out due to a knock.

Spain goalkeeper Kepa Arrizabalaga has fallen out of favour in recent weeks, but Lampard admitted he could start against the Reds.

“He’s been professional as expected, he’s trained well, kept his head down, supported the team, and the group,” Lampard said of Kepa.

“Every player is in control of their destiny in how they train and how they play.

“This is Chelsea and we’re trying to close the gap to the top, so there can be no one who is relaxed or loose, we have to push every day.

“Of course we have to look at the group in the summer. But there are no decisions beyond the game tomorrow night as far as I’m concerned.”