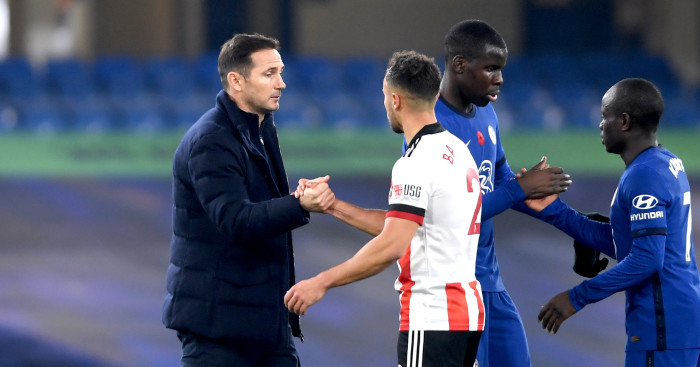 Frank Lampard has warned his Chelsea players not to get carried away by climbing to third in the Premier League and stretching their unbeaten streak to 11 games.

Chelsea thrashed Sheffield United 4-1 at Stamford Bridge to push within one point of the top of the league, with Tammy Abraham, Ben Chilwell, Thiago Silva and Timo Werner all on target.

David McGoldrick flicked the Blades into an early lead but Lampard’s new-look Chelsea are building their resolve – and hit back in style to thump Chris Wilder’s side.

Lampard’s men have only lost once this term, with the £220million summer recruitment drive starting to bear fruit – but the Blues boss has told his squad not to think they have cracked the Premier League code.

Lampard insisted Chelsea are yet to close the gap on recent Premier League powerhouses Liverpool and Manchester City, and will keep reiterating that to his players.

“That was our best performance of the season so far for sure,” said Lampard.

“We’re in a good place, but the level of Liverpool and Manchester City means you have to be in that good place every week.

“That’s the gap we have to close so I won’t get carried away with that.”

An impressive display sends Chelsea up to third 🔵#CHESHU pic.twitter.com/8AgF4mqff8

At 36 the centre-back appears as fresh as ever and in top form, leaving Lampard greatly impressed by his immediate impact at Stamford Bridge.

“I knew the player he was when he came here, because of the career he’s had,” said Lampard.

“It’s his level of performance since he’s been here; his influence on the group, his persona, his preparation between games, how he attacks training, how diligently he looks at opposition.

“He’s been brilliant, I can’t say enough about him today.

“He’s had a big influence in the short time he’s been here.

“The way he manages himself in between games, I’m very open to making sure we keep him as fresh as possible.

“He is fit, he’s fresh and it’s rubbing off on others around him.”