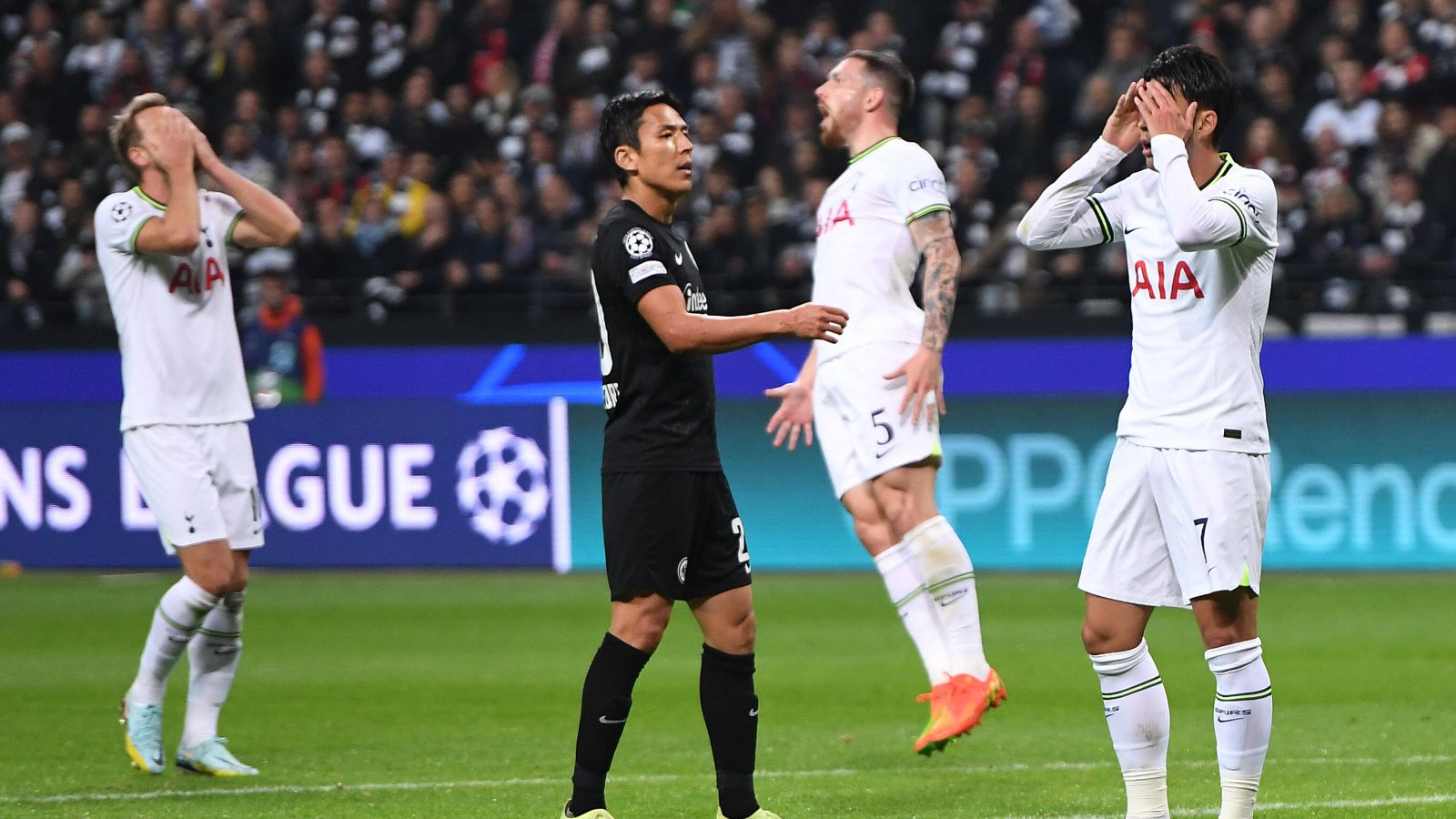 Tottenham Hotspur were made to settle for a point as they did not do enough to beat their Champions League Group D rivals Eintracht Frankfurt.

Spurs put in an improved display after their North London derby loss to Arsenal over the weekend but they lacked quality in the final third.

Harry Kane and Son Heung-Min spurned chances but Tottenham are still well-positioned to qualify for the knockout stages.

Conte went with the same XI that lost last weekend’s north London derby and Emerson Royal, who was sent off at the Emirates, looked determined to make amends with an early effort off target.

A free-kick won by the Brazilian evaded both Cristian Romero and Kane soon after before the hosts enjoyed their best period of the first half.

Three corners were won in quick succession by Frankfurt, the first after captain Sebastian Rode had seen his shot from inside the area deflected wide by Ivan Perisic, but Spurs stood firm and should have gone ahead in the 25th minute.

The visitors’ attacking trio linked up brilliantly with Son receiving a pass from Richarlison, after an intelligent dummy, but his ball across the face of goal had too much pace and Kane could not convert.

Son and Kane were beginning to get in the mood and they combined again with the latter firing wide from 22 yards after an excellent turn.

It was Son who threatened next just before half time, following Kane’s superb flick-on, but the South Korean bent this shot wide.

Tottenham were well on top and yet it stayed goalless at the break after Perisic saw an effort deflected behind by Kristijan Jakic following Emerson’s cutback.

Both sides pressed for the breakthrough at the start of the second period and the Group D tie became end-to-end.

Frankfurt who created the first opportunity after the restart when Djibril Sow brilliantly chipped into the path of Ansgar Knauff but the wing-back saw his weak volley on the turn go straight at Hugo Lloris.

Conte’s side immediately responded with Son playing in the overlapping Perisic but his cutback for Kane was thwarted by Evan Ndicka’s sliding tackle.

Although Kane limped away after a bang to the knee, he did continue and Son wasted another fine opening in the 54th minute when he curled over.

Six minutes later and Frankfurt almost hit Tottenham with a sucker punch when Rode won back possession after a Romero mistake but Jesper Lindstrom curled over from inside the area.

The intensity of the second half slowed after and Conte turned to his bench with 19 minutes left when Ryan Sessegnon was introduced and Ben Davies and Bryan Gil soon joined him on the pitch as the seconds ticked away.

Spurs survived penalty appeals from the hosts moments after their double substitution when Knauff’s shot was blocked by Pierre-Emile Hojbjerg’s hand but referee Daniele Orsato was happy to let play carry on.

Frankfurt goalkeeper Kevin Trapp was finally tested for the first time in the 81st minute but Kane’s half-volley was easy and despite three minutes of stoppage time in Germany, Tottenham had to settle for a point which keeps them second in the group.

READ MORE: The top 20 biggest transfers in Europe in the 2022 summer transfer window