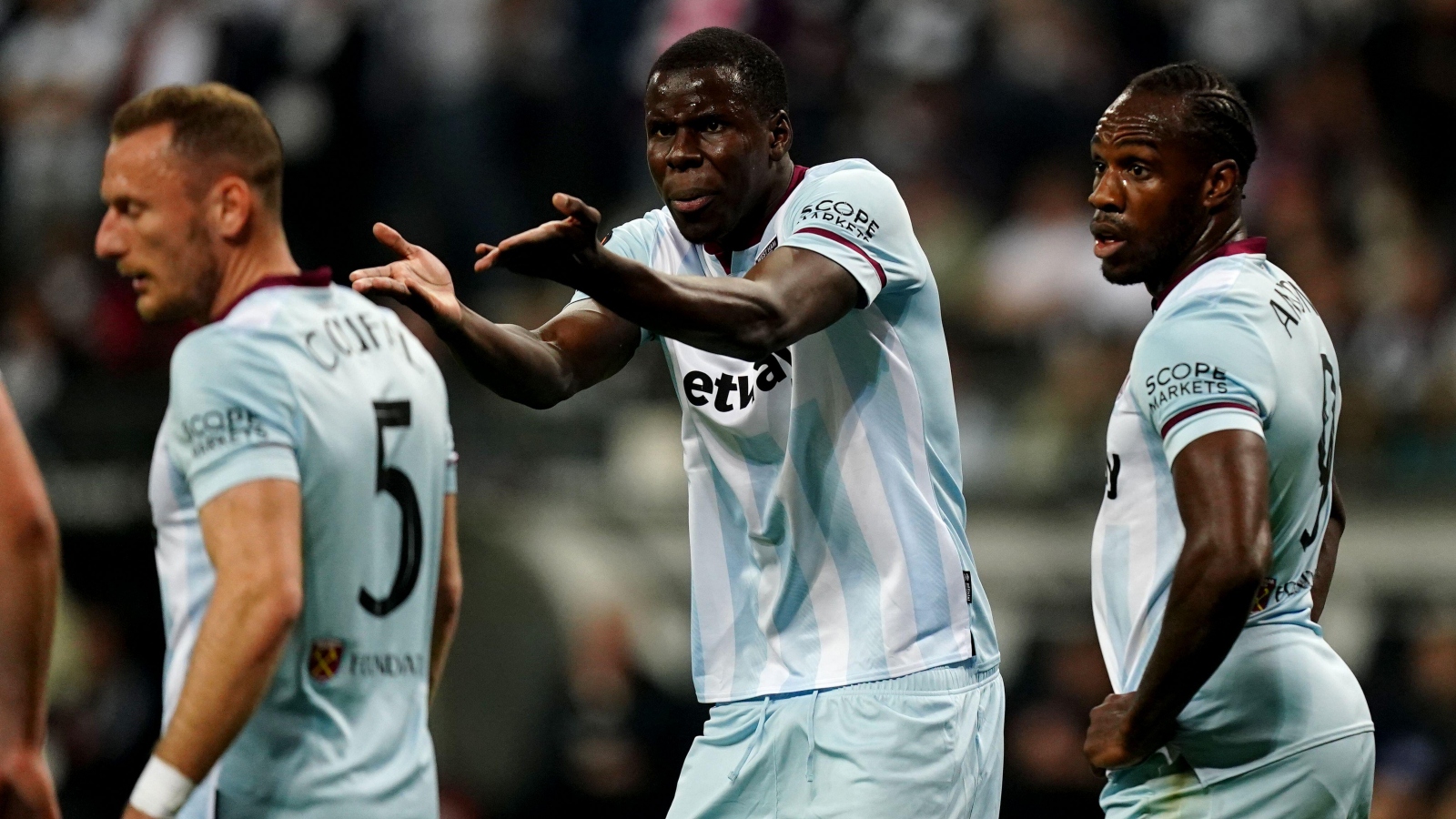 West Ham suffered an acrimonious 1-0 defeat away to Eintracht Frankfurt to end their Europa League dream.

Full-back Aaron Cresswell was sent off in the first half to leave the Hammers facing an uphill battle, and manager David Moyes was also ordered from the touchline late on after angrily kicking a ball back towards a ball kid.

It was a sad end to an uplifting run to the last four of the Europa League, with West Ham beating sides from Croatia, Belgium, Austria, Spain and France to reach a first European semi-final since 1976.

But, trailing 2-1 from the first leg, against the same opposition that West Ham overturned the same deficit against on that famous night 46 years ago, Moyes’ side were unable to emulate Trevor Brooking, Billy Bonds et al by going on to reach the final.

Instead a 3-1 aggregate defeat put paid to their chance of a place in the Champions League – the prize for the winners of the trophy – next season, and as a consequence puts the future of captain and prized asset Declan Rice, who continues to snub a new contract, in doubt.

West Ham had reason to believe they could turn the tie around as Eintracht have the third-worst home record in the Bundesliga this season, losing six and drawing six of their 16 matches.

But on the flip side they have been unbeaten in Europe this season and drew 1-1 in each of their previous home legs with Real Betis and Barcelona.

Eintracht had taken an early lead at the London Stadium a week ago, but this time they suffered an early injury blow when defender Martin Hinteregger limped off after an ill-advised body check on Hammers bulldozer Michail Antonio.

It looked like it could be West Ham’s night as, by contrast, they had started well and looked in control of proceedings despite the hostile atmosphere inside the imposing Deutsche Bank Park.

But they were hit by a huge setback after 19 minutes when Cresswell was given the slip by Jens Hauge and clumsily brought the Eintracht forward down.

Spanish referee Jesus Gil Manzano initially showed the full-back a yellow card, but after consulting the pitchside monitor he condemned Cresswell, sent off in the previous round against Lyon, to his second harsh but avoidable dismissal of the competition.

West Ham escaped immediate further punishment when Filip Kostic fired the free-kick inches wide, but three minutes and a defensive reshuffle later they were a goal down on the night and two behind on aggregate.

The goal came from Cresswell’s flank on the West Ham left, now occupied by substitute Ben Johnson who had come on for the unlucky Manuel Lanzini.

The West Ham defence was pulled horribly out of shape as Ansgar Knauff had the time and space to roll a low cross for Rafael Santos Borre to convert unchallenged from eight yards out.

The 10 men withstood the inevitable barrage for the rest of the first half, and yet almost grabbed a shock equaliser on the stroke of half-time when Antonio’s far-post attempt was blocked on the line.

From Zagreb to Frankfurt.
Those special nights at London Stadium.
Beating six-time champions Sevilla at our place.
Lyon away. What a night that was.
Our European journey is over, but we hope we made you proud.
Come On You Irons.❤️⚒

The build-up to the match had been marred by arrests around the city for scuffles between fans, and it ended in near bedlam with thousands of Eintracht fans streaming onto the pitch with flares at the final whistle, before riot police and dogs restored some semblance of order.

Nevertheless it has been a memorable, exhilarating ride for a club more used to relegation battles in recent years.

The challenge for Moyes now is to pick his tiring team up for the final three Premier League games and make sure they qualify again.