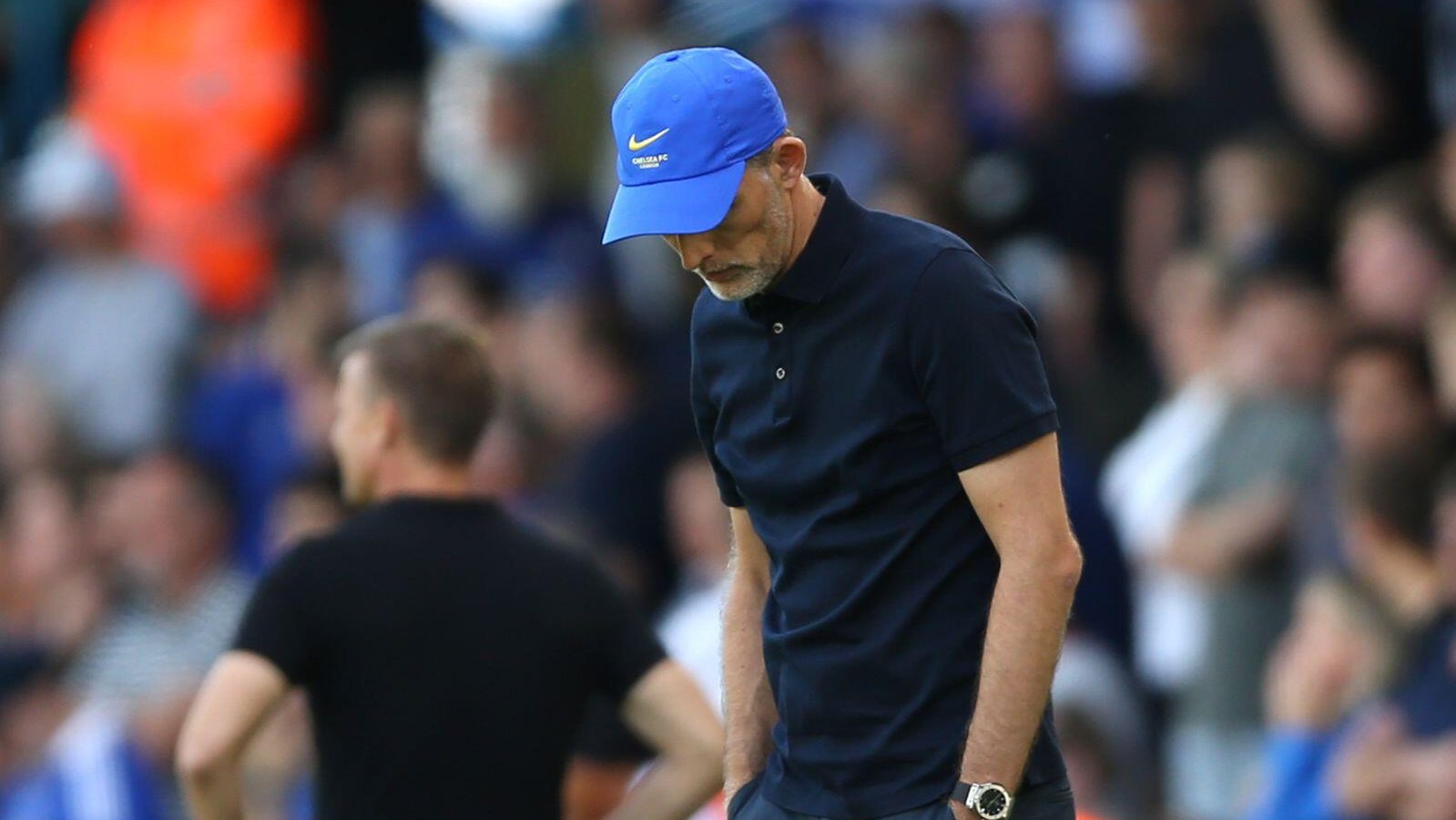 Chelsea losing to Leeds was all of the fun but the happiest in all the land are Arsenal fans. The Mailbox is a belter.

Here we go…
And cue a f*ck-ton of chat about how the quality in the Premier League is so high that there are no easy f**king blah blah blah.
Finlay x

…Now can everyone see that Tuchel is a fraud?
Greg, CFC (Herts) (do we still do this sort of thing)

What does a Havertz do?
Firstly well done Leeds! All the things Chelsea are good at, Leeds stopped them and showed what they could do. Incredible energy that the crowd certainly helped.

Secondly, what does Kai Havertz do? (Taking scoring in finals out of the equation). He isn’t a 9 or 11 (or false 9), as he doesn’t score anywhere near enough or assist anywhere near enough. He doesn’t even assist the assister. He isn’t a winger. He isn’t a central midfielder. Is he a no 10? Again goals and assists point otherwise. I genuinely couldn’t tell you his best position, there’s not enough evidence to show he’s actually worth a place in the first 11.
Will ( please just play Broja up top) CFC

Marsching on together
Out by November they said.
Dale (We’re going on a European tour) Leeds

A new derby
Surely the matches between Manchester City and Newcastle from now on should be dubbed El Washico?
Håkon, Oslo

That’s what Newcastle fans were craving
Wow… well that was emotionally exhausting. What a performance from the lads. When NUFC were told we should be happy with what we had with Ashley, relentless mediocrity as we battled for the 17th placed trophy with long ball Bruce, this is all we wanted. Whatever happens this season it’s great to have a team we can be proud of again (Saudi money not withstanding) and bringing back joy to so many Geordies. Cannot wait to see a few more of ‘those’ games this season. HWTL.
Tarqs, Woolwich (NUFC)

Stevie G for Goner
Steven Gerrard is an absolute fraud of a manager and the sooner the media start commenting on this the better.

Bar the 5 game new manager bounce when he took over from Smith, he has been utterly atrocious. Has been given top class players and doesn’t have a notion of his best 11, his best formation, his best way to manage existing players, anything.

Media think that because he gets out every week and throws his players under the bus that he is some God, really need to cop the f on. He is a fraud, an expensive fraud.

Liverpool fans, hate to break it to you, he won’t end up being  your manager. Steven Gerrard, Liverpool FC club ambassador in 5 years and BT commentator. Heard it here first.
Paul

Arsenal and loving it
Thank you sincerely for publishing the ‘Arsenal Invincibles Mk II’ article.

We don’t know how long this form will last; we know we’ve ‘only’ played Palace, Leicester and Bournemouth; we doubt very much we’ll be top of the pile by the end of May.

None of it matters. Football is for enjoying and we’re having a f**king good time right now.

We didn’t need more than the three points to keep that feeling going this weekend, but F365 gave it to us anyway: a whole comments section full of salty desperation. Delicious.
Dane, In the North Bank (Saliba!)

Arsenal hot take
Hot Take: Arsenal…..not that bad. Should avoid relegation. Could match last year by finishing 6th or even surpass it by finishing 4th. It’s almost as if Mikel Arteta had a process he wanted to implement all along. Patience is a virtue. If only more owners showed this in their choice of managers.
Ash, London

Why are Arsenal fans the worst online fans?
Who knows? What I do know is that Spurs under Nuno won 3 of their first 3 matches last year, which included a victory over Man City. Arsenal have won 3 games over a Palace side which had basically never trained together before, a Leicester team who haven’t signed any outfield players and a Bournemouth team who are favourites to go down and now they think they will win the league. Cannot wait for them to crumble when they start playing Thursday nights.
Chris, London

…Arsenal have started the season in sweltering form. That’s undeniable. They have clearly made huge progress under Arteta but are we really talking Mark II Invincibles after 3 routine wins against Palace (Midtable) and Bournemouth/Leicester (both going to be in the mix for relegation).

I don’t think Arsenal can be fully judged until they come through the run of fixtures Oct 1st to Nov 5th when they start with Tottenham, finish with Chelsea, and play Liverpool and City in between.
Edward Canhands (The table means nothing until 10 games in – Last Sataurday Sunderland went from 1st to 5th in the space of 3 minutes plus stoppage time)

Fulham vs Brentford was amazing.

HARRY KANE
This has been on my mind for some time. It grates me, it infuriates me. I would punch a puppy in the face for it to stop.

VAR? No.
Kicking off about ref decisions? No.
Qatar fucking everything up? No.

Or should I say, “HARRY KANE”

No other player constantly and persistently has their full name announced at every goal, assist, touch, foul, or otherwise.

I am surprised I have yet to hear his middle name, too. It is goddamn annoying. No other player is constantly called by their full name (minus ‘Edward’).

Why do they do this? Why am I so annoyed by this? Fucking hate it.
Mike D (sorry for the fucking swearing but it is fucking infuriating)

Back to Casemiro…
I’m sure I won’t be alone saying this, but the salty faces of many Liverpool fans writing in to Saturday’s mailbox are very pleasing to see.

Apparently £60m is too much to waste on:

– someone who has won everything more than once
– who is old (have you seen the Liverpool midfield? I guess signing a 29 year old is very different)
– someone slow (ah yes, Fabinho is such a pace merchant – we all know positioning and timing is far more important)
– someone who is used to playing with better players (this I’ll grant, Modric formerly of Spurs is definitely far better than Eriksen formerly of Spurs who replaced him – while Kroos is a far more dynamic player than Bruno, maybe).
– someone who is too different from De Jong (except that they both break up play and trigger attacks, I’ll grant that De Jong will drive forwards too, but Casemiro does that too just less often because he has the aforementioned Kroos and Modric next to him)
– someone who wasn’t wanted by his club (except that his current manager has stated otherwise).

Basically, it seems people are quite rattled that we’ve signed the lad, so that can only be good. I’ll admit that it came from left field, but then he wasn’t known to be available earlier.

Now we just need to finish landing Milinkovic-Savic, Antony and Dest and we can call that a good window all in.
Badwolf

Utd haven’t had a truly world class central midfielder in his prime in our side since the early to mid 00s when Keane and Scholes were on their pomp. Our great sides from 07 onwards got by with a combination of the dependable Carrick and a mixture of grafters and oldies like Scholes chipping in. Now we’ve signed the world’s best defensive midfielder, a five times champions League winner who provided the base for one of the sport’s legendary midfields.

As for his age, he has a good five years at his absolute best left in him. That’s a long time in football, an entire era. Make no mistake, this signing is a massive coup and the club deserves huge credit for pulling it off.

Was it worth waiting almost the entire transfer window to end up with a midfielder of Casemiro’s calibre? You can bet your bottom dollar it was.
Super Sancho

…I’m a self confessed ABU and loving all things UTD at the moment obviously.

However, with all of the comments about Casemiro being risky business at 30, it reminded me of another DM from Real Madrid who parked up at Stamford Bridge nearly 20 years ago, Claude Makelele.

Didn’t work out too bad that one, if I remember correctly.

Plus player fitness is way ahead of 2003, so I can’t see age being the issue… Now poor attitude, work rate plus the Hex that seems to befall all good footballers as soon as they sign for the Red Devils, that could be a problem.

…As I read Gronk (LFC)’s analysis of United playing Supermarket Sweep, I couldn’t help but think he was attempting classic mind games before Mondays relegation 6 pointer. United fans will rise above it.
Noel, Dublin

Call my agent
Just wanted to point out everyone that ten hags agent also represents the below players:

The last time a manager’s agent was representing most of a manager’s signings was Mark Hughes at QPR and we know how that went.

Just saying that football really does end up in the sewer sometimes.
James Roberts