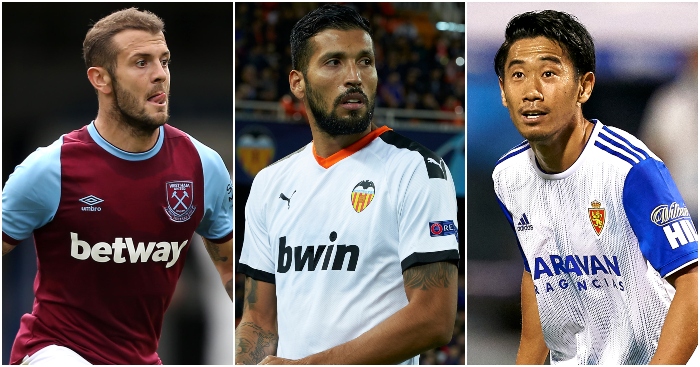 The transfer window may have closed but this free agents crew are still available for any clubs who did not manage to get all their shopping done before the deadline. Of which there are many…

Orjan Nyland is looking for a new club after Aston Villa agreed to release him from his contract a year early having slipped down the pecking order at Villa Park behind Emiliano Martinez and Tom Heaton. But 35-year-old Subasic takes the gloves on account of his CV. The former Croatia keeper, who played in the 2018 World Cup final, left Monaco in July after eight years in the principality. There he won Ligue 2 and Ligue 1 while also reaching the Champions League semi-finals in 2017/18. Might be perfect for any club looking for experienced back-up, like Liverpool.

Any club looking to make Clyne an offer best get in there quickly because it seems Crystal Palace are preparing terms for the former England right-back. Clyne has been training with Palace over the last fortnight and with Nathan Ferguson going through ‘the slow process’ of recovering from knee surgery, it appears the former Liverpool defender has done enough to prove he can still do a job in the Premier League. Should Clyne be rendered ineligible for this XI, then another ex-Liverpool full-back Jon Flanagan could step in after he was released by Rangers.

The Argentina defender is a free agent and Manchester United could do with a centre-back. After all the years of being perennially linked with the Red Devils, could it finally happen? Probably not, but the 33-year-old could make a decent freebie for someone, especially as a left-sided central defender. Garay has not played since February, when he sustained a cruciate knee ligament injury, but that hasn’t stopped Everton, Benfica and Real Sociedad being linked with the former Real Madrid star. A reunion with Jose, perhaps?

The 25-year-old is a free agent after Celtic opted not to take up the option of another year on his contract. Simunovic struggled with injuries at Parkhead but when he was fit, both Brendan Rodgers and Neil Lennon trusted the former Croatia Under-21 international. But the reason he makes this XI over Adrian Mariappa and Daniel Schwaab is just to give us an excuse to see this tackle again…

The former Manchester City left-back is presumably short of offers since he has been spotted training with French fifth-tier side Thonan Evian. But 45 appearances for Turkish champions Istanbul Basaksehir last season suggest Clichy isn’t finished yet, despite having turned 35 in July. Likewise, Charlie Daniels, 33, is trying to prove he is worthy of a contract while training with Bournemouth as he continues his recovery from a serious knee injury.

West Ham and Wilshere parted ways earlier this week after agreeing to termination of their contract. For £100,000 a week, the Hammers got only 16 Premier League appearances from the 28-year-old, though there will be plenty of managers tempted to take a punt on the ex-England star. Steven Gerrard is said to be one…

Speaking of gifted midfielders who can’t seem to stay fit, Defour is a free agent after leaving Royal Antwerp. The former Belgium international, perhaps most famous for being the recipient of a letter from Sir Alex Ferguson, showed some of his talent at Burnley, where he enjoyed his time under Sean Dyche. But the 32-year-old is now training with Mechelen after a move to Turkey failed to materialise.

There will be a coach somewhere in Europe who fancies himself as the man to tease the talent out of the one-time ‘Croatian Lionel Messi’. Halilovic shared a dressing room with the actual Messi but he managed only one first-team appearance at Barcelona after moving to the Nou Camp aged 17 from Dinamo Zagreb. Since that solitary game for Barca, Halilovic has had spells at Sporting Gijon, Hamburg, Las Palmas, AC Milan, Standard Leige and Heerenveen. His contract at AC Milan was torn up by mutual consent earlier this week, leaving him free to tempt another club with a reputation forged as a teenager six years ago.

Shinji is free once more. Like Halilovic and Wilshere, Kagawa had a contract torn up this week with his agreement with Real Zaragoza being ended a year early. To be honest, Kagawa ever moving to Zaragoza had completely slipped our minds, which perhaps gives an insight into why the club are happy to get rid. Kagawa isn’t so chuffed with the way it has ended: “To be honest, it’s not what I wanted. I really regret having to leave unexpectedly.” Reports suggest he could stay in Spain with second-tier side Sabadell.

The 31-year-old has been training with eighth-tier outfit Kidsgrove Athletic after being released by Trabzonspor in March following his four-month ban for betting violations. But with that suspension now served, the ex-England striker is ready to return to complete some ‘unfinished business’ in the Premier League, according to the Daily Mail. Sheffield United, Crystal Palace and Aston Villa were all linked with Sturridge, who was seemingly everyone’s Plan B to Rhian Brewster.  The former Liverpool striker scored seven in 16 games for Trabzonspor so he hasn’t lost his eye for goal. If indeed there are any shreds of motivation left, Sturridge could be a gamble worth taking for someone.

After a brief stint in Dubai, the striker not long ago touted for Manchester United is back in Europe looking for a club and it seems he is not short of offers. Fenerbahce, Besiktas, Lokomotiv Moscow, Inter Milan, Benevento, Fioretina and Hellas Verona have all been linked with the 34-year-old former Bayern Munich and Juventus star. There have been whispers of interest from West Ham too, and it would hardly be surprising if Ed Woodward had thought about going there again in the last few weeks.