Home All The News Free agents XI: Out-of-contract stars yet to sign a deal 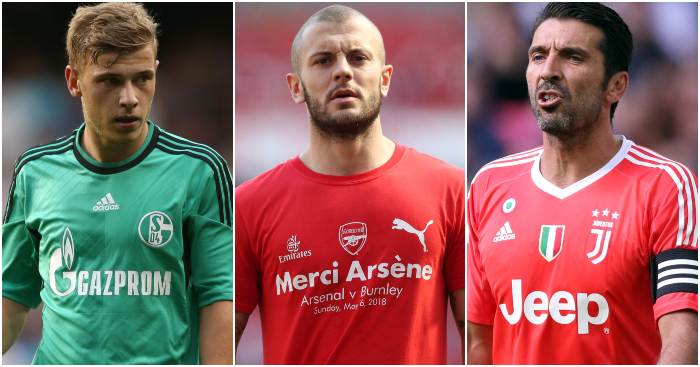 These players, in a 3-5-2 formation, are days away from free agency with no club yet acquired as pre-season training approaches…

GK: Gianluigi Buffon
The 40-year-old left Juventus after 17 years but the Italy legend wants to continue playing. Buffon was linked with Liverpool but seems most likely to join PSG, who will apparently give the keeper a two-year contract worth around £135,000 a week.

CB: Giorgio Chiellini
Like Buffon, Chiellini’s contract at Juventus also expires this summer but there is no genuine prospect of the centre-back leaving the Serie A champions. Juve have apparently tabled a two-year deal for the Italy veteran, who turns 34 before the start of the season and is expected to join the club’s board when he hangs up his boots.

CB: Holger Badstuber
The Germany defender, whose career has been ravaged by injury, fancies a big move this summer. The 29-year-old had a year at Stuttgart after being released by Bayern and he has been linked with Lazio. But Badstuber said earlier this month: “My aim is the Champions League, not the Europa League.” He also reiterated his desire for a full pre-season, so he would be wise to get a shift on.

CB: Diego Reyes
Lazio have also been sniffing around Mexico defender Reyes, who looks set to be leaving Porto. The 25-year-old had productive loan spells at Real Sociedad and Espanyol before flitting in and out of Porto’s XI last season. Reyes reportedly impressed enough to attract interest from Napoli and Inter too.

RWB: Glen Johnson
The ex-England defender leaves Stoke this summer but there’s hardly a queue of clubs looking to make the 33-year-old an offer. Crystal Palace have been linked, perhaps because half their squad seemingly are out of contract.

LWB: Bernard
Okay, the Brazilian is a left-sided winger – with 63 goals in 157 Shakhtar appearances who has apparently attracted interest from Arsenal, West Ham and Liverpool – but we’re down to the bare bones so the 25-year-old will do a job for us at wing-back.

CM: Jack Wilshere
The England midfielder is currently considering his options but it seems the 26-year-old doesn’t have as many as he might have hoped. West Ham have been heavily linked but the Hammers are reportedly only willing to offer a one-year deal with the option to extend. Which is still more than Juventus, who aren’t interested despite months of speculation that they were.

CM: Marouane Fellaini
In contrast to Wilshere, Fellaini seemingly has his pick of clubs. Manchester United still want to keep the Belgium star, who will make a decision on his future after the World Cup. The 30-year-old could replace Wilshere at Arsenal or he could take his brand of midfield dynamism to AC Milan.

AM: Max Meyer
The Germany midfielder, still only 22, has been linked with the Premier League seemingly since birth. Liverpool and Arsenal are reported to have tracked Meyer but now he is a free agent, it seems he has his heart set on AC Milan after rejecting the opportunity to stay in the Bundesliga with Hoffenheim.

FWD: Hatem Ben Arfa
The perennially-infuriating attacker isn’t short of options as the clock ticks down on his PSG contract. Just because he seems to have burned his bridges in the Premier League hasn’t put off Borussia Dortmund, Lyon, Rennes, Tigres, Rubin Kazan, Dynamo Kiev, Fenerbahce, Besiktas, Valencia, Villarreal and Sevilla…

FWD: Fernando Torres
After leaving Atletico Madrid, it seems the former Chelsea and Liverpool striker’s future has already been determined but he’s keeping it to himself for now. The 34-year-old has been linked with a move to Japan and his dad did little to quell those rumours when he said: “I am sure it won’t be in Europe, it will be a long way away.”