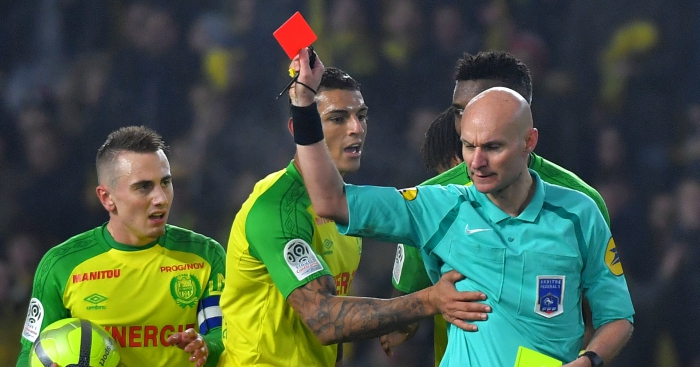 French referee Tony Chapron, who kicked out at and then sent off a Nantes player, has been banned for three months.

Chapron had been stood down from duty by the Ligue de Football Professionnel (LFP) following the incident in Paris St Germain’s 1-0 win over Nantes on January 14.

He had been knocked to the ground in an accidental collision with Diego Carlos before kicking out at the Nantes defender and showing him a second yellow card.

Chapron’s punishment was decided by the LFP disciplinary committee at a hearing on Thursday night.

“After hearing Mr Tony Chapron and reading the instructor’s report, the commission decided to suspend him for six months, three of which were suspended,” a post read on lfp.fr.

Chapron apologised the day after the incident and Carlos’ second yellow card was rescinded.

In case you somehow missed it last night, here's referee Tony Chapron kicking out at Diego Carlos and then sending the Nantes player off… 😳 pic.twitter.com/r8zXIk3dK2

On the night of the Ligue 1 fixture, Nantes president Waldemar Kita called for Chapron to be banned for six months.

“I got 20 text messages from all over the world telling me the referee was a joke,” Kita told L’Equipe.

“What do you want me to say? If I talk too much I will be called before the disciplinary commission. We don’t have the right to say anything.

“It’s scandalous to see that. He gives a red card to a player who did nothing. He needs to go back to school. It’s amateurish.

The French newspaper on Thursday reported that the official had announced weeks before the incident that he would retire at the end of the season.