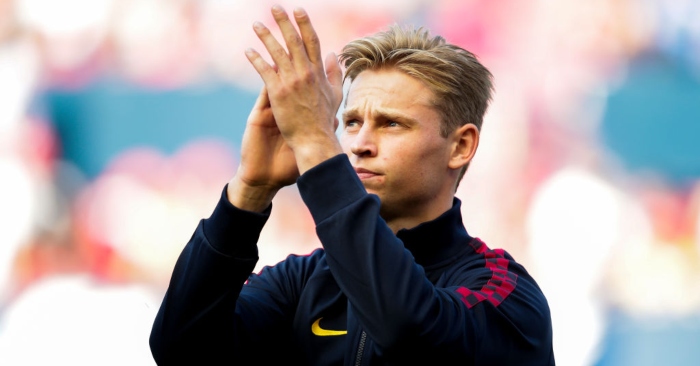 Frenkie de Jong has continued to rise over the past 12 months, and it is hard to see where his ascent will stop. A symbol of the Dutch national team’s bright future, the deep-lying central midfielder was handpicked by Barcelona as their long-term replacement for Sergio Busquets. He and close friend Mattijs De Ligt were the brightest stars as Ajax returned to the big stage with a bang last season, proving that the Amsterdam club are still at the forefront player development.

De Ligt’s future would drag out across the summer, but De Jong’s was decided before Ajax’s run to the Champions League finals, with his £75million switch to Camp Nou signed and announced in January.

It hasn’t all been plain sailing in La Liga for the 22-year-old. Barça have struggled in the early weeks of their title defence, losing to Athletic Club on opening night and drawing with newly-promoted Osasuna. The distraction of Neymar’s possible return haven’t helped, but perhaps a clash of generations, specifically involving de Jong and his soon-to-be predecessor, Busquets, is also having an impact.

De Jong may be the heir to Busquets’ throne and the links between Ajax and the Blaugrana should ease his transition over time, but he’s still having to bide his time.

After all, Ernesto Valverde still has Busquets available to him. The Spaniard is perhaps the most vital cog in the Barcelona machine. Even if his powers are wavering, which they undeniably have been for some time, it would be illogical for De Jong to take his place now, so Valverde has played the pair together. Unsurprisingly, it hasn’t quite worked for Barça.

Next to Busquets, De Jong is forced to hold onto the ball longer than he would like. Recycling possession and moving from side to side in his zone on the pitch is not enough. No club has ever defined the differences of midfield roles quiet like Barcelona, because the types of passes required by each of the three players in that area are different.

For Holland, as he showed both in the UEFA Nations League semi final against England over the summer and more recently in the 4-2 win over bitter rivals Germany last week, he dictates the tempo of the game impeccably, and that tempo is usually exceptionally quick. He proved too much for England to handle. For all the pace, dynamism and flair Gareth Southgate has up front, his side has too often been undone by an inability to control the midfield, which De Jong does with his eyes shut.

Another Frenkie masterclass with Netherlands. He scored his first goal with the team and many more to come! A midfielder that every team wishes to have, if only our coach knew how to use him properly. pic.twitter.com/NhVMtT8B3t

There has been a lot of talk about Barcelona’s identity crisis over the past few years. Since Guardiola walked away in 2012, and Xavi and Andres Iniesta, the linchpins of much of their success over the past 15 years or so, departed, they have lost something. When quality of that level disappears, any team are bound to struggle. Busquets has been forced to undertake a slightly different role to compensate, while Lionel Messi always finds a way to paper over any cracks too. In De Jong, though, they have a player who can and will preserve the philosophy of the club. Arthur, the Brazilian playmaker, is another nod to a future in safe hands.

Off the pitch, de Jong is showing the maturity needed to fulfil his immense potential. Barcelona have been scarred by the issues with Neymar, which were well documented, and more recently his replacement Ousmane Dembele. The Frenchman’s lack of professionalism, as well as injuries, has marred his time at the club and it now appears a lost cause; the sense of desperation in their bid to offer him to PSG in a bid to see Neymar return was highly descriptive.

By contrast, de Jong is quiet, unassuming and humble, with the right mentality to succeed. When he picked up his award as UEFA’s Midfielder of the Year for his exertions with Ajax, there was a sense of disbelief that he’d won it, but that shouldn’t be misjudged as a lack of confidence and self-assurance.

The biggest worry for Barcelona in the years to come will be what will happen when Messi retires. It is impossible to replace perhaps the greatest footballer ever, but that doesn’t need to lead to disaster. With La Masia’s production not even half as efficient as it was when the likes of Messi, Busquets, Xavi and Iniesta came through, Barcelona have had to find new ways of building for the next generation. Rather than buying players who feed the desire for instant gratification like Real Madrid, they are best served finding the right players to fit into their ideology.

In Frenkie de Jong, a player who has helped transform Ajax and Holland already, they have got one and if they are patient, they will reap the benefits for many years.