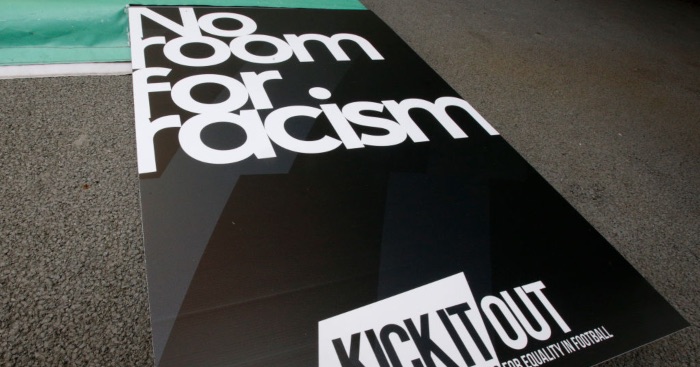 Haringey Borough manager Tom Loizou revealed he took the decision to pull his players off the pitch because they “looked frightened” as their FA Cup qualifying clash with Yeovil was abandoned over alleged racist abuse.

Loizou said defender Coby Rowe suffered racial abuse by a small minority of supporters while Cameroonian goalkeeper Douglas Pajetat was also spat at, prompting him to pull his players off after 64 minutes of the fourth-round qualifying tie.

The Football Association has already launched an investigation, saying it was “deeply concerned”, while Yeovil have said they will cooperate with the authorities, with the Metropolitan Police also looking into the allegations.

Loizou told Sky Sports News: “Early into the second half, we got a corner and a couple of the players said to me there was monkey chants.

“We got over that, we carried on playing. They got a penalty and my goalkeeper was spat at and had missiles thrown at him.

“The referee halted the game briefly, they scored the penalty, one of players went to pick the ball out of the back of the net and Coby Rowe was racially abused.

“We tried to calm the supporters down but more balls were thrown on to the pitch. The referee was a bit indecisive as to what to do.

“I looked at a couple of our players’ faces and I was distraught myself, just to see their faces. I gave it a couple of minutes and I went on the pitch and pulled my players off.

“There was no way that two or three of those players could have continued playing. What they heard was disgusting, they looked frightened.

“I can’t sit down and watch young players being abused by a minority.”

Rowe later took to Twitter to confirm he was targeted, posting: “Can’t believe I’m tweeting this and it’s 2019 but today I was a victim of racism, in what was supposed to be a great day for @HaringeyBoroFC. Another game of football ruined by racists.”

Can’t believe I’m tweeting this and it’s 2019 but today I was a victim of racism , in what was supposed to be a great day for @HaringeyBoroFC

another game of football ruined by racists.

Thanks to @YTFC players and staff who backed our decision to leave the pitch.@kickitout pic.twitter.com/yxijG1F194

The FA swiftly released a statement saying it was looking into the incident “as a matter of urgency”.

“We are deeply concerned about the allegation of discrimination from an area of the crowd towards a player during the FA Cup fourth round qualifying match between Haringey Borough and Yeovil Town, which resulted in the fixture being abandoned,” said the governing body.

“There is no room for discrimination in our game and we are working with the match officials and the relevant authorities, as a matter of urgency, to fully establish the facts and take the appropriate steps.”

The Met Police also issued a statement, saying: “Police are investigating reports of racist comments made during a match between Haringey Borough and Yeovil on Saturday, October 19.

“Officers are also investigating after items were reportedly thrown onto the playing area. No arrests; enquiries continue.”

Yeovil, who were leading 1-0 when the game was abandoned, said: “Yeovil will be cooperating with the authorities and our friends at Haringey Borough regarding events leading up to today’s fixture not being completed.

“We are aware that there are allegations that racist comments were made in the crowd and this allegation will be a key part of any investigation.

“Irrespective of the outcome of any investigations, we would like to make it clear that the club will not accept racism or discrimination in any form.

“The club will be making no further comment until the current investigations are completed.”

The football anti-discrimination charity Kick It Out praised the “swift and decisive action” taken by Loizou and his players, comparing their response to that of the England team in last week’s Euro 2020 qualifier in Bulgaria.

Kick It Out said in a statement: “The reports relating to events at Haringey Borough this afternoon, in the FA Cup tie with Yeovil, are of alleged racist abuse, and yet again means players are continuing to receive discriminatory abuse while doing their job.

“The Haringey manager and players took swift and decisive action as a result of the abuse, similar to that taken by the England team out in Bulgaria just five days ago.

“Kick It Out has informed the FA and will support the club in identifying the offender(s) to ensure appropriate action is taken and strong punishment issued.”

England’s Euro 2020 qualifier in Bulgaria was halted twice as fans were warned about racist behaviour, including Nazi salutes and monkey chanting.

Aston Villa defender Tyrone Mings was targeted on his England debut, saying he had heard racist abuse while warming up before the 6-0 victory.

Well done for taking a stance, sometimes it can get brushed off in lower leagues but everyone stands with you. Our country isn’t perfect either. https://t.co/Wl70fErZBP

Mings expressed his support for Haringey walking off the field, tweeting: “Well done for taking a stance, sometimes it can get brushed off in lower leagues but everyone stands with you. Our country isn’t perfect either.”