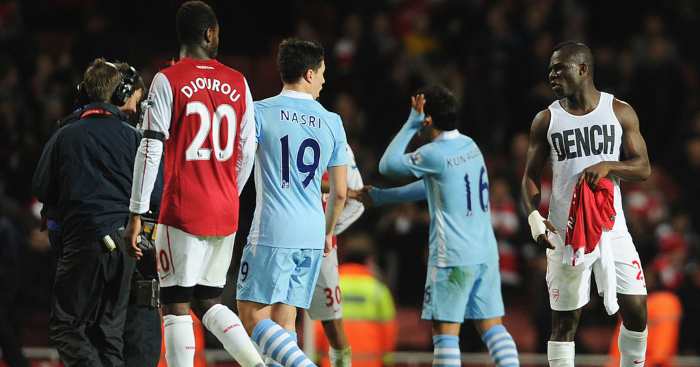 Emmanuel Frimpong “never liked” Samir Nasri and has told of a time when his former Arsenal team-mate allegedly threatened him over the phone.

“I have always had so much respect for senior players,” Frimpong told The Athletic. “You can ask Aaron Ramsey, you can ask Jack Wilshere. I never disrespected anybody. But for me, the truth is I’ve never liked Nasri and I will never, ever like this guy. Even if he gives me five billion dollars, I will still not like him.”

The duo were involved in an on-pitch altercation in the 2011 League Cup final after Nasri had swapped the Gunners for the blue of Manchester City and it was clear then that there was bad blood between the pair.

However, a lot of the dislike for each started when they were team-mates in Frimpong’s second league match against Liverpool.

Frimpong was sent off on 70 minutes after being shown two yellow cards with the game tied at 0-0, with the Gunners eventually losing the match 2-0.

“After the game, everybody came into the changing room and Arsene was quiet, you know. Obviously, he was disappointed about the result but he was quiet. He didn’t talk, and then Nasri basically stood up in front of everybody and said we lost the game because of me.

“OK, I can understand that, but I was thinking, ‘Why would somebody — especially me playing, I think that was like my second game — why would any professional do that to a young player in that kind of moment?’”

And the needle between the pair didn’t end there.

Wilshere tweeted a good luck message to Nasri on his departure to City, with Frimpong replying to the tweet: “Pffffff come on Jack.”

That was the end of it until Alex Song passed him his phone one day at the training ground, Frimpong added: “I took the phone and then it was Nasri on the phone threatening me, telling me that when he sees me, this that. I told him, ‘I’m not one of the players that’s afraid of you. If you want us to sort it out as men, we can sort it out as men.’

“To be honest, at that time when he left Arsenal, I could tell him what I actually thought about him because he was there so I could basically let him know my feelings. So I just told him that I don’t like him, I don’t respect him and I will never respect him as a professional player.”