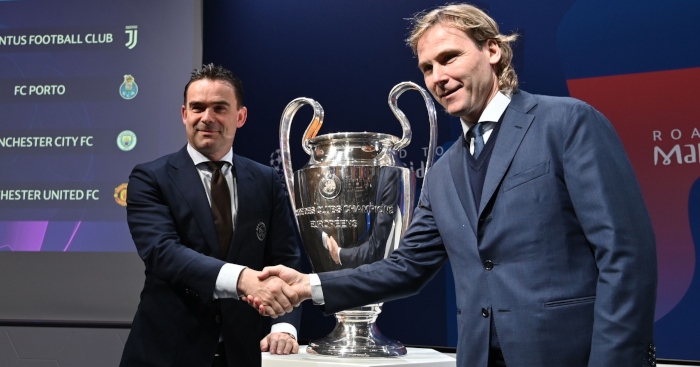 Manchester United are reportedly considering giving prominent roles to Rio Ferdinand and Darren Fletcher. Maybe they’re not as daft as we thought…

Marc Overmars and Edwin van der Sar (Ajax)
The policy of recruiting old boys doesn’t seem to be doing Ajax any harm. Quite the opposite.

On Johan Cruyff’s watch, the Champions League semi-finalists brought Overmars back to the club as director of football in 2012 after the former winger had spent a year as a coach within the club’s academy. Overmars had also been on the board at another of his former clubs, Go Ahead Eagles, with whom he began and concluded his playing career.

Shortly after Overmars’ appointment, Van der Sar returned to the Johan Cruyff Arena as marketing director. Explaining his career change, the former Manchester United keeper said:  “I could have made lots of money being a club ambassador at United and getting jet legged while endorsing beer but I wanted to aim for something different.”

Van der Sar prepared for the role by undertaking a masters degree in sports and brand management after hanging up his gloves. After four years as marketing director, he was promoted to CEO.

Van der Sar and Overmars were responsible for the sacking of another former Ajax star, Dennis Bergkamp. The Arsenal legend, then serving as assistant coach, was shown the door along with head coach Marcel Keize in December 2017 after what Van der Sar described as “a horrible summer and poor start to the season”. Since then, Van der Sar and Overmars have implemented their vision for Ajax, the stated aim of which was to “have an impact on European football again”.

It seems to be going rather well…

Not everyday you see Marc Overmars doing a bellyslide… 😅

Pavel Nedved (Juventus)
The former Golden Ball winner retired as a Juventus player in 2009, a year before being asked to serve as an ambassador while sitting on the club’s board of directors.

The following five years served as Nedved’s apprenticeship in a suit. “Pavel has developed massively over the last five years as a board member,” president Andrea Agnelli said in 2015 when the former Czech star was appointed as vice-president. “He’s now a skilled and knowledgeable member of staff and fully aware of all the various activities that go on inside the company. He possesses commercial perception and specific skills in the balance sheet analysis of a sporting business.”

But Nedved insisted his time would be mainly spent on football rather than business activities. “I am a quite peculiar vice-president compared to others in that part of my role is to be in daily contact with the technical staff, the coach and the players,” Nedved told The Telegraph in February.

The ‘Czech Fury’ would presumably endorse Ferdinand’s involvement at Manchester United having spoken of his surprise at the lack of former players playing prominent roles in running Premier League clubs. “I think it’s strange,” Nedved said.

“Those that follow this type of career and can do a good job are the ones who had a direct experience on the pitch and know what happens on the pitch. If people like that are given the opportunities they can do very well but obviously it’s not like you should stop playing, take your boots off and put your smart shoes on and become a director straight away.”

Nedved has helped oversee Juventus’s continued dominance of Serie A – eight in a row and counting – while the former €41million signing from Lazio in 2001 was also heavily involved in Juve’s change of tack which saw them spend a record sum on signing Cristiano Ronaldo in their so-far-fruitless pursuit of the Champions League.

Leonardo (PSG and AC Milan)
The former Brazil midfielder hung up his boots in 2003 after representing PSG, Valencia and Milan. He continued to work for the Rossoneri in the early stages of retirement, acting as an unofficial agent for the club in Brazil, with Kaka and Pato’s recruitment largely attributed to the World Cup winner.

He moved back to Milan, first as technical director before switching to the bench to replace Carlo Ancelotti in 2009. He lasted a single season in the dug-out before an even shorter stint as Inter boss.

Leonardo’s experience led to PSG’s new Qatari owners offering him the director of football role, with responsibility for spending the mega-f*cktonne of money about to flow through the Parc des Princes. Zlatan Ibrahimovic, Marco Verratti, Ezequiel Lavezzi, Lucas Moura, Javier Pastore, Thiago Motta and David Beckham were all recruited on Leonardo’s watch, as were Carlo Ancelotti and Laurent Blanc.

After overseeing PSG’s QSI-funded revival, which has so far failed to bring them the European glory they have craved, Leonardo resigned from his position in 2013 upon being given a 13-month ban for pushing a referee – a suspension which was subsequently overturned. Five years later, he is back at Milan in a similar role.

Paolo Maldini (AC Milan)
Working alongside Leonardo once more at AC Milan is Maldini, who returned to the San Siro last August in the newly-created role of sporting strategy and development director.

Maldini’s appointment came shortly after hedge fund Elliott Management took over the club from Li Yonghong’s board, with the new regime making no secret of their intention to bring back Milan’s former glories by establishing a tangible link with their past.

“Paolo is a living legend in the Rossoneri’s history for his exceptional class, talent, leadership, loyalty and record of success, which is unparalleled,” said the statement confirming Maldini’s return. “These qualities will play a decisive role in taking Milan back to where they deserve to be.”

It is too soon to conclude whether Maldini’s appointment has been a success or otherwise. The former left-back, who played 902 matches in a 25-year career with the Rossoneri, has had his say in the decision that has apparently been made to replace Gennaro Gattuso as coach in the summer with Milan slipping in the race for a Champions League place. Maldini’s reported choice for a replacement? Maurizio Sarri.

Karl-Heinz Rummenigge (Bayern Munich)
The two-time European Footballer of the Year, who scored 217 goals in 422 games for Bayern Munich through the 1970s and 80s, was invited to return to the club two years after his retirement. He and Franz Beckenbauer were both appointed vice-presidents in 1991.

Rummenigge helped oversee a Champions League title, a UEFA Cup triumph and five Bundesliga titles in 11 years before he was given more power in 2002, when he became CEO in a restructuring of the club’s structure. Since then, 11 more domestic titles have followed as well as another Champions League.

Under Rummenigge, Bayern have gathered the financial clout to compete with any other club not bankrolled by money from Qatar or UAE, with the £68million signing of Lucas Hernandez signalling their intent for the coming summer. Rummenigge also took Bayern to the Allianz Arena, their home since 2005, with the costs of the stadium met 15 years ahead of schedule.

Rummenigge will step down after 20 years at the helm in 2021, by which time the the 63-year-old will have spent two years grooming his successor – former Bayern goalkeeper Oliver Kahn.