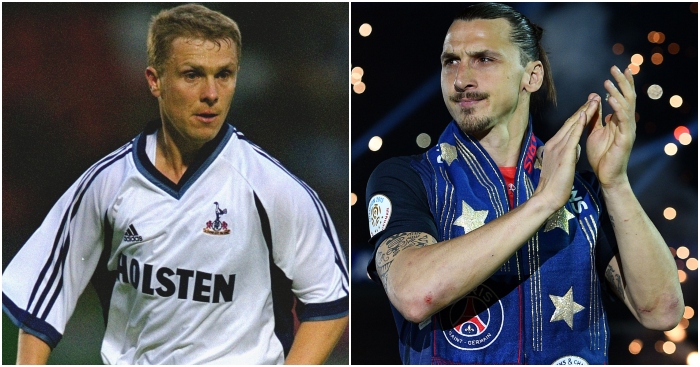 After Liverpool saw £20m signing Lazar Markovic head to Fulham for nothing, we take a look at similar deals over the years.

Zlatan Ibrahimovic
Zlatan cost PSG around £15.7million in 2012 – taking his career transfer fee total to £133.2m – when AC Milan went back on their word having told the striker that he would not be sold. Furious, Ibra tried to sabotage the deal, telling Mino Raiola to make a series of outlandish demands.

‘I spoke to Mino again and told him we weren’t going to make it easy for PSG,’ he wrote in his recent biography. ‘We were going to tell them that I wanted the same salary I had at Milan and we were going to ask for so much stuff that they’d think it wasn’t worth it. I told Mino to lay out all the conditions of my contract one by one. When we’d finished I said to my wife that they’d never accept all my demands, that there was no way it would go through. But 20 minutes later Mino sent me a text saying it had all been approved.’

Ibrahimovic’s form saw PSG extend that initial three-year contract to take his agreement to 2016 and even in the last six months of his deal, the Swede was reported to have been given a pay-rise to make him France’s best-paid player on £245,000 a week, which was seen as fair reward for 156 goals in 180 games. But Zlatan walked away from PSG for nothing in summer 2016, signing on a free for Manchester United.

A few months after leaving, he was asked what he missed most about PSG: “I miss my last salary from Paris. That is what I miss.”

My last game tomorrow at Parc des Princes. I came like a king, left like a legend pic.twitter.com/OpLL3wzKh0

Andriy Shevchenko
Roman Abramovich desperately wanted the Ukraine striker at Chelsea and the billionaire made his own dreams come true by signing Shevchenko from AC Milan for £30m in 2006, two years after he had won the Ballon d’Or.

But Shevchenko had a nightmare at Stamford Bridge. He netted just nine goals in 48 Premier League appearances under four different managers. He was loaned back to Milan two years after leaving the San Siro and Shevchenko flopped there too, scoring only two goals for a club with whom he had previously netted 173.

Shevchenko attributed the blame for his failure at Chelsea down to the manager who greeted him at Stamford Bridge: “Jose Mourinho was a great organiser, his attention to detail before matches was incredible, but maybe he needs to speak more with the players. Injuries was the main reason why my career in England was not viewed as a success. The Chelsea fans never really saw the real Shevchenko on the pitch.”

With 11 months remaining on his Chelsea contract in 2009, Shevchenko was released by the Blues to facilitate a return to Dynamo Kiev.

Kaka
The Brazil star became the world’s most expensive player ever when he left AC Milan in 2009 to join Real Madrid for £56m. But four years into a six-year deal, Kaka was allowed to return to the San Siro for nothing.

Like Shevchenko before him, Kaka fingered Mourinho and injuries for his failure away from Milan: “My problem at Madrid was continuity first and then the coach, as I spent three years trying to convince Mourinho that I should have more opportunities,” he said. “But it was his choice, it was out of my control. The first year I had a hip problem, then the adductor and I was operated on. I was out of action for six months and when I returned, it was Mourinho.”

Adriano Galliani had high hopes for the old boy’s return to Milan: “Now I hope Kaka’s orphans, the 12,000 or 15,000 fans that stopped coming to the stadium when he left, will come back now that Kaka’s returned.” But, again like Shevchenko, Kaka could not recapture his old form. He scored seven goals in 30 Serie A appearances before leaving for a second time halfway through his two-year deal.

Sergei Rebrov
The Ukraine striker almost doubled Tottenham’s previous transfer record when he moved from Dynamo Kiev for £11m – a considerable sum in 2000 which was worked out as the equivalent of £62million nowadays.

If a return of only nine Premier League goals in his first year didn’t set off alarm bells at Spurs, his comments before his second season definitely should have triggered a warning: “I’m not seriously putting down my roots in London. My present team, which I hope to see qualify for the Champions League in the new season, is not the top of my dreams.”

Glenn Hoddle replacing George Graham ended whatever hope Rebrov may have had of firing Spurs to the Champions League, with the striker netting just one goal in nine starts and 21 appearances off the bench. He fared no better in two loan stints at Fenerbahce, netting four league goals, before returning to Tottenham in 2004 only to be told not to bother with the final year of his deal.

Bosko Balaban
“Balaban is an exciting player… He’ll be a star in the Premiership” was Davor Suker’s verdict upon the Croatian’s arrival at Villa Park in 2001. His compatriot had secured a move to England from Dinamo Zagrab for £5.8m in 2001.

You could understand Villa fans’ wariness having watched the last little-known striker they signed for big money a year previously, Juan Pablo Angel, struggle massively in his first season. Angel was given time and eventually settled. Villa recognised quickly that Balaban wasn’t worth the same patience.

He made not a single start in the Premier League, managing only two in the cups while Villa were knocked out of both the League Cup and UEFA Cup.

All in all, he played 238 minutes across 10 appearances for the Villans in 2001-02 before being loaned back to Dinamo Zagreb the following season. Upon his return to Villa Park, his initial five-year £20,000-a-week contract was terminated with over half of it still to run, and Club Brugge soon swooped in.