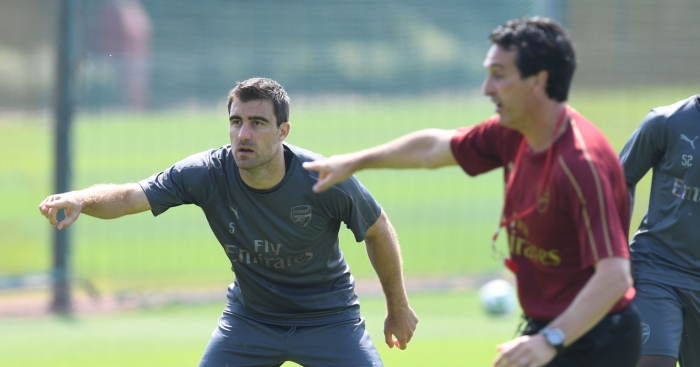 It was an inexplicable summer characterised by indecision, ineptitude and internal power struggles. The claims of a budget stretching well beyond £100m were either false or simply ignored, with Arsenal spending less than half that figure. Alex Oxlade-Chamberlain, Hector Bellerin and Shkodran Mustafi all asked to leave, while the decision to sell Alexis Sanchez and bring in a central midfielder were made too late to realise.

A failed attempt to sign Thomas Lemar with a late club-record bid created the impression of a side unfortunate to have the transfer window slammed shut on their fingers. But it was no more than a transparent effort to salvage a fraction of their reputation. Alexandre Lacazette was Arsenal’s second and final signing, made on July 5. The Gunners had deemed their business sufficient for a club with such lofty ambitions, before losing two of their first three Premier League games and promptly lunging for the panic button.

The term we used at the time was ‘chaotic’. Other options included ‘tumultuous’, ‘disorganised’, ‘confused’ or just plain ‘batsh*t mental’. It was an embarrassment, an entire novel of errors rather than a mere catalogue.

Ivan Gazidis had a rather different take. ‘We have once again improved the depth and quality of the squad,’ he insisted. ‘Everything is coloured by results.’ Arsenal had just lost 4-0 to Liverpool; the only colour on their palette was a decidedly unappealing shade of grey.

Twelve months later, the landscape is much brighter and the noise much less deafening. Unai Emery has helped oversee a quiet transfer revolution in north London, replacing baffling decision-making with ruthless problem-solving efficiency. It is quite the welcome change.

Emery has certainly been the beneficiary of circumstance. Arsenal have dealt with Arsene Wenger’s exit impeccably, shifting from one extreme to the other by reducing the influence any one individual can have in the club’s hierarchy going forward. From the ashes of omnipotence, a democracy has been established.

Instead of trying to crack Wenger’s maddening code, Arsenal just simplified the equation. The arrivals of Sven Mislintat, Raul Sanllehi and Huss Fahmy have disseminated power throughout the club, with each cog in the machine given a specific objective. The result has been striking. If Lucas Torreira signs as planned from Sampdoria, the entire spine has been strengthened in the space of six months.

The work that started with Pierre-Emerick Aubameyang and Henrikh Mkhitaryan’s arrivals in January has continued apace. Arsenal needed a new goalkeeper, and brought in a 26-year-old with extensive Bundesliga and Champions League experience. They desperately lacked a commanding central defender, and so signed a man “obsessed” with the art. They required a midfielder blessed with technique, tactical intelligence and temerity, and laid the foundations for a Serie A talent to join even before he impressed at the World Cup. It is an almost unnerving level of clarity and planning from a club who tied themselves in knots just last year.

With the added experience and nous of Stephan Lichtsteiner and the youthful promise of Matteo Guendouzi, Arsenal have covered pretty much every base possible. Bernd Leno, Sokratis Papastathopoulos and Lucas Torreira might not bridge the 37-point gap to Manchester City, but they do represent an impressive start to the extensive engineering work.

Most importantly, a return to the top four looks far more attainable. With less than a month remaining until the transfer window closes on August 9, Chelsea and Tottenham are yet to make a single signing. If Arsenal’s target is as basic as overhauling two of the clubs who finished above them last season, they look well-placed.

The Gunners could quite feasibly have planned and carried out their entire transfer business before the World Cup even ends. They can prepare for the season while many of their top-flight peers rush to get started before an ever-looming deadline.

The reported £50m budget has been exceeded, but certainly not wasted. No player still wanted by the manager is desperate to leave. There will be no panicked, last-minute decisions. After enduring the worst transfer window of any Premier League side last summer, Arsenal have responded with what is so far one of the best.