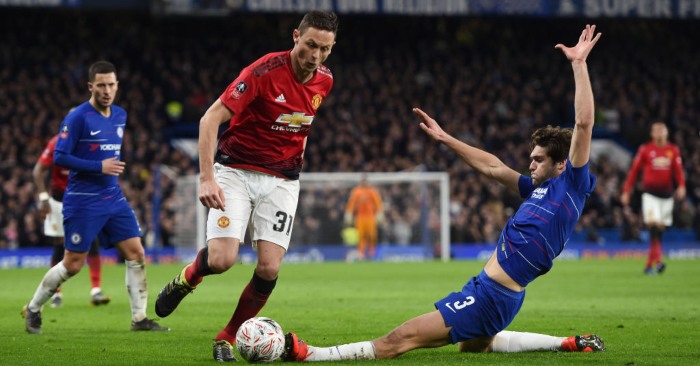 Nemanja Matic (Manchester United)
Nemanja Matic was the ideal signing for Chelsea in 2014, the perfect foil for Cesc Fabregas in central midfield in a title-winning season under Jose Mourinho. He would completely control the flow of a game and protect any given defence. So it was seen as something of a coup – albeit an expensive one – when Mourinho again signed Matic, this time for Manchester United, in 2017.

Matic started all but two games in his first season at Old Trafford and the vast majority of matches last season, but the consistency of performance he was famed for at Stamford Bridge gradually gave way to more ethereal drifts through whole matches. Really, really slowly.

Perhaps also tarnished by the brush of his close association with Mourinho in the latest ‘new dawn’ at United, Ole Gunnar Solskjaer has reduced the Serbian to just one substitute appearance – with Scott McTominay more liberally sprinkled with ‘Man Utd DNA’.

Nemanja Matic is yet to start a game this season for Manchester United…https://t.co/p203O8ocCh

Marcos Alonso (Chelsea)
More than an eyebrow or two was raised when Chelsea spent £20million to sign Marcos Alonso in 2016 after stints at Bolton and Sunderland did nothing to suggest he was cut out for a Premier League team pushing for silverware. After one point from the opening three games of that season, Antonio Conte changed his formation and Alonso was now a left wing-back; the Spaniard was a revelation. He did defend – a bit – but didn’t really have to. He had three centre-backs and an N’Golo Kante behind him so it wasn’t really necessary.

Two seasons later, Alonso finds himself sidelined. Emerson has started every game under Frank Lampard this season, and is considered the more defensively sound option in a back four. Although, given Chelsea’s devil-may-care attitude to defending so far, you’d think Frank would maybe think ‘f*** it’ and reinstate Alonso, with Willian in the Victor Moses role on the right.

Shkodran Mustafi (Arsenal)
Shkodran Mustafi signed for Arsenal for £35million in 2016 and has been the focus of ridicule – as well as on the verge of being sold – for 90% of the time since. It seems you can barely mention his name these days without a snigger or an eye roll. The German started 31 games for the Gunners last season, but is yet to feature this season (or even make the bench).

Ladies and Gentleman I present to you 35M Shkodran Mustafi pic.twitter.com/e29Av4oTKc

The latest scapegoat for a decade-long defensive issue at Arsenal, Mustafi is prone to more mistakes than a £90,000 per week centre-back should ever be. A headline in The Sun sums up attitudes towards Mustafi at Arsenal, in the media and in world football: ‘Arsenal failed to flog Mustafi as no clubs showed serious interest in gaffe-prone centre-back’. Thankfully Arsenal have addressed the thorny issue of their error-ridden defence by signing that pillar of reliability David Luiz.

Demarai Gray (Leicester City)
A year ago – almost to the day – Demarai Gray was called up to the full England squad for a friendly against Switzerland. He did not get his first cap but it looked like a matter of time. He was a favourite of Gareth Southgate for the England U21s and was starting games and scoring goals under Claude Puel at Leicester.

This season, the 23-year-old has had just 23 minutes of first-team action under Brendan Rodgers. The Leicester manager has spoken of the importance of ‘competition for places’ and it seems Ayoze Perez and Harvey Barnes – who is now surely ahead of Gray in the England reckoning –  are winning that fight as it stands. A year is a long time in football and Demarai Gray now knows that better than anyone…

Tom Davies (Everton)
Tom Davies knows it too. He was for a while the symbol of hope at Goodison Park. In the dark days at the end of Ronald Koeman’s time as manager and throughout the tenure of Sam Allardyce, the Toffees still had their local lad. They could deal with the lacklustre performances and boring football as long as they saw those blonde locks bouncing on the shoulders of their youth-team chorister (or something; we may have got carried away there).

The chop 👌
The finish 🔥
The celebration 🙌

Who can forget that Tom Davies’ goal against Manchester City!? 🤩 #EFCMatchday pic.twitter.com/tBjONA988c

The 21-year-old has now been in and around the first team at Everton for three years; he is much more around it than in it currently. With just 11 Premier League minutes to his name this season, Davies has been a victim of the rebuild at Everton. Andre Gomes, Morgan Schneiderlin and Fabian Delph are Marco Silva’s preferred options in central midfield.