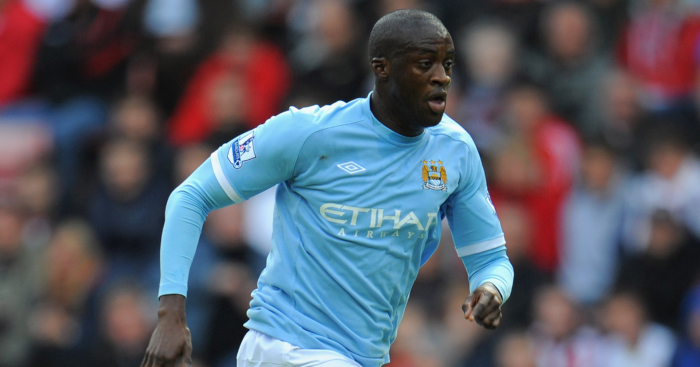 “The Ivorian is an average player who’s rumoured to be on £200,000 a week! Does he score goals? No. Does he create them? No. Is he an OK holding midfield player? Yeah – but De Jong, Vieira and Barry do that job already!”

It’s easy to laugh at Paul Merson when you read his reaction to Manchester City’s purchase of Yaya Toure in 2010. Indeed, it’s easy to laugh at Paul Merson. But it is also important to acknowledge that Merson was far from alone in his cynicism about City making an unwanted bit-part Barcelona midfielder the highest-paid player in the Premier League. This was football money gone mad and a sign of the apocalypse. Toure had barely registered on the general British public’s radar and yet here he was earning more money than Wayne Rooney, Steven Gerrard or John Terry. Thankfully, my own piece on this apparently ridiculous transfer has fallen victim to our lost archives.

The News of the World broke the news of ‘the craziest contract in English football’ and predicted that ‘the staggering sums will astonish fans already fed up with over-paid stars failing to justify their super-sized salaries’. They did indeed astonish fans, who scoffed at the idea of England’s fifth-best team being forced to pay extraordinary sums for seemingly average footballers. Toure had started just 18 of Barcelona’s La Liga games on the way to a second title, usurped by the emerging brilliance of Sergio Busquets; here was a ‘reject’, not a marquee signing.

‘Incredibly, City believe his arrival suddenly turns them into major players,’ continued that particular report, and it really did seem ‘incredible’. City had just finished 19 points behind champions Manchester United despite spending £125m the previous summer; that gap could not be bridged by a lumbering non-scoring midfielder, regardless of his brilliant performance as a centre-half against United in the Champions League final the previous May.

We now know that it took just two short seasons to bridge that 19-point gap, punctuated by a first trophy of the modern era, claimed with a single goal from City’s non-scoring, non-creative midfielder. Of course, the Ivorian was not solely responsible for that successful two-year chase – City also bought David Silva, Mario Balotelli, Aleksandar Kolarov, James Milner, Edin Dzeko, Gael Clichy, Samir Nasri and, crucially, Sergio Aguero in that spell – but he was central, both figuratively and literally, to that rise. City may have originally bought Toure because Garry Cook wanted to flex his muscles by signing any Barcelona player, but he may have accidentally bought exactly the right Barcelona player.

Manchester City chairman Khaldoon Al Mubarak rather embarrassingly got the year wrong in his speech as he unveiled a Toure plaque at the City Football Academy this week, but the sentiment was perfect: “Yaya Toure is a very special footballer and the importance of his contribution to Manchester City Football Club is indisputable. He had a positive impact from the moment he signed with us in the Summer of 2011, driving the team forward with his unique blend of talent, strength and style.”

Perhaps too much is made of the importance of ‘winners’ in a title-chasing squad – after all, Leicester did rather well on a diet of momentum – but this modern incarnation of City needed a figurehead. They already had a leader in Vincent Kompany but they lacked a driving force, an imposing figure that would frighten the opposition not just physically but mentally.

To Roberto Mancini’s credit, he saw that in Toure; he pushed him further up the pitch – often playing him ahead of both Barry and De Jong – and the non-scoring midfielder scored 12 times, doubling his three-year Barcelona total in one season.

At his peak – and City’s second title win of 2013/14 was certainly his peak – he was an unstoppable force of nature. As Frank Lampard explains: “He controlled possession and set the tempo for the team – then he unloaded and went forward to create or score. I loved that because it made him different, and made him very difficult to mark.”

That season, it made him practically impossible to mark; he was simultaneously both bulldozer and magic wand, and that is one hell of a trick. Luis Suarez might have walked away with that season’s individual awards but Toure was the man who dragged City to an unlikely title. Al Mubarak was absolutely right to use the word ‘legend’ as he paid tribute.

His influence has since understandably waned as there is an awful lot of football in those long legs, but Toure has – by all accounts – trained diligently and been a positive presence in the dressing room under Pep Guardiola, who was happy to gift him the opportunity to win a third title.

Whether he initially joined for the money, or simply to play with his brother, is now immaterial: Manchester City has loved Yaya Toure and Yaya Toure has loved Manchester City. He arrived as a ‘Barcelona reject’ but he will leave as the first modern City legend; his greatest achievement was not to earn vast amounts of money but, in his words, to “put Manchester United in City’s shadow”. He became one of their own.

Our only wish is that Toure now takes the opportunity to end his playing career somewhere far from the Premier League. Having seen and loved him at his best, we do not want to sully that memory by seeing him at his worst.

Now he really might be just an OK holding midfield player, we would much rather re-watch videos of 2013/14. Before the decline. Before the ‘hilarious’ birthday cake banter. Before he lumbers around the pitch in any other colour but City blue.