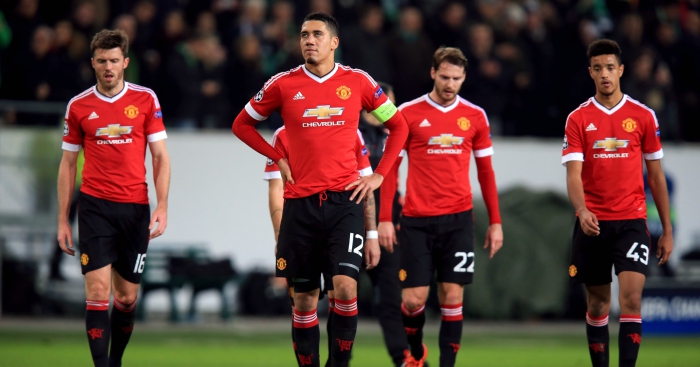 Crystal Palace currently have nine players out. Remember when Man United were missing 15 and still won?

Roy Hodgson described it as “the worst injury crisis I’ve faced in my five decades of football management” back in January, but February has brought Crystal Palace no improvement in fortune. It now seems like there are as many players in the treatment room as there are in a first-team training session, with Wilfried Zaha the latest to join the walking wounded.

“When everybody was fit, we were first in the league at that time,” said Louis van Gaal in January 2016. “Then when we had 14 injuries, or the double injuries on the full-back positions, I could not solve that problem.”

The Dutchman was, of course, being somewhat generous with his assessment. Manchester United topped the Premier League table at the end of just two matchdays in the 2014/15 season: the second and the seventh. Van Gaal was referring to a point midway through the season, when United briefly sat top of the pile after a 2-1 win over Watford in November 2015. Leicester would reclaim their throne hours later.

United were second behind the Foxes at that point, but won just one of their next eight games after the Watford victory. Draws with West Ham, Leicester, Chelsea and Newcastle and a win over Swansea sandwiched three consecutive defeats to Bournemouth, Norwich and Stoke. Oh, those halcyon days.

The mitigating circumstance was that aforementioned list of injuries – although Van Gaal’s claim of 14 was an exaggeration. A defence of Guillermo Varela, Paddy McNair, Daley Blind and Cameron Borthwick-Jackson started in the Bournemouth defeat, while the issues spilled over into the Champions League. In a must-win final group game away at Wolfsburg, the only game-changing talent Van Gaal had to call upon from his bench was Nick Powell. He joined Hull in the Championship one month later.

If one was to try and bottle the purest form of Harry Redknapp possible, look no further than March 2010. Tottenham were on course to qualify for the Champions League, but faced a difficult trip to Stoke. They would be without Jermain Defoe (hamstring), Ledley King (thigh), Jermaine Jenas (groin), Aaron Lennon (groin), David Bentley (groin/virus), Danny Rose (knee), Kyle Walker (arm), Jonathan Woodgate (groin) and Carlo Cudicini (wrist/pelvis). It was quite the list of absentees.

Not that it was enough to faze Redknapp. He started six defenders, with Gareth Bale, still largely recognised as a left-back, deployed on the wing, and Younes Kaboul in central midfield. January loan signing Eidur Gudjohnsen scored the first goal in a 2-1 win, while Niko Kranjcar bagged the winner. I’d like to report a Redknapping to the police.

“Wolfsburg will be delighted we have so many injuries,” said Sir Alex Ferguson in December 2009. Manchester United’s final Champions League group stage game of that campaign was a trip to the German side, and they needed to win to assure themselves top spot. But they would have to do so without a grand total of 15 first-team players. The crisis ran so deep that Oliver Gill, son of chief executive David, had to be drafted in as emergency cover.

Manchester United might be staring down the barrel of the same points gap now, but they led the Premier League table by 13 points at almost this exact stage 17 years ago. Twenty-seven games into the season, they were closing in on yet another title, and were to host second-placed Arsenal in their next match.

This was Arsenal’s final chance to claw back some of the deficit, if not simply save face. United had been top since October, with Arsenal growing accustomed to the taste of their dust. Could they at least stall United’s title procession?

Let Ray Parlour tell you the rest of the story via his 2016 autobiography, The Romford Pele:

‘Arsène was so clever at identifying great players to come in. But there were one or two gambles that didn’t quite come off. In the summer of 2000 a player turned up on trial at our pre-season tour. He was a tall centre-half. This big guy from Latvia, Igors Stepanovs, turned up. He was a unit, but seriously, he was not up to standard.

‘When we got back to the training ground at London Colney a week later we had a surprise though. Igors was sitting there. I said: “What are you doing here?” “They signed me. Four-year contract.”

‘The next thing we know we’ve got the biggest injury crisis we’ve ever had at centre-half. And the only fit centre-half we’ve got is Igors and who are we playing at the weekend? Man United at Old Trafford. Going into the game our back four looked a bit dicey really. Oleg Luzhny, Gilles Grimandi, Igors and Ashley Cole, who had to go off at half-time.

‘Dwight Yorke ran us ragged. Seriously, it was humiliating. They scored the first goal and we managed to equalise. We thought: “OK, we’ll take that.” And then all of a sudden the goals started pouring in and we were 5-1 down by half-time. There is a massive walk to the tunnel at Old Trafford and you could see Arsène was fuming. He hardly every swore or shouted but he did that day. I remember doing the long walk to the tunnel alongside Dwight Yorke and he asked: “Where the hell did you get that centre-half from?” “Look, it’s a long story …”

Arsenals back 5 when we lost 6-1 to United in 2001: Seaman, Luzhny, Cole, Grimandi, Stepanovs #floodgates

Many feel Arsenal’s double-winning side of 1998 was a more impressive, more rounded group that the Invincibles of 2004. Lee Dixon, a member of the former side, is among them.

“We had everything,” he said in 2013. “We had an experienced back four and keeper, and the youth and tenacity of Patrick Vieira and Emmanuel Petit in midfield. We had pace all over the place with Marc Overmars and Ray Parlour, and upfront we had the genius of Dennis Bergkamp and this unplayable kid Nicolas Anelka.”

In a Premier League game against Crystal Palace in February 1998, Arsenal had barely any of these assets. Liverpool legend Alex Manninger was in net, not David Seaman. The back four was Dixon, Martin Keown, Gilles Grimandi and Matthew Upson. In midfield was Luis Boa Morte, Stephen Hughes, David Platt, Paolo Vernazza and Patrick Vieira. Alone up front was Nicolas Anelka.

Even with nine of the club’s first choice starting XI injured, Arsenal emerged 1-0 winners. And as if to hammer home the point, an 18-year-old Gavin McGowan was the only substitute, making his only appearance of the season.

It is a cruel twist of fate for an injury crisis to inadvertently help end the career of a player asked to try and help solve it. Joe Parkinson, one of Everton’s three ‘Dogs of War’ under Joe Royle alongside John Ebbrell and Barry Horne, had started 17 of their first 18 Premier League games in the 1996/97 season, but a training ground collision just before Christmas 1996 put him out of action. Or at least it should have. Ebbrell, Andrei Kanchelskis, Andy Hinchcliffe, Craig Short and Jon O’Connor were all unavailable, among others, and so Everton had to find a solution.

Royle felt forced to ask Parkinson to play the next match against Middlesbrough on Boxing Day. Not only that, he had to mark Juninho, and with damaged cartilage in his left knee, no less.

It did not end well. Boro won 4-2, with Juninho scoring twice. Parkinson played the full match, further aggravating his knee, and shortening his career exponentially. He played just nine games thereafter before retiring at 28, over two-and-a-half years after his last match.

“I played on for six weeks,” Parkinson recalled in November 1999. “But it just got stiffer and stiffer, so I had to stop. That was it then.”

Middlesbrough were no strangers to a selection crisis, but the one they suffered just under a week before that victory over Everton proved cataclysmic. Bryan Robson’s side were scheduled to face Blackburn in a relegation six-pointer on December 21, but cancelled the game with just 24 hours’ notice.

The reasoning was simple. Of a first-team squad of 30, Middlesbrough claimed that 23 were unavailable due to a combination of a virus outbreak, injuries and suspensions. The club had the option of fielding youth players against Blackburn, but understandably decided it would be akin to forfeit – a choice they wished to avoid as it would award Rovers three points in their own fight for survival.

The Premier League opted to dock Boro three points, and reschedule the game for April, when the two teams drew 0-0. The irony was that Middlesbrough were relegated by two points that season; had they simply played the reserves in the original game, they would have stayed up by one point.