Home F365 Features Frozen out: A European XI struggling to get a game 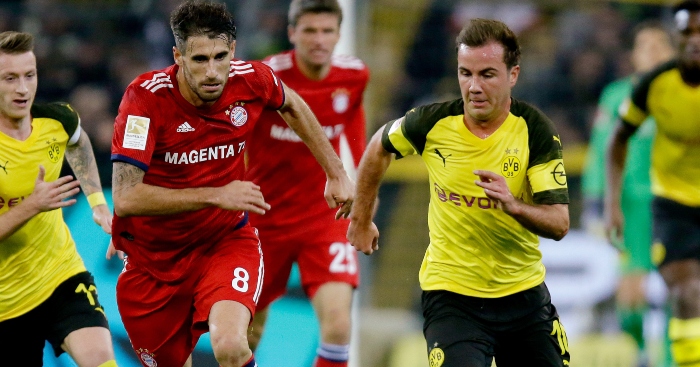 GK: Danijel Subasic (Monaco)
Just over a year ago, Subasic was one of Croatia’s heroes during their run to the World Cup final. Now, the 34-year-old can’t get on Monaco’s bench following Leonardo Jardim’s purchase of Benjamin Lecomte from Montpellier in the summer. Subasic cannot complain about the decision to recruit a new goalkeeper as he missed a decent chunk of last season through injury, but with veteran Switzerland stopper Diego Benaglio also among Monaco’s ranks, Subasic has not been required to dirty his gloves even to warm up Lecomte.

RB: Elseid Hysaj (Napoli)
The Albania right-back was linked with a host of Premier League clubs and nothing about his current situation at Napoli is doing anything to quieten such talk. Prior to Napoli’s last outing, a 0-0 draw against Torino, the 25-year-old had yet to be given a start. When Carlo Ancelotti finally named Hysaj in his side, the defender had to be carried off before half-time with what turned out to be a fractured sternum. There is no sign of an extension to his contract which expires next summer and, in any case, his agent has said that Hysaj won’t re-sign: “He will probably leave in January, seeing as his contract is running down.”

CB: Emre Can (Juventus)
The former Liverpool star can’t catch a break this season. His first year after moving to Juventus on a free from Anfield went smoothly, even if his former side won the Champions League in his absence. But since Maurizio Sarri took over Juve, Can has struggled. The Serie A champions recruited two more free agents, Aaron Ramsey and Adrien Rabiot, to play in his position, and even though neither of the new boys have made themselves regulars in Sarri’s side, Can can’t get a start. He has been restricted to three Serie A substitute appearances, which is more than he will manage in the Champions League since he did not even make Sarri’s squad. Nor is there any respite to be found on the international stage. Can was given a start by Germany against Estonia this weekend but he was promptly sent off after 14 minutes.

CB: Javi Martinez (Bayern Munich)
Martinez was a regular presence in Niko Kovac’s side last season and on the nine occasions he watched from the bench, Bayern won only four of those matches. So the 31-year-old’s frustration over not having started a game yet this season is somewhat understandable. Bayern had to deny that Martinez was in tears on the bench prior to their last outing, a surprise home defeat to Hoffenheim, and there is little sympathy among the hierarchy for his plight. “Of course it’s frustrating for Javi that he’s not playing,” said sporting director Hasan Salihamidiz. “But the coach has decided in favour of this formation and the players must accept that.”

LB: Leighton Baines (Everton)
“Leighton is part of the club’s fabric and a top-class professional,” Marco Silva said upon handing Baines a new contract in the summer. “Most importantly, Leighton is still an exceptionally good footballer and features in our vision for what we want to achieve at Everton.” Only, he doesn’t. The 34-year-old is yet to make it on to a Premier League bench this season and even in the Carabao Cup at Lincoln was the former England defender allowed within spitting distance of a football pitch. Though that courtesy wasn’t extended to the next round at Sheffield Wednesday.

CM: Hector Herrera (Atletico Madrid)
The Mexico star was widely lauded as a shrewd acquisition when he joined Atletico in the summer upon the expiry of his Porto contract. But Herrera was made to sit and watch the first 436 minutes of Atletico’s season before Diego Simeone threw the midfield dog a bone when his side were losing 2-0 to Juventus in the Champions League. The 29-year-old grabbed his opportunity, scoring a last-minute equaliser which was rewarded with a start in the following La Liga match against Celta Vigo. An uninspiring hour later, Herrera was plonked back on the bench, where he has remained for all but 18 minutes of the four matches since. “He is a great player who is working very well with the team,” explained Simeone. “But we have Saul, we have Koke, we have Thomas Thomas, we have Marcos Llorente.” Since Herrera was reportedly signed from above Simeone’s head, it seems that the midfielder will have to work harder than anyone else for game time.

CM: Ivan Rakitic (Barcelona)
“There’s no better place to play than Barcelona,” said Rakitic last week. “It’s the best club in the world, but I need to play and not just enjoy walks around the city and the beach.” You understand his frustration. Frenkie De Jong’s arrival from Ajax has seen the Croatia midfielder go from being a first-team regular to a bit-part player having to make the most of the odd cameo off the bench. On the one occasion he was named in Ernesto Valverde’s XI, Rakitic was hooked after an hour when Barca were beaten 2-0 by Granada. With a season and a half remaining on his contract by the time the January transfer window opens, it seems a Nou Camp exit is inevitable for the 31-year-old. Manchester United?

RW: Brahim Diaz (Real Madrid)
The 20-year-old seems adamant that he knows best. Diaz was absolutely certain that leaving Manchester City was in his best interests, despite Pep Guardiola’s pleas for patience. Now, at Real Madrid, the attacker is facing a similar predicament. Zinedine Zidane, apparently, likes the player – just not enough to play him. Diaz is yet to make any of Zidane’s match-day squads this season, which should come as no surprise since he was urged in the summer to find himself a nice loan move. Diaz didn’t take the hint so he has been left kicking his heels way down the pecking order.

AM: Mario Gotze (Borussia Dortmund)
In five years, Gotze has gone from scoring the winning goal in the World Cup final as one of world football’s hottest properties to warming Borussia Dortmund’s bench. This is a pivotal season for the 27-year-old, with his Dortmund contract up next summer and no sign of a renewal, especially while one of the club’s highest-paid players occupies the bench. Gotze has actually started Dortmund’s last two Bundesliga matches as a centre-forward in Paco Alcacer’s absence and though we don’t know yet for certain which is Gotze’s best position, we can assume it isn’t as the central striker.

LW: Mesut Ozil (Arsenal)
Unai Emery dabbled with Ozil last month having not used him in any of Arsenal’s first four games of the season, but 71 minutes in the horror show at Watford was enough for the Gunners boss to conclude that his instinct was right: Ozil is just not for him. Arsenal’s problem with that is the huge deal they gave the German shortly before Emery was appointed. His huge wages have so far made the 30-year-old impossible to shift, especially all the while Ozil is quite content to pick up his money for nothing other than the odd Carabao Cup run-out. The situation will surely come to a head in January when Arsenal will most likely end up loaning out their highest-paid player while coughing up a huge slice of his salary for him to be someone else’s problem.

CF: Mario Mandzukic (Juventus)
The Croatia striker hasn’t set foot on a pitch for Juventus this season having decided at the end of the summer transfer window not to rush a decision over his future amid interest from Manchester United, PSG and clubs in Qatar. Maurizio Sarri has given Mandzukic plenty of time to mull it over before January with the 33-year-old on the bench for three of Juve’s first four Serie A matches, but he hasn’t even made the squad in recent weeks. Should United cough up a fair sum, Juve are said to be willing to let Mandzukic move to Manchester before January to allow him to acclimatise to England. He might as well since he’s neither use nor ornament to Sarri.