Home All The News Frozen out: Premier League players not even on the bench 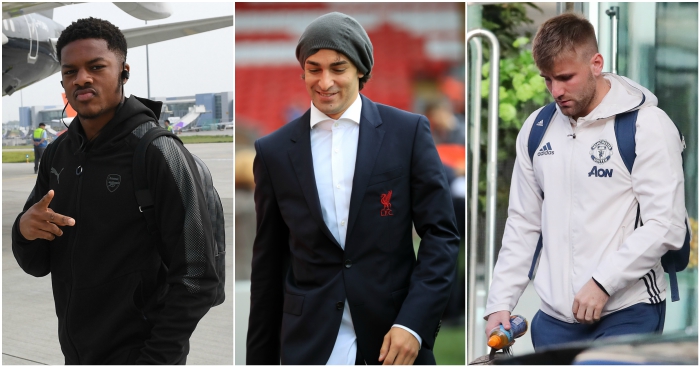 Which players have failed to make the matchday squads for their Premier League clubs this season, despite being fit and (just about) able?

ARSENAL
Chuba Akpom – His season in the first team amounts to 50 minutes in the Carabao Cup. But he’s no Eddie Nketiah.

BOURNEMOUTH
N/A – Rhoys Wiggins hasn’t been on the bench in a Premier League game this season, but considering he underwent a second operation to straighten his knee in April, we’ll let him off.

BRIGHTON
Ales Mateju – The 21-year-old was expected to be loaned out immediately upon arriving this summer. He was not.
Henrik Bjordal – Despite spending last season on loan with IFK Göteborg, the 20-year-old stayed put this summer. He is surely delighted with his decision.
Soufyan Ahannach – The most pointless signing of the summer.

BURNLEY
Fredrik Ulvestad – Last seen being substituted at half-time in a 2-0 defeat for Burnley’s Under 23s against their Crewe counterparts.

CHELSEA
Wallace Oliveira – What does a hungover Chelsea fan do when asked to name their favourite 23-year-old Brazilian who joined the club in January 2013 yet has not played a single game? Wallace and vomit.
Matej Delac – Chelsea’s longest-serving player is on his way out. If Antonio Conte doesn’t start him in the Champions League final, we riot.
Eduardo – He can be on the bench for said Champions League final. It’s only fair.

CRYSTAL PALACE
N/A – Even Jordon Mutch has been in a Premier League match-day squad for Crystal Palace this season.

EVERTON
Luke Garbutt – Once a leading light of Everton’s production line, the left-back is now 24, and frozen out by the club’s last two managers. Unsie might give him a chance.

HUDDERSFIELD
Ryan Schofield – Sarah Winterburn had never heard of him, which is presumably a bigger setback than not being on a Premier League bench.

LEICESTER
Eldin Jakupovic – Why did they sign him?
Yohan Benalouane – And him?
Ahmed Musa – And him?

LIVERPOOL
Lazar Markovic – Named in Liverpool’s Premier League squad, but not a sniff of a game. Reckon he’s still worth £20million?
Danny Ings – Scored four goals and assisted a further two in a 7-0 trouncing of Bristol City’s Under-23s last week. Ings probably can’t actually get better than that.

MANCHESTER UNITED
Joel Pereira – ‘Has the potential to be even better than’ David de Gea. Is not playing quite as often.
Luke Shaw – It’s all a bit sad, really.
James Wilson – The 21-year-old described a January loan move as “a possibility” last month. The legacy left by Ryan Giggs’ legendary four-game tenure erodes further.

NEWCASTLE
Jack Colback – “Jack knows the situation,” said Rafael Benitez last week – the situation being that the pair fell out in the summer. Remember when he was called up for England?
Massadio Haidara – Has as many Premier League minutes as his good friend Callum McManaman this season.
Curtis Good – Curtis bad.

SOUTHAMPTON
Josh Sims – Unlike me in my youth, Mauricio Pellegrino is refusing to play the Sims.
Florin Gardos – Was linked with Liverpool once. True story.
Jack Rose – Any Titanic fan’s favourite footballer was released by West Brom in the summer. There was probably a reason.

STOKE
Thibaud Verlinden – “This is the first year really when we’ve had a number of young players that we feel, given a fair wind, will be able to progress and be Premier League footballers,” said Mark Hughes in July. Sure.
Ollie Shenton – As above.

SWANSEA
Erwin Mulder – Things are getting strange, I’m starting to worry. This is not a case for Mulder, nor Scully.
Kenji Gorré – Spent time in both Manchester City and Manchester United’s academies, was a target for Arsenal and Chelsea in his youth, and had a trial at Celtic. Is also an international. For Curaçao.

TOTTENHAM
N/A – Just as the Irishman before him, Paul O’Gazzaniga is following in the footsteps of Paul O’Pez by carving out a successful career as Tottenham’s third-choice goalkeeper.

WATFORD
Brice Dja Djedjé – Since he was signed by Watford for £3m in July 2016, the right-back has made as many first-team appearances as he has been omitted from Premier League squads (2).
Daniel Bachmann – Never made a single first-team appearance for Stoke in six years. Hoping to emulate that record at Vicarage Road.

WEST BROM
N/A – Tony Pulis has even named the kids on a West Brom bench at least once. He’ll probably be blaming them for a record of three wins in their last 23 Premier League games.

WEST HAM
N/A – Until David Moyes signs Joseph Yobo, he inherits a West Ham squad where every fit player has been afforded at least one chance.