Home F365 Features Frozen out: The players who haven’t even made a PL bench 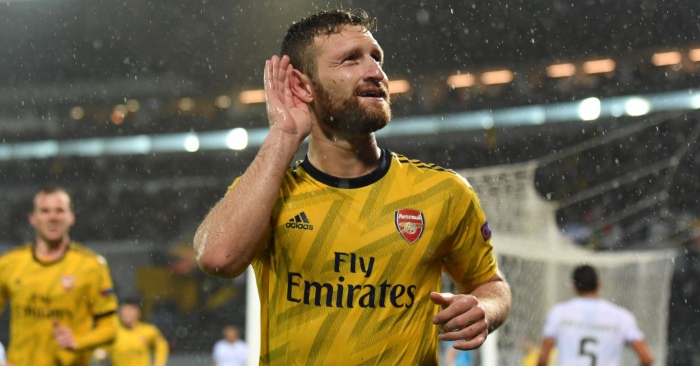 Which players have failed to make the matchday squads for their Premier League clubs this season, despite being (mostly) fit and (just about) able? Only players 20 and over and included for reasons of fairness.

ARSENAL
Shkodran Mustafi – Counting down the days until he can leave in January and stop being blamed for Arsenal’s porous defence even when he is not actually playing.

Konstantinos Mavropanos – Fit since mid-September but very much sixth-choice centre-half for Arsenal this season; he is usually to be found not keeping a clean sheet for Arsenal’s Under-23 Premier League 2 side. All good football clubs have continuity between age groups.

ASTON VILLA
Lovre Kalinic – Fourth-choice goalkeeper ahoy. He can make the bench for Croatia but not for Aston Villa. These are curious times.

Kortney Hause – Even in the absence of Bjorn Engels this weekend, it was James Chester who made the bench. We just hope Dean Smith lets him play in the Carabao Cup against Liverpool’s bairns.

BOURNEMOUTH
Mark Travers – It feels really quite harsh that he is behind even Artur Boruc in the pecking order.

BRIGHTON
Andrew Crofts – We continue to be amused that they included him in their Premier League squad.

Jason Steele – The former Middlesbrough keeper has only ever played 90 minutes for Brighton; a 3-1 FA Cup win in January. Poor sod.

Michael Hector – Four years at Chelsea without actually ever playing for Chelsea. You almost have to admire that.

EVERTON
Cuco Martina – Marco Silva claims that Martina and Oumar Niasse have “known everything since the first day of pre-season” and yet they still remain.

Oumar Niasse – He scored twice in the leasing.com Trophy last week. The £13.5m signing has still got it. And bizarrely he is still only 29.

LEICESTER CITY
Eldin Jakupovic – He definitely joined the Foxes so he could face Scunthorpe in the leasing.com Trophy.

Daniel Amartey – “We’ll have a look at that in January for him,” said Brendan Rodgers. “He’s still there, he’s very much in touching distance of the squad, but hasn’t featured.”

Philip Benkovic – A £13m signing that has somehow found himself as fourth-choice centre-back; a loan away beckons in January.

George Thomas – Captain of Leicester’s Under-23 side but it must hurt that he is younger than Harvey Barnes.

LIVERPOOL
Nothing to see here. Even Andy Lonergan has made it onto the Liverpool bench.

MANCHESTER CITY
Nothing to see here. Even Scott Carson has made it onto the Manchester City bench.

NEWCASTLE UNITED
Henri Saivet -The Frenchman was one of a quintet of players who was given a Premier League squad place this season. But unlike Achraf Lazaar and Rolando Aarons, he stayed put.

#NUFC’s Henri Saivet. Number 40 in ‘Worlds Most Exciting Teenager Footballers 2007’. Where did it all go wrong?? https://t.co/O0ZPIDNtfB

Jack Colback – He stayed too.

Jamie Sterry – And so did he.

Rob Elliot – Goalkeeper who has not actually appeared in the Premier League since December 2017.

NORWICH CITY
Nothing to see here. They really are doomed.

SHEFFIELD UNITED
Ricky Holmes – He was told to leave; he didn’t leave.

Kean Bryan – Far more famous for being the boyfriend of Coronation Street star Brooke Vincent (they have just had a child) than being Sheffield United’s sixth-choice centre-half.

SOUTHAMPTON
Nothing to see here. This is as good as it gets for Southampton.

TOTTENHAM
Nothing to see here. This is as good as it gets for Tottenham.

WATFORD
Marvin Zeegelaar – Left-back who last featured in the Premier League for Watford in February 2018; they lost 2-0.

Tom Dele-Bashiru – He left Manchester City for first-team football; he has played 18 minutes in the Carabao Cup.

Pontus Dahlberg – And their fourth.

WEST HAM UNITED
Nothing to see here. This is as good as it gets for West Ham.

WOLVES
Jordan Graham – He has only played a handful of games for Wolves since a serious injury early in 2016.

Ming-yang Yang – He is 24, Swiss and has never actually played for Wolves. He will probably never play for Wolves.

Bruno Jordao – A summer signing from Lazio, he has been given the No. 6 shirt but is yet to make a Premier League bench.

Flávio Cristóvão – A summer signing from Desportivo Aves who just about makes the bench for the Wolves Under-23 side.