Home All The News ‘Frustrated’ Saints keeper set to move on 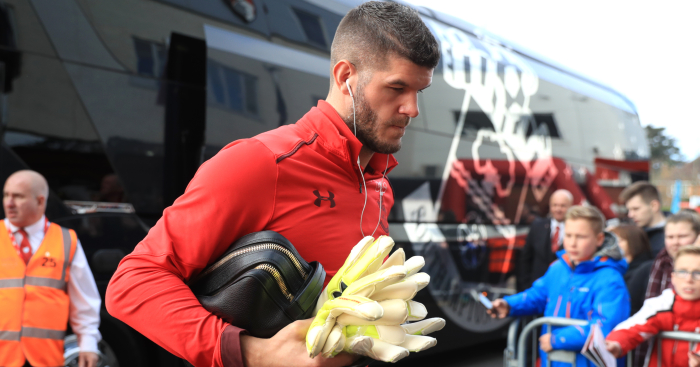 England goalkeeper Fraser Forster could be allowed to leave Southampton on loan after becoming “frustrated” with his lack of first-team opportunities.

The 30-year-old is one of the top earners at St Mary’s and manager Mark Hughes is willing to consider offers for him.

With the Premier League transfer window now shut, Forster would have to move abroad or to a lower-league club.

“If it’s a good option, a viable option for him, then he would probably take it because he wants to play,” said Hughes.

“He’s clearly a little bit frustrated, we’ll just have to wait and see.

“If there is interest or the clubs that are interested come in for him, it’s a decision he will have to have a thought (on).

“If it’s not the right club for him, or the right country, or the right level then as a manager I’m quite happy to have three outstanding keepers. We’re all a little bit selfish.”

Forster, signed from Celtic in 2014, lost his place in Saints’ starting XI after the 5-2 defeat to Tottenham on Boxing Day.

He has not featured at all since Hughes replaced the sacked Mauricio Pellegrino in March, including in pre-season.

McCarthy is expected to start the Premier League opener against Burnley on Sunday, with England Under-21 keeper Gunn, bought from Manchester City in July, on the bench and Forster left out of the squad.

Deadline-day signing Danny Ings could make his debut against the Clarets.

Hughes insists he has no concerns about Ings’ poor injury record.

“There’s risk with every player that you bring to a club, he’s over the injury, that’s the important thing and he’s been back a while now,” said the Welshman.

“It’s not something we considered, obviously we are mindful of any player that’s had an injury.

“He’s proved his fitness, it’s not as if we have to get him rehabbed, he’s a fit young man – he’s had the injury in his younger years.

“So, you always get a better response and outcome when that happens. We don’t have any worries about his injury.”

Southampton have a fully-fit squad for the Burnley game after defender Cedric Soares recovered from illness.