Home Liverpool Frustrating, but Liverpool’s fear factor is back 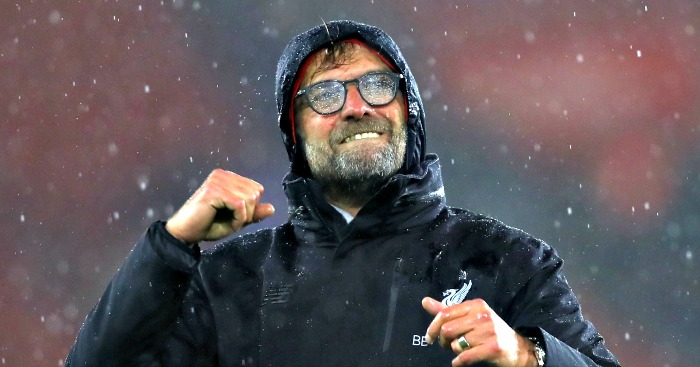 “They’re not the last wonder of the world like you try to say they are, but they are a very good team.”

In terms of compliments, Liverpool could hardly have asked for much more. Even in attempting to piss on the Anfield bonfire in a way only he can, Jose Mourinho had to stop and admire the view. He had to admit, through gritted teeth, that he was impressed by his old enemy.

The Portuguese had just guided Manchester United to a 0-0 draw against the Reds at Anfield. The visitors registered just one shot on target in that fixture in October, as well as 35% possession. Liverpool went into the game having won their last six games, scoring 16 goals. Mourinho’s defensive approach revealed a coach more intent on foiling his opponent than allowing his own side to express themselves.

Against Southampton on Saturday, it was no different. Liverpool had won four consecutive games, scoring 14 goals. They faced a side looking to subdue, to stifle, to suppress. “We played a very good team,” Claude Puel said after the game. “It was difficult for us.” His side did not have a single shot on target.

The Southampton manager’s comments are becoming more commonplace with each passing week. Claudio Ranieri described Liverpool as “unstoppable” in September; his Leicester side had been thrashed 4-1. Tony Pulis said “they’ve got a great chance of winning the title”; his West Brom side had been beaten 2-1. Alan Pardew spoke of how they were “as good as anyone we’ve played this year”; his Crystal Palace side had suffered a 4-2 defeat. Watford manager Walter Mazzarri explained how they “are the team I’m most impressed by”; he had just witnessed a 6-1 mauling.

A 0-0 draw against a team in the bottom half brings an understandable stain of regret. Were it not for Roberto Firmino’s poor choice of finish, Philippe Coutinho’s understandable lack of energy, Nathaniel Clyne’s errant heading or Virgil van Dijk’s imperious performance, this could so easily have been a victory in difficult circumstances. Southampton are a tough side to manoeuvre, particularly without the delicate touches, incessant pressing and wonderful interchanges of Adam Lallana.

But that there is even a debate as to whether this is a poor result simply shows just how far Liverpool have come. When they started the season as outside chances to finish in the top four, a point away at Southampton would have been viewed as encouraging. It is only because the Reds continue to raise expectations each week that this is seen by some as a complication to a title challenge that no-one tipped them for in the summer. A point could prove valuable come May.

The positives far outweigh the negatives. Dejan Lovren was cast as the villain at his former home, but was excellent. Emre Can, Georginio Wijnaldum and Jordan Henderson managed to mask the absence of Lallana. Some players were visibly jaded after their travels during the international break. The Reds had 15 shots, kept a clean sheet – only their second in the league this season – and remain top of the Premier League table. This is no disaster, no setback. It is a good point secured in a frustrating manner.

That it was achieved against a resilient Southampton will satisfy Klopp. “It was a really good performance against one of the best organised teams in the league,” the German said post-match. Charlie Austin and Nathan Redmond were the only Saints players whose average position was beyond the halfway line; the number of Liverpool players whose average position was in the opposition half was seven by full-time.

The Reds will learn to cope with increasingly defensive approaches from the opposition. They are building a reputation, and this is merely a consequence. It is a compliment that teams set out to thwart them. Klopp has restored the fear factor to this team; that they are ever-improving should worry the rest of the league even more.