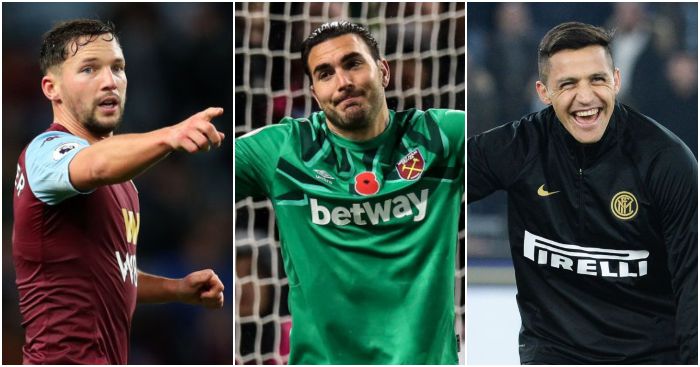 ARSENAL: Dejan Iliev (Jagiellonia Bialystok)
After seeing a loan spell with Slovakian side SKF Sered turn sour, Iliev came back to north London, turned down a handful of League One sides and instead opted for Polish side Jagiellonia Bialystok until the end of the season. Three games, seven goals conceded and no victories later, the North Macedonian keeper got injured. Kick to the bollocks: they have been unbeaten in his absence.

ASTON VILLA: Lovre Kalinic (Toulouse)
After finding himself fourth-choice goalkeeper at Aston Villa despite being a Croatian international, Kalinic moved to French relegation candidates Toulouse, where he controversially replaced Baptiste Reynet. What followed was a series of crushing defeats before Kalinic picked up a thigh injury. Not ideal.

BOURNEMOUTH: Brad Smith (Cardiff City)
It’s been over two years since Australian left-back Smith last played for Bournemouth after his barely believable £3m move from Liverpool. And now he is at Cardiff, where he has got no further than the bench. He did recently assist a goal for the Bluebirds’ Under-23s though, so whoop-de-doo.

BRIGHTON: Percy Tau (Club Brugge)
Two of his three league goals came in August. His last 90 minutes came in September. He failed to score in Europe. He has played barely two hours of football in Club Brugge’s last nine league games. A report in Belgium described the South African striker as ‘undeniably in a form and mentality crisis’.

BURNLEY: Christian N’Guessan (Oldham)
After three successive starts for League Two side Oldham in January, the 21-year-old midfielder has since been confined to the bench, though he did play 50 miniutes in the Latics’ 3-0 defeat to Crawley Town last weekend.

The man has got rid of Gary Gardner and Danny Drinkwater in the space of half a season, and people try saying he’s shit 🤩 #avfc pic.twitter.com/o4NjT49pWD

CRYSTAL PALACE: Connor Wickham (Sheffield Wednesday)
His third spell at Sheffield Wednesday has been utterly underwhelming: No goals in seven Championship games with just one victory to celebrate. Meanwhile, Alexander Sorloth is scoring all of the goals in Turkey.

EVERTON: Mo Besic (Sheffield United)
“Mo is a part of it, that 25-man squad,” said Chris Wilder, but when he name-checks Leon Clarke in the same breath, you know Besic really is nowhere near the Blades’ plans. After starting the 1-0 defeat to Manchester City in January, Besic has not even found a place in a match-day squad, having been usurped by Sander Berge.

LEICESTER CITY: Rachid Ghezzal (Fiorentina)
He was the ‘new Riyad Mahrez’ but he is now literally stuck in Italy and has started only three Serie A games all season without claiming a goal or an assist. “I hope to stay. The fans give great support to the team. Every day I find someone who tells me: ‘Come on Viola’ and this makes me very happy,” he said in November. By March, it seems highly unlikely that they will pay the £8.5m asking price.

LIVERPOOL: Sheyi Ojo (Rangers)
No chance of a permanent deal for Ojo with Steven Gerrard; he has not even started a league game since January. The 22-year-old has been woefully inconsistent – his only Premiership goal came back in August when hopes were high that his England Under-21 potential could be reached.

Sheyi Ojo actually getting past someone 😳😳😳 https://t.co/kov8gMkfqR

MANCHESTER CITY: Patrick Roberts (Middlesbrough)
After half a season sitting on his hands at Norwich, winger Roberts was unusually very happy to be sent to Middlesbrough, where he would surely play some football. He started three games (two draws and a defeat) and then got injured as Boro plunged into a relegation battle.

MANCHESTER UNITED: Alexis Sanchez (Inter Milan)
It’s going so badly (two Serie A starts, one Serie A goal) that Manchester United have had to pretend that they want him back at the club to distract from that massive stupid contract they gave him two years ago.

NEWCASTLE UNITED: Achraf Lazaar (Cosenza)
Eight Serie B appearances for the Moroccan left-back who has not played for Newcastle since 2017. And not one of those Serie B appearances has ended in victory as Cosenza sit 19th and face relegation to the third tier.

NORWICH CITY: Philip Heise (Nuremberg)
He is at least playing some football in Germany, but is largely losing the left-back battle with the wonderfully named Tim Handwerker.

SHEFFIELD UNITED: Ravel Morrison (Middlesbrough)
“Ravel has ability and has done well on the training pitch,” says Jonathan Woodgate, but the midfielder – who played just 12 minutes in the Premier League for the Blades – has started just two of seven games since he arrived on Teesside. It won’t help his cause that Boro finally won with Morrison on the bench.

If Ravel Morrison comes on here then I’ll have seen him and John Bostock play football within 24hrs. Anyone know where Freddy Adu is playing tomorrow?

SOUTHAMPTON: Guido Carillo (Leganes)
He cost Southampton £20m two years ago and did not score a single Premier League goal before heading out on loan to Leganes last season. They must have been super-pleased with his six-goal return because they wanted him back again. This season? One goal in 20 La Liga games as Leganes battle against relegation.

TOTTENHAM: Jack Clarke (QPR)
Tottenham’s unlikely £10m signing spent the first half of the season on the bench at Leeds before swapping that particular piece of Yorkshire plastic for one in west London with QPR. He has at least got off the bench – four times in nine games – but the whole spell can be filed under ‘underwhelming’.

Jerome Sinclair’s match stats for VVV Venlo after coming off the bench in their 3-0 loss at FC Emmen #watfordfc pic.twitter.com/Dtfhnexwi2

WEST HAM: Roberto (Alaves)
He has not played. It’s probably for the best.

WOLVES: Patrick Cutrone (Fiorentina)
A goal in Coppa Italia turned out to be a false dawn for the Italian international, who has now featured in seven Serie A games without scoring a goal. He might be regretting his suggestion that Wolves boss Nuno Espirito Santo was “fixated” on his favourite players.