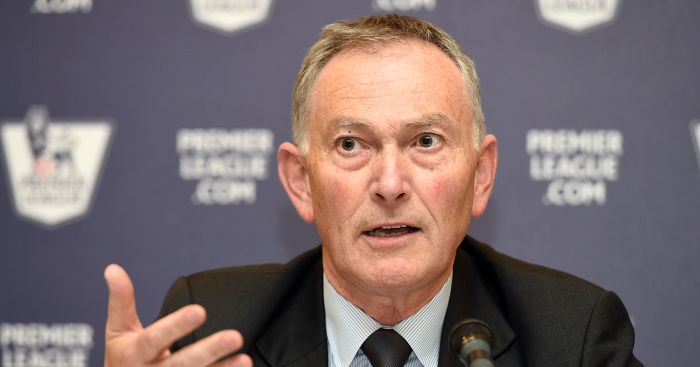 The proposal comes from Chelsea chairman Bruce Buck, who chairs the league’s audit and remuneration committee and led the search for Scudamore’s successor Susanna Dinnage.

Her appointment was confirmed on Tuesday, but it was overshadowed by the news that Buck had informally asked his fellow club bosses to contribute £250,000 each to thank Scudamore for his 19-year record of negotiating bumper broadcast deals.

In a statement, the FSF said: “Premier League clubs have always told fan groups that budgets are planned in advance and there’s not a surplus of cash lying around from their extremely lucrative TV deal.

“In the meantime loyal football supporters continue to be inconvenienced by fixture changes to fit TV schedules, often losing out on travel costs or struggling to get to and from games in the first place.

“Now it appears clubs can stick their hands down the back of the sofa and find £250,000 at a moment’s notice.

“Fans strongly oppose the ‘golden handshake’ and we urge clubs not to make a decision which is hugely unpopular with supporters.”

Scudamore, who has been paid more than £26million during his time in charge, was unaware of Buck’s idea and is understood to be embarrassed that it overshadowed Dinnage’s day.

So far only one club, Cardiff City, has come out in favour of the plan, and it is understood that the proposal will be discussed again today in London where club bosses have gathered for a scheduled Premier League shareholders’ meeting.

The FSF’s objection to the idea follows earlier criticism from fans’ groups including Everton’s The Blue Union and Liverpool’s Spirit of Shankly.

The Premier League has agreed to pay its outgoing boss Richard Scudamore £5million over the next three years in recognition of his “outstanding work”, the organisation has confirmed.

This farewell gift was first proposed by Chelsea chairman Bruce Buck, a close ally of Scudamore’s, but has been widely criticised by supporters, with the Football Supporters’ Federation calling it “hugely unpopular”.

But club bosses, who are meeting in London on Thursday for a scheduled Premier League shareholders’ meeting, have ignored those protests and agreed to the payment.

In a statement, the league said Scudamore’s golden handshake was agreed by the audit and remuneration committee, which is chaired by Buck, and will be spread over three years.

They will also depend on the 59-year-old agreeing to a “comprehensive set of non-compete clauses” in terms of the roles he takes on in the future and that he remains available to his successor Susanna Dinnage “in an advisory capacity”.

The statement added that the payments are also “in recognition of the outstanding work Richard has carried out over the last 19 years” and the league would like to put on record its thanks for his “exceptional contribution to the success of the league”.

Before today’s meeting, Cardiff were the only club to say they backed the idea of giving Scudamore a leaving bonus but Burnley have now joined them.

The club posted the Premier League’s statement about the payment on its website with two additional lines at the bottom of the page.

“Burnley Football Club supports the statement of the Premier League and the rationale behind such payments and the work carried out by the remuneration committee,” it said.

“The club will be making no further comment on this matter.”

The club’s chairman Mike Garlick was on the committee that led the search for Scudamore’s successor, Susanna Dinnage.