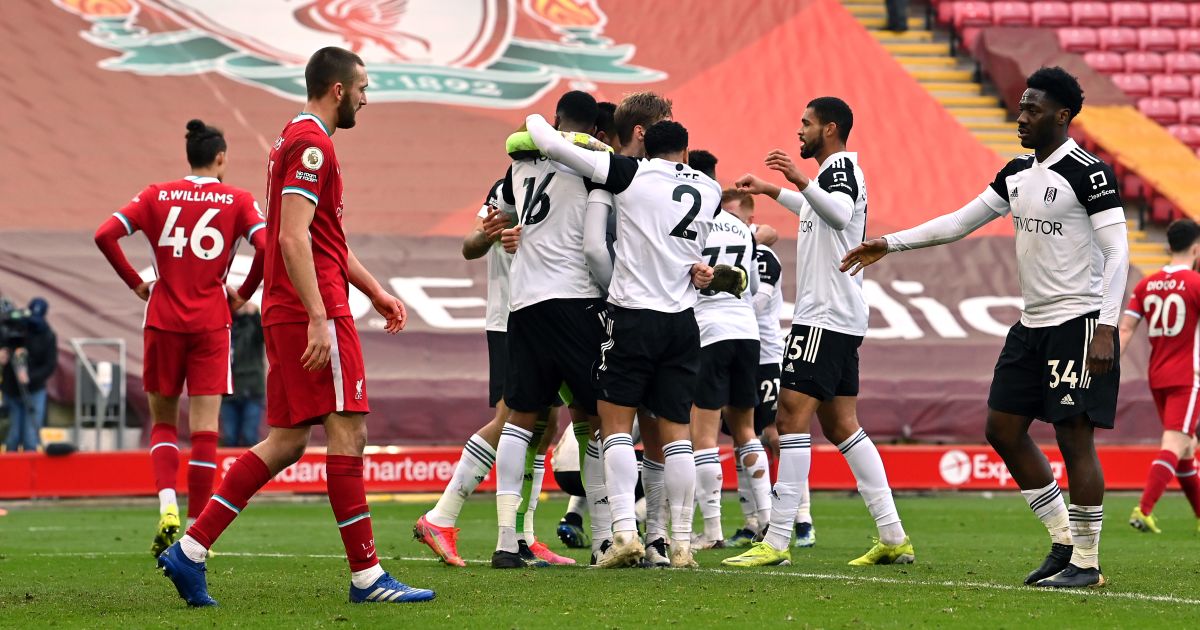 Eight months ago, a plane flew over Anfield during the final home game of an extraordinary season (for multiple reasons) congratulating Liverpool for their crushing Premier League title triumph.

On Sunday, another plane flew over Anfield desperately trying to rally the troops during a 1-0 home defeat to Fulham in a title defence gone horribly, spectacularly wrong. “UNITY IS STRENGTH” it parped, “COME ON REDS”. Presumably they were all out of “LIVE LAUGH LOVE”.

In many ways, you have to step back and just admire this Liverpool run. A 68-game unbeaten home run in the Premier League is the stuff of absurdity. To follow that with a six-game losing streak that includes three of the bottom six and local rivals that hadn’t won here since records began and you elevate it to a piece of performance art.

Just months after being talked about as possibly the greatest Premier League team ever assembled, Liverpool have become quite heroically, monumentally bad. A few hours from now, they could be below Jose Mourinho’s Tottenham, a team that has spent months carefully cultivating a niche as this season’s indisputable banter team yet are now blown clean out of the water by the Reds.

The top four is starting to look out of reach for a team that has lost its purpose and identity. Yes, the much-publicised injuries are an obvious factor in all this, but Jurgen Klopp’s team selection is becoming ever more erratic. It says much for his and his team’s confusion that of the seven changes made for this one it’s almost impossible to determine who has been rested with one eye on the Champions League in midweek, who has simply been dropped and who has just been forgotten about in all the chaos currently engulfing the club. This team was a mess, and the cohesion and understanding that propelled everything Liverpool have done well for two and a half years has just… gone.

From playing lightning football flawlessly, Liverpool now play ponderous football inaccurately and sloppily. Never was the gulf in desire, intent and confidence in this game more clearly displayed than in Fulham’s goal, as Mo Salah dallied on the ball on the edge of his own box to allow Mario Lemina to nip in and rifle the ball across Alisson and into the bottom corner. Sometimes, the most simplistic of football truisms can fit. Fulham wanted it more.

But that was not all. Fulham didn’t just show greater desire than Liverpool, they played the better football. Lemina and Ademola Lookman and Ivan Caveleiro all looked more threatening than Salah, or Xherdan Shaqiri, or Diogo Jota or even Sadio Mane when he was introduced in the second half. The game’s outstanding defender was Joachim Andersen.

There was not the remotest hint of smash or grab about this. Like most games at Anfield over the last few years, this was simply a matter of the better team with the better tactics and better execution running out deserved winners. That today that was Fulham and not Liverpool is not even, based on recent events, that surprising.

Liverpool’s demise will inevitably dominate the fallout from this match, but Fulham’s transformation into actually a pretty decent Premier League team is every bit as remarkable. They gave the league a 15-point headstart but are now probably the best team in the bottom half. You could go further: right now, Fulham are just better than Liverpool. If you wanted a sentence to sum up the trajectory of both sides in recent months, that seemingly absurd summary is it. In their last 10 games, Liverpool have taken nine points; over the same period Fulham have 14.

And Fulham’s obviously expected and predictable win here (ahem) makes Newcastle’s dreary acceptance of a point at West Brom look even worse than it already did, which was very bad indeed, and things look very dicey indeed now for those around this Fulham side in the table.

They are on an extended and quite remarkable run of competence, which is meant as far more of a compliment than it sounds. They lost five of their first six games; the fifth of those, in October, was against Crystal Palace. Since then, they haven’t lost a single game against anyone you might consider a direct rival.

They have lost only two of their last 10 in all, one against a then-flying Leicester and the other, absurdly and unluckily, against Spurs in midweek when they were VARed out of a point and on another day would nevertheless have collected all three.

Scott Parker, despite apparently deciding that a trip to Anfield meant he should wear all of his clothes at once, is doing a truly remarkable job.

Why does Scott Parker buy his jackets from DFS? pic.twitter.com/y9SlQ0C6yw

New signings – both at the end of the summer window and in January – have been shrewdly made and adroitly integrated into a squad that looked to have absolutely no chance of competing at anything like this level when the season began. Even a few weeks ago, when they won at Everton, this still looked like a case of “Probably going down, but fair play they’ve made a right go of it.” Now they’ve got at least an even chance of staying up, with the final-day clash against Newcastle looking like it could potentially be the biggest game of the day. Currently, doubts over that have more to do with whether Newcastle can keep pace with Fulham than the other way round.

As for Liverpool? Their next Premier League game here is against Villa, and it’s Newcastle after that. There’s definitely no history of outrageous and unpredictable Premier League results when Liverpool play Villa, so the losing run is probably going to reach seven, but at least it won’t get to eight. Surely.