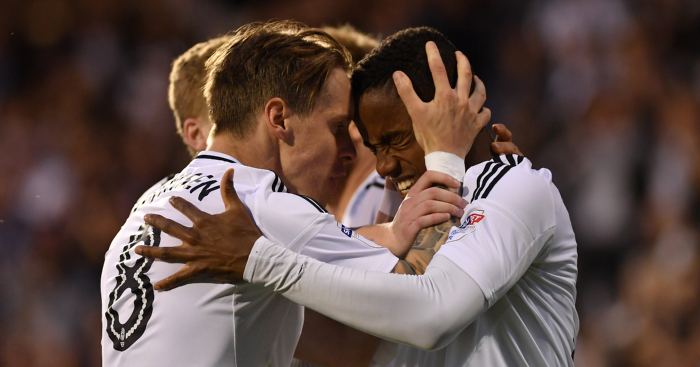 Fulham ended their play-off hoodoo in style by coming from behind to beat Derby 2-0 and put themselves one win away from the Premier League. How on earth did this even happen?

The Cottagers had not won any of their previous seven play-off ties, including Friday’s Championship semi-final first leg, but second-half goals from Ryan Sessegnon and Denis Odoi overturned a one-goal deficit at Craven Cottage and sent them to Wembley.

Sessegnon, tipped for a potential summer move to a big club, will take the headlines but it was an all-out attacking display from Slavisa Jokanovic’s men, who were worthy winners.

Fulham, who have only lost twice since December 16, will now meet either Aston Villa or Middlesbrough at the national stadium on May 26 and are 90 minutes away from a first return to the Premier League since 2014.

The Rams would have wanted to put up more of a fight and they are condemned to an 11th successive season in the second tier.

After a disappointing night at Pride Park on Friday, Fulham were desperate to wipe out their deficit as quickly as possible and they could not have wished for a better chance in only the eighth minute.

The Cottagers showcased their attacking speed as they broke from a Derby corner with Aboubakar Kamara squaring for Sessegnon but the 17-year-old first touch was not great and his shot was too close to Scott Carson, who palmed behind for a corner.

Aleksandar Mitrovic took a while to get into the game, but he soon became a threat and was within inches of an opener 10 minutes before half-time when he superbly turned Curtis Davies on the edge of the area and curled just wide.

The only reason Fulham did not go into half-time at least a goal to the good is due to the heroics of Carson, who pulled off three top drawer saves in the space of five minutes.

First he blocked Kamara’s swerving shot, then tipped over Ryan Fredericks’ dipping effort before saving the best until last when he miraculously kept out Mitrovic’s powerful header.

Carson, though, was finally breached just two minutes after the restart as Sessegnon struck.

A long ball in was beautifully chested down by Stefan Johansen to Sessegnon, who showed composure to slash the ball high past Carson.

The onslaught continued and 19 minutes later the hosts found the goal that put Wembley in sight when Odoi climbed highest from a corner to head home into the far corner.

Having turned the tie in their favour Fulham looked for the goal that would have put it to bed and Kamara had the chance as he beat an on-rushing Carson to the ball, but instead of trying to score he shamelessly dived in an attempt to get the goalkeeper sent off and was the one who was shown a card.

That did not bother the home side too much, though, as their game management was impressive, failing to allow Derby to mount any serious pressure.