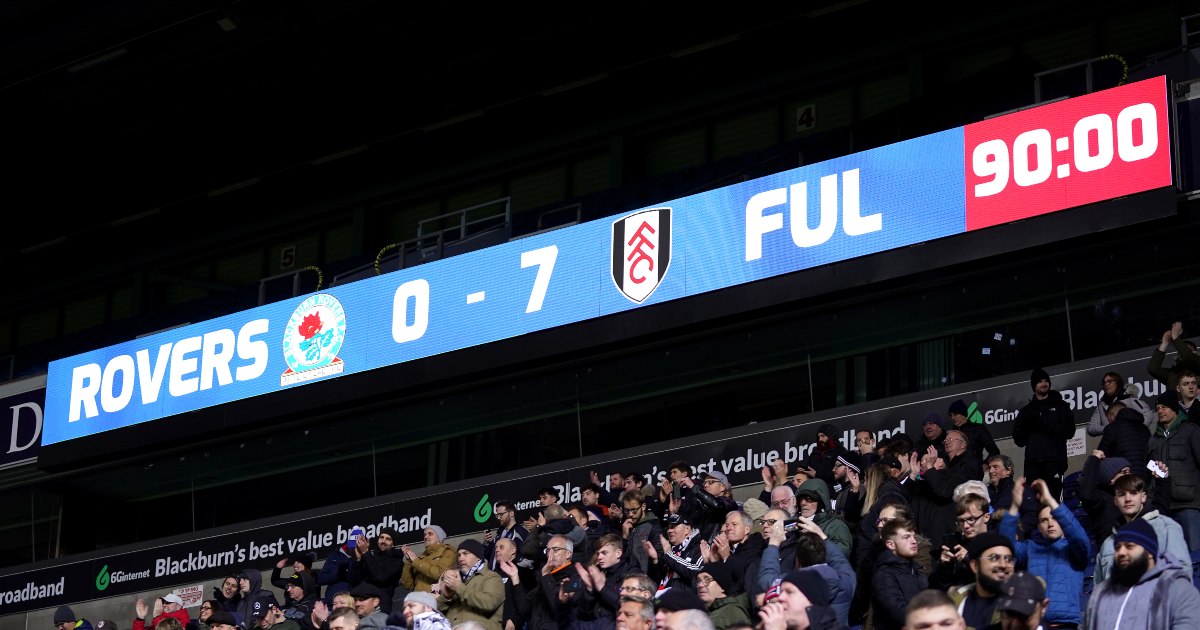 Fulham
A first defeat of the season for Bournemouth was coupled with Fulham scoring six league goals away from home for the first time since 1969. Nice. A seventh was then added for a quite ridiculous score-line which could have ramifications for the rest of the season. Rodrigo Muniz has been an understandably peripheral figure behind 19-goal Aleksandar Mitrovic, but made a name for himself with a late double after replacing the Serbian striker in the closing stages of the match.

This was a result which took the Londoners just two points behind the Cherries and their former manager, who are by far and away the two best clubs in the division this season. It is easy to be burned with sweeping predictions at this stage of the season, but it is difficult to see either outfit not finishing in the top two. On Wednesday night, it was the second-best side so far this season with comfortably the most colossal result of the campaign who made the headlines. They are just two points behind the Cherries with 43 goals scored after just 16 games. Fulham are relentless and they are brilliant. Who can keep pace with that? Perhaps not even the previously impeachable Bournemouth at this rate.

Joseph Laumann
Now that is why you make a managerial change. There is little doubt that having gone 1-0 down to relegation rivals Derby County, the Tykes would have rolled over and had their bellies rubbed by the Rams under previous manager Markus Schopp. Under the caretaker stewardship of Joseph Laumann, a first win since August was the outcome, and it was enough to take the South Yorkshire outfit above Hull City and just one place and one point away from safety.

There are no guarantees that there is long-term success to come under Laumann, but this could prove to be the most important victory of Barnsley’s season, a much-needed springboard after a disastrous start to the campaign.

Ali McCann
Preston have a penchant for signing players who are very much part of a team greater than the sum of its parts. One of the smallest budgets in the second tier consistently does well to not just fight at this level, but thrive too. During Frankie McAvoy’s first full season in football management, the Lilywhites have largely flattered to deceive, but on Wednesday provided one of the surprise results of the season.

A first goal for former Hamilton Academicals midfielder Ali McCann was the second of two fine strikes inside the area for the visitors, and an even finer way for the Scottish youngster to open his account for the club he joined in the summer.

Luton Town
It was Neil Warnock’s big night, but Luton Town were in no mood to throw the record-breaking Middlesbrough boss a party in his 1,602nd game as a manager. They had welcomed him to Kenilworth Road and initiated celebrations in the first half as Boro ended the first 45 with the lead, but the second half belonged to the party poopers.

A three course meal of goals – Sonny Bradley’s close-range starter the leveller, before Premier League-bound Elijah Adebayo hit the main course moments later, leading to Harry Cornick’s sweet third to land Warnock in something of a sticky spot (that’s coming up). Right now, the plaudits are for Luton, who continue to defy their budget and underdog status to be one of the most feared opponents in the division right now. From win to win and strength to strength, Nathan Jones’ side are marching forward while the previous incumbents of the play-off places continue to struggle.

Birmingham City
Birmingham City’s season was in danger of petering out in a similar vein to that of Cardiff’s over the past few months. But the end of October and now the beginning of November has breathed new life into the Blues’ campaign, which is now feeling much more Brum than glum. Having gone nearly 10 hours without scoring across September and October, Lee Bowyer’s side are now unbeaten in four and on a run of three consecutive victories, scoring seven in the process and conceding just once.

In taking down a Bristol City side supposedly on a high from their first home win since January, Birmingham took themselves right into the midst of the play-off run – with roughly a dozen or so teams able to say the same thing. The quality and standard of the Championship may not be the greatest it’s ever been, but for teams like Birmingham, that makes it all the more exciting. It isn’t bad for us neutrals either.

Morgan Gibbs-White
While Sheffield United’s expensive roster of young and talented strikers continue to falter, the Wolves loanee Gibbs-White continues to provide Sheffield United with just enough impetus to keep the Blades from being dragged into a relegation battle. In many ways, he is the Cristiano Ronaldo of Slovisa Jokanovic’s side, more often than any of his teammates scoring at crucial moments to turn defeats into draws and draws into victories, as on Tuesday night. One worries where Sheffield United would be without him. They might just find out in January.

Joel Piroe
For a player who has adjusted so ridiculously well to the Championship in his debut season in the EFL, Joel Piroe’s is a name which so often goes unsaid. At just 22, the Dutchman has nine goals and three assists to his name, his ninth strike of the season sending Coventry to their first home defeat of the season and Swansea very much into the promotion picture.

Again, there is the caveat that there are more teams than not in that particular portrait, but we are beginning to realise why Russell Martin took the shortcut to the Championship with the Swans rather than wait it out with MK Dons.

Piroe meanwhile, has only once this season gone on a stretch of more than one game without direct involvement in a goal. The signing of the summer? He’s up there, just like this Swansea side.

Neil Warnock
1,602 games and not out. It may not have been the way he wished to celebrate it, but this record for most Football League games managed by a single man is a record borne out of each of those fixtures he has been in the dugout for – every win, draw and defeat, not just the most recent. And good riddance to the previous incumbent of the top spot being knocked from his perch. It is far better to play the pantomime villain a la Warnock than be a real one. Here’s to 1,603 and the record growing ever more.

Reading
At half time of a midweek game with Blackpool just two weeks ago, Reading were in cruise control and looking only up, despite an impending points deduction hanging over their heads. 45 minutes later, they had lost to the Tangerines and have failed to score or pick up a point in the three games since. From looking like play-off challengers even with points being knocked off to desperately looking over their shoulders without it, the Royals’ season has turned on a sixpence.

Manager Veljko Paunovic was absent from the fixture with Millwall, self-isolating with symptoms of Covid-19, but it was his team who looked sick, allergic to the opposition goal with nary a shot on target in the capital, finally seeing their poor attacking work undone by a former striker of their own – Benik Afobe – netting a second-half winner for Gary Rowett’s in-form Lions.

There are obvious caveats – Reading can almost name a strong Championship XI from their current physio room – while the bench is chock full of youth team players not yet ready to make a significant positive contribution at this level. That doesn’t change the fact that Reading are beginning to sink without trace. Down the table they continue to go.

Derby County
It is now seven games without a win for Derby County, who squandered a precious opportunity to move off bottom spot for the first time this season. It is the type of defeat which leaves you wondering if they ever will vacate 24th spot in the Championship, before May at least. Having taken the lead through Sam Baldock, Derby relinquished their grip on this six-pointer through conceding sloppy goals either side of half time and now sit four points adrift of new 23rd place Hull and seven points short of Cardiff City in 21st, above that dreaded dotted line.

Only Bournemouth have conceded fewer goals than Derby, but that’s now four goals conceded in the last two games, and we all know that one of the weakest attacks in the division does not have enough in reserve to overcome such deficits. The fans are giving their all in support, but then so are the players. Perhaps this is unfortunately the limits of an inexperienced manager guiding a team of veterans and youngsters with little middle ground in between.

Cardiff City
They may have miraculously avoided a ninth straight defeat at the weekend by coming back from three goals down to draw at Stoke City, but that five-minute salvage was almost put to waste in returning to losing ways and succumbing to a seventh successive home defeat against an inconsistent QPR side.

If those five heroic minutes against Stoke had made it seem as though something of a corner had been turned following Mick McCarthy’s deserved dismissal, then Wednesday night was a reminder of the other 85. It also brought to mind that for all of McCarthy’s faults, this Cardiff squad is genuinely pretty much where it should be. Outside of Kieffer Moore, who is spectacularly out of form this season, there is little attacking talent, while there is no strength in depth elsewhere. It will take a miracle man to get this Cardiff side out of such a mess. If the Bluebirds are to be relegated, it will come as little surprise to anyone with even a passing interest in the blue half of south Wales.

Neil Warnock
1,602 games and out? It may have been a night for celebration and looking back with fondness, but a seventh defeat in 16 games this season has pushed much of the Middlesbrough fanbase to breaking point with Warnock’s reign. Their inconsistency this season was on display in the microcosm of a full match – leading 1-0 at the break, only to lose 3-1 at the final whistle and deservedly so too. Just like Steve Bruce up the road, it may come to pass that a milestone match is quickly followed by the ignominy of a corner flag accompanied club statement.