Home Home Page Front Page Fulham: How on earth did this even happen? 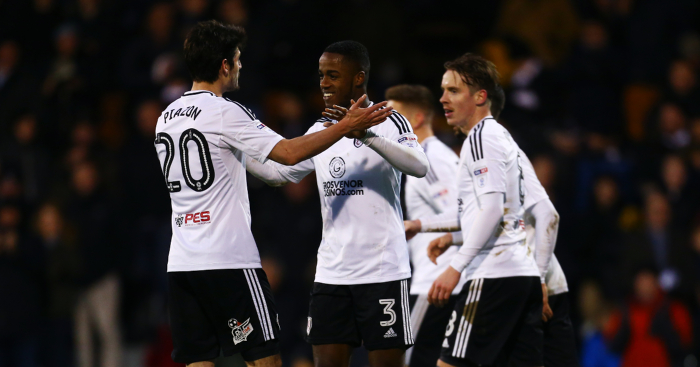 Before the Championship play-offs, we asked Daniel Storey to have a conversation with himself about Fulham. As ever, the answers are long…

It only feels like five minutes since Fulham were being dreadful in the Premier League?
Yes, and that relegation was indeed miserable. So let’s start with a potted history of where it all went wrong.

Fulham’s initial rise to the Premier League was funded by Mohamed Al-Fayed’s millions, but they punched above their weight as standard. If the peak of their powers came with a Europa League final appearance in 2010, the subsequent slump came shortly afterwards.

In the summer of 2012, Al-Fayed made it clear that he wished to sell the club and began looking for a buyer. That was combined with the sale of Clint Dempsey and Mousa Dembele to Tottenham, replaced by a glut of overseas imports who largely flattered to deceive. Dimitar Berbatov was the gem, but even he epitomised a team that was majestic in patches but often too easy to play against. Fulham only slipped from ninth to 12th in 2012/13, but that was just seven points above the bottom three.

Shahid Khan purchased the club in July 2013, and Fulham actually made several signings that seemed to make sense (Darren Bent on loan, Scott Parker for £4m, Maarten Stekelenburg as a new No. 1 goalkeeper), but things soon went south. The decision to sack Martin Jol in December was hardly controversial, but Khan opted for first-team coach Rene Meulensteen as his replacement. Somewhere amidst all that, Fulham paid £12m to sign Greek striker Kostas Mitroglou. Mitroglou played 151 league minutes and never scored.

When it became clear that Meulensteen was unfit for purpose, the mistake was compounded by the appointment of famous disciplinarian Felix Magath. The German won three of 12 league games that season, famously tried to treat the players’ injuries with cheese and Fulham were relegated on the penultimate weekend of the season after a 4-1 defeat to Stoke City.

Right, so what’s changed?
For a long time, not a lot. Fulham have been bobbing around in the Championship’s lower reaches since relegation. Magath somehow avoided the sack, but that soon followed when Fulham sat bottom of the division after taking one point from their first seven matches. His replacement, Kit Symons – something of a club legend – earned the job on a full-time basis after an encouraging start as caretaker, but never really convinced that he merited long-term faith. When Symons was sacked, Slavisa Jokanovic was appointed.

Jokanovic initially moved Fulham away from relegation trouble, and took Fulham into the play-offs in his first full season. Defeat to Reading over two legs was disappointing, but Jokanovic had at least earned Fulham their first top-six finish in any division for 16 years despite the sale of top scorer Ross McCormack.

One important thing to note is that Jokanovic persuaded Khan to invest £4m in the club’s training ground facilities in summer 2016, both to allow for better match preparation and recovery and to make the club more attractive to potential signings.

But the biggest change at Craven Cottage happened four months into this season. With Fulham floundering again – they were 15th as recently as December – Jokanovic won his battle with owner Khan to gain control of the club’s transfer dealings. Until that point, the majority responsibility had fallen to the club’s director of statistical research Craig Kline, a friend of Khan’s son.

Last summer, Fulham signed players from the Portuguese, French, Spanish, Belgian and Russian leagues, a policy Jokanovic vehemently disagreed with. “I need people who know about driving the car in the English style,” he told the Independent. “Who know what life in England is.”

In January, Fulham signed Aleksandar Mitrovic (who Jokanovic knew from Partizan Belgrade), Matt Targett from Southampton and Cyrus Christie from Middlesbrough. It is no coincidence that the longest unbeaten run in the club’s history began with Jokanovic’s victory in that power struggle. Suddenly, everyone at Craven Cottage was pulling in the same direction.

They certainly feel like the neutral’s favourite for the playoffs?
Yes, they really are. Part of the reason for that is that Fulham are the perennial neutral’s favourite. They are a charming club with a charming ground, steeped in history and with affiliations to some of the great and good of English football history. There is nothing offensive about them, and every Premier League away supporter looks forward to a day by the Thames and prays for August or May.

Most obviously, Fulham ‘deserve’ promotion the most. They finished five points ahead of Aston Villa in fourth and 13 ahead of Derby in sixth, and lost only eight games all season. Villa and Derby lost 11, Middlesbrough 14.

There’s also the manner of Fulham’s rise this season. Not only did Jokanovic take the club on the longest unbeaten run in their history, he has done so with some pretty attractive football. Fulham have scored 79 league goals, second only to champions Wolves, and Jokanovic prefers sharp passing through defence and midfield finished by Mitrovic’s uncompromising physicality. The Serbian has been sensational since dropping down a division in January.

In fact, Fulham are conspicuous as the odd ones out in the play-offs. While Villa and Middlesbrough have spent big (Boro bought five players for £5m or more this season, Villa bought six last season) and Derby have pretty much done what they have always done, Fulham have approached things a little differently. Young players, experienced heads and loan players in near-perfect symbiosis. There is a feeling amongst neutrals (yes, this is oxymoronic) that Fulham’s strategy merits reward.

His speed, dribbling and shooting (he’s certainly more of a left winger than left-back) are extraordinary, but what makes Sessegnon most exciting is just how mature he is for a 17-year-old. Every time Fulham have piled a little more responsibility upon his shoulders, the young man keeps on performing.

But don’t be fooled into thinking that this is a one-man team. Mitrovic is the division’s 14th top scorer – and Fulham’s second highest – despite starting his first league game on February 17. Fulham rejected a £25m bid from Newcastle United last summer for Tom Cairney, and he has shown again why that was a sensible move. Tim Ream and Tomas Kalas have played the experience/relative novice central defensive partnership perfectly, while Kevin McDonald might just be the Championship’s most underrated player.

“We understand better and start to trust each other, we start living like family, all together, and it’s more positive,” said Jokanovic in February. “We are ready for fighting for each other, more than what we were doing in the past and we have a clearer idea on what we must do in the game.”

Would Jokanovic stick around this time?
I see your line of questioning here. Jokanovic was the Watford manager who took over in October 2014 and within eight months had taken them to automatic promotion to the Premier League. It is widely considered to be a mistake on the part of the Pozzo family.

But it isn’t quite as simple as that. Jokanovic was only appointed on a short-term deal, and his contract expired at the end of the season. Reports suggest that the Serbian asked for a whacking great payrise that Watford’s owners were not prepared to match, and so they looked for another option.

Understandably, Jokanovic tells a slightly different tale. “I felt he [Gino Pozzo] didn’t have a real will to renew my contract,” he told The Sun in 2015. “My priority was to stay at Watford after promotion. It made sense to think that way. What happened next made me realise there was no real intention to renew my contract. There was a first contact but there wasn’t a follow-up from him, which should be normal in any negotiation process. After waiting, I assumed that I had to move on.”

Whatever the reality of that situation, Jokanovic was pretty adamant that he wanted to return to English football, and we can presume that the Championship was not his dream. If that gives Fulham’s manager added motivation to secure promotion, it can be no bad thing.

So will they be quaffing champagne by the Thames on May 26?
They are certainly the clear favourites at 7/4, and history is just about on their side. In the 26 seasons where the second-tier play-offs have involved four teams placed third to sixth, the team in third leads with nine promotions.

Fulham are the team in form too – ish. They took 59 of a possible 72 points between mid-December and the end of the season, 13 points more than any other play-off team over the same period and 25 more than semi-final opponents Derby. Fulham lost one of their last 24 league matches of the season; second best was Wolves with four.

And here’s the ‘but’. That single defeat came on the last day at St Andrews. For all the excellence of Fulham’s run towards the end of the season, the one match where it actually mattered produced a fairly dismal performance. If the play-offs is a series of cup finals, Fulham lost their own preliminary final to Birmingham City.

Which is what makes the playoffs so bloody brilliant. If the misplaced cliche is that penalty shootouts are a lottery, the playoffs sometimes really do feel that way. Quality matters, of course, but this about bottle. Sit back, relax, and let the madness begin.